This all started with a simple question I asked on my Twitter:

With such a small number of responses the results were hardly definitive, But there was something of a clear trend.  Reader Dawnstorm tells me that the results may just be random, I’ll take his word for it. That lead me to post the same poll here at the Lounge last week. 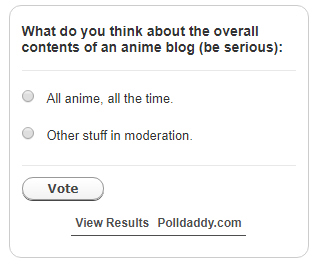 I half expected the trend to continue…  But I didn’t expect this:

Even though it’s still a small number of respondents (14, and thus still suspect), the trend is even more clear.  Readers like a blog that at least contains some things other than anime.  This never was a referendum on the future of the Lounge, but it’s nice to see what I’ve been doing is liked.  (On the other hand, since the poll was of my readers there’s no doubt a bit of bias and self selection going on…)

Thanks to those who took part!  Drop a line down in the comments and tell me what you think!

3 thoughts on “The Curiosity Poll – results!”