Well, it’s the first day of Fall today and we’ve already had our first round of cold and rain here in the Pacific Northwet.  That fits perfectly with this week’s summer season shows, which are almost all finale or penultimate episodes. 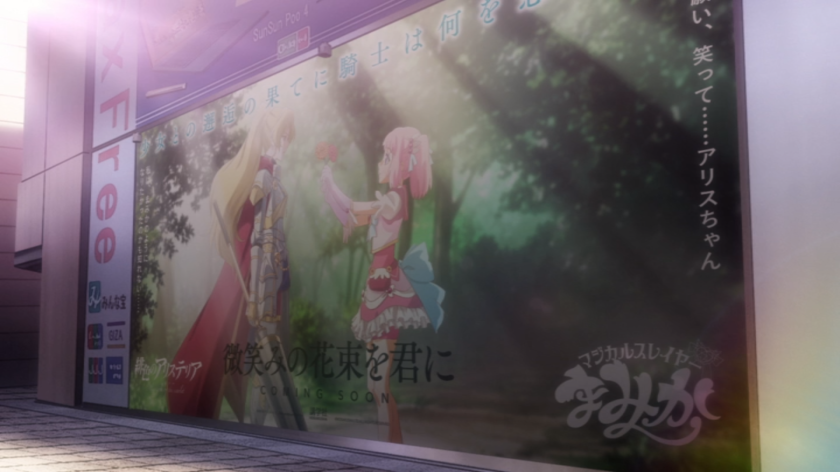 Let’s hit the jump and get right to it!

As unsatisfying a final episode as I’ve seen.  The first half was a Deep And Serious conversation between Yukari and Ririna, which mostly just covered ground already well trodden.  The only ‘surprise’ was the reveal of yet another loophole in the Yukari System.  The second half was pretty much the three main characters professing their love and desire for each other…  The whole episode could have taken place anywhere in the last seven weeks or so without seeming out of place.

At least the characters weren’t quite as badly off model as they’ve been the last couple of weeks, so there’s that.

No less intense than ep 10, though thankfully much less brutal.   The two big things I came away from this episode with…

The first is Reg.  We got further confirmation that somewhere in the past, he’s intimately connected with Lyza.  He wasn’t just watching her as intimated in the papers of her returned from the Abyss in the first ep, but actively interacted with her.  Did she fake her own death?  There’s something very funny going on there.

The second is Mitty.   He (or it’s hinted it may be she) may lost his humanity, but he’s still very much a living creature.  He reacted very positively to Nanachi’s (obvious) affection.  I find this profoundly moving, and profoundly disturbing.

Two eps (one normal, one double length) remaining, and many mysteries left to clear up. They almost certainly won’t, as this is an ongoing manga… But they wouldn’t break our hearts with a cliffhanger would they? This is Abyss, they just might.

If I didn’t know this wasn’t filler, I’d say it was filler…  It seemed designed to dispose of the remaining tests for the members of Class 1-A not yet covered as quickly and efficiently as possible.

Just WOW…  With tons of action and intrigue and building on the characters, this was a busy, busy episode.

I expected Ange to volunteer to be the one to carry out the hit on Princess.  And I expected them to try and evade her bodyguards/watchdogs.  (And the evasion and the fight  sequences were nicely done to boot!)  I expected the Princess to decline to run (that was shown way back in Ep 2)…  But I didn’t expect her to so viciously reject Ange’s overtures.  A few episodes back, she said she was “one of the bad ones”, and this episode she showed what that really meant.  Princess want the throne so badly, she’s willing to destroy the re-union that’s her main motivation for grabbing the throne in the first place.  She’s finally snapped and forgotten who and what she is, and her reasons for doing what she’s doing.

This does not bode well for the future.  I can see the two of them making up, but it will be a long time (if ever) before their relationship returns to anything like it was before.  I’m hoping they don’t go the cheap route on that.

Speaking of the cheap route…  They did indulge in one trope, Breaking Up The Team.  This usually leads to a Dramatic Appearance in which the team spontaneously re-assembles.

As expected, the finale was all about the victory lap.  All of the surviving Creations made their peace and had their final farewells with their Creators.  Blitz was a bit of an asshole about the whole thing, but that’s actually consistent with his character.  Their returning ‘home’ bothers me a bit…  they’ve had free will, and now they’re returning to their chains?  That’s a bit disturbing.

One big plot hole, after being put on a bus two episodes back, Magane vanished from the show entirely.  The weekly reviewer over on ANN points out that like Meteora she’s almost certainly depowered, so there’s that…  But it’s sloppy writing.  She’s still a murderous psychopathic bitch and you’d think the government wouldn’t want her just wandering around unsupervised.

And I can’t be the only one hit in the feels when this flashed across the screen – or who thought to himself “I’d watch the hell out of that”.

As much as I’ve criticized Sakura over the past weeks, they managed an oddly satisfying ending.  Despite the show’s assorted flaws, in the end they managed to hit all the right notes.

The highlight of the episode was the production of Maki’s play.  They didn’t show us the whole thing, but we’ve heard enough of the legend and seen the rehearsals to follow along.  It didn’t occur to me until today how the legend mirrored Yohshino’s arc – from the rejection of the outsider, through struggles, to acceptance.  (Further made plain by the birthday party in the previous episode.)

Ririko’s performance of the Dragon Song was beautiful, serious kudos to her VA, Chiemi Tanaka. All the villagers who’ve been with us through the show were given quick callbacks as the camera panned through the crowd.

The back half of the episode was pretty much the usual farewell stuff.  The Queen and her court recounting their memories and looking forward to their future plans.

My only complaint was the ‘Sister City’ plotline being essentially dropped, especially after it was used to provide (force) such drama in the first half of the episode.  Well, that and skipping the carvings in the train station again.  That’s very odd considering how carefully they built on and called back everything else over the course of the show and in the finale itself.

Dropped after 3 eps, no motivation to go back. I haven’t watched it in weeks, so this makes it official.

Next week’s post (the 29th) will be delayed, probably until Monday (the 1st), so I can include the Abyss and MHA finales.  I have another meeting next Thursday, so that will also let me include the Konbini finale.  I think I’ll try and have the first batch of season reviews available by Friday instead.