I’m trying to get each week’s cover screenshot be important and reflective of a show that week rather than just repeating a shot already used in the post…  And I think once you’ve read my review, you’ll agree with this choice.

That being said, let’s hit the jump and dive straight in!

That was…  something incredible.  Something I’m having a hard time even finding words to describe.

I keep having to take breaks from writing about Yorimoi. Rewatching parts of the ep for screenies, etc… the fecking onion ninjas keep interrupting me.

After some delay, I think I can sum it up though.  This episode is essentially Shirase’s final steps on a journey she was eager to make, but now dreads finishing.  Not in the way you or I might hate it when a long awaited vacation is over, but because there is no happy ending for her.  She knows she will either find the thing she’s been avoiding confronting all these years – or that she’ll find and feel nothing.  Both potential outcomes are almost too terrifying for her to consider, there won’t be a happy ending either way and there are no other options.  And she knows it right down to her bones.

The middle segment of the show concentrates on the journey…  But I think this scene (and the check-in that precedes it) mark the turning point for Shirase.  I think she knows the bare outlines of her mother’s death – and here it hits her right in the gut.  She’s not only where her mother stood, but she’s in the same exact situation.  It’s all too real.

But balanced against that in the scenes that follow are Shirase’s conversation with Kimari and her letter to her mother.  I think there is where her journey truly ends.  Despite her mother’s death, she is not alone, and never will be again.  Now she has the confidence and courage to face what’s been avoiding – but no longer needs to. Am I the only one who sensed the onion ninjas gathering in the shadows at this line?

And from there it just didn’t let up, then final scenes hit me like a brick. The final scene…  using Shirase’s emails to show her connection to her mother and her acceptance of the terrible truth she’s been avoiding all these years?  Sheer brilliance, especially coming on the heels of a scene of her writing one of those emails admitting to herself how much she’s grown and changed.  It brought everything home practically perfectly.

Unless they somehow manage to wildy blow the epilogue episode next week (and I have every confidence they won’t), Universe has won the race for AOTS on the strength of this finale.

Nothing else even comes close.

This was… a very frustrating episode.  It was good to see Elias accepting the help of the Fae Folk – but only on his own terms.  It was kind of expected to see headstrong Chise charging off on her own hook.  But flopping Cartaphilus/Joseph’s backstory into the middle of all this…  If it was meant to give the audience sympathy for the poor bullied boy, at least on my part it failed.  We should be wrapping things up here in the penultimate episode, not haring off all over the map.

At its heart, citrus is a trashy soap opera – and never more trashy and soap-y than this week.  We’ve barely got the last love triangle sorted out, and the show eagerly leaps straight into another one.  And who didn’t see the vertices of the triangle coming ten miles off?  Unusually, they had a shot at abundant fanservice in the bath scene but went for something more like a character study.  It fell on it’s face as there’s been insufficient character development to make it work.  And with that – I’ve finally figured out what niche citrus fills for me in this season’s line-up:  the trainwreck I just can’t tear my eyes away from.

Mummy is basically at it’s best when it keeps the camera on the cute monsters (particularly Mii-kun) doing cute things.  While it was better at that this week than some past episodes, I can’t help but think that adding yet another character at this late date is just too much.  In my mind, ensemble comedies do better with a more compact cast.

Also, in my wanderings this week I saw this video on the Crunchyroll forums – the main cast’s voice actors dancing as their characters do during the ED.  The song is “Rosetta Stone (ロゼッタ・ストーン)” by Iketeru Hearts

This week March took another of it’s patented plot zigs, but it works nonetheless.  After the remind-yourself-to-breathe finish of the Burning Field/Yanagihara arc, it seems like an odd break to take…  But really we needed that break.  And beneath the placid surface was some Really Important Stuff.  They took time to show that actions (in this case bullying) have consequences, and that even though the show is broken into neat little segments the lives being depicted – aren’t.

The also slid in a quiet reflection of that theme into Grandpa Kawamoto’s brief interior monologue as he thinks back on the loss of his wife and daughter.  But he also takes comfort in how Akari and Hinata are growing past that and finding lives and joy of their own.  Outside the confines of the episodic format, the cycle of life continues.

And does anyone else wish Grandpa got a lot more screen time than he does?  It strikes me that he has some interesting stories to be told too. 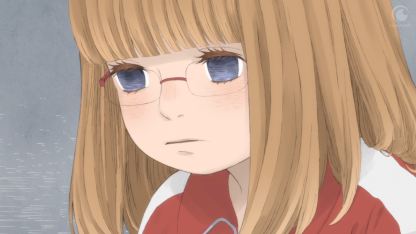 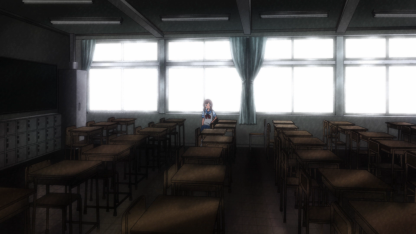 I was struck by the idea of making a triptych of the three girls and their final appearances in the episode…  I can’t put my finger on why my heart is telling me this is important, but I know it is.  Your thoughts?

I’d lost track of how long their hiatus would be, and when they would return.  When I went to look it up, I realized that I didn’t actually care.  In this case absence didn’t make the heart fonder, it made the heart wonder why it was still watching in the first place.  A two week hiatus won’t make up for the serious pacing issues or the show’s other faults.

It’s a shame really, they had some great ideas but the overall execution was lacking.

More ramen related hijinks.  I loved how Yuu was working so hard to replicate the ramen of her youth – and even though it was a near miss, Ms. Koizumi was able to identify it right off the bat.  The rest of the episode, focused on Ms. Koizumi was pretty good too…  even though she’s mostly an unlikeable character, I enjoy her single minded focus more than Yuu’s obsessiveness.

Summer break and everyone goes to the festival, standard CGDCT fare. Competently executed except for Tama’s bits, which were pretty dang good.  She is a very genki girl after all.  But…  they checked in with pretty much everybody who had a speaking role at some point in the season, making it feel like a finale.  Being the next-to-the-last episode, I guess that works and the actual final episode will be an epilogue.  Slow Start is an ongoing manga it so can’t really wrap things up, so I bet Hana will not reveal her “secret”.

This episode is actually pretty easy to describe succinctly – take all the best parts of the past ten episodes, give them cameos, and you have this episode.

It’s still the best food show of the season…

And the girls get comfy…

Etc… etc…  They even managed to work in Rin and Satou’s easy and humorous relationship via text messages.  I think the only schtick that was missing was Nadeshiko’s “country grandma” routine.  I also think it would have been out-of-place, as that’s her “thing” she shares only with Rin.

I can’t figure out why Toba-sensei was there though…  Since the manga is ongoing, she probably plays a role there.  A minor oversight in an otherwise well done episode.

I apologize for the brevity of Yuru Camp‘s entry.  It was the last one I wrote, and it followed right on the heels of writing about Yorimoi and at this point I’m all done in.  Writing that entry took a lot out of me, because working through the episode to check events and gather screenshots brought all the feels and onion ninjas right back again.

Yeah, no, I don’t work through the shows in any kind of fixed order.  Mostly it’s as inspiration strikes me and/or the spirit moves me.  Often I leave the hardest for last.  Some weeks, I spend a great deal of time avoiding writing/thinking about a particular episode… and that was certainly the case here.

For those following the story of our guinea pigs, things are going well (crosses fingers).  We took Anna and Clara (the new girls) to our vet and they got a clean bill of health.  There’s some lingering problems from their previous situation, but nothing that won’t clear up now that they’re in a better one.  Dr C. agrees that we can lift quarantine this weekend.  I’d prefer at least another week, but we think Abby (who is alone with Molly and Emma passing) is depressed with being alone… so we’re going to introduce them this week and (hopefully) get them all in the same cage (crosses toes).

Anyhow, how did your week go?  What did you think of this week’s shows?  Drop a comment and let’s chat – the comments section is your forum.