There’s a ton of “what if ________ had an anime opening” videos out there…  But this one goes above and beyond the call.

Hit the jump for more!

First it hits the basics, the studio name and the anime title…  A surprising number muck up one or the other (or both).

The actor credits (I can’t read kanji, so I’m guessing here…)  are particularly well done, giving us a brief glimpse of each character. 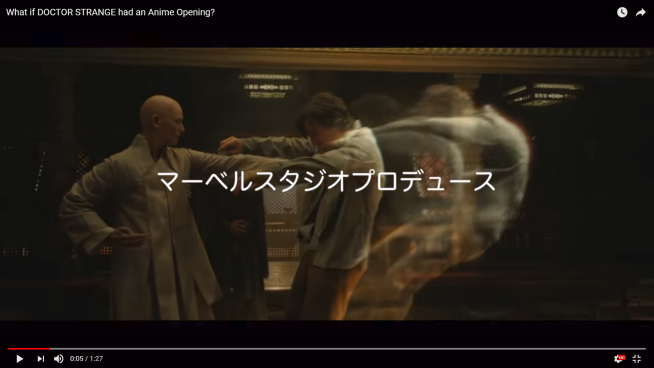 Then there’s a nicely done montage of events from the show.  We get a good look at the characters in action.

What impresses me the most is the way the maker matched the action beats and scene changes to the rhythm and beat of the music.  This is not easy, and it’s something often overlooked…  But it’s also part of what elevates an AMV (or an anime opening) from “good” to “great”.

Overall, If there an actual OP…  I’d say it would leave me pumped and ready to watch the show.  (After all, that’s one of the OP’s most important functions.)  It would definitely be an opening I’d watch every single time.  Probably even if I were marathoning the show.  (Long time readers will know that’s a rare honor.)

What’s your thoughts?  Drop a comment and let me know!

8 thoughts on “What if Dr Strange had an anime opening?”