Aaand… its that time again! Mid-season, when I take a look at what I’m watching, where it’s been and where it’s going.  Some shows are keepers, some… aren’t.  Which is which?  Hit the jump and find out!

The shows that I am watching are in bold, shows my wife and I are watching together are in bold italics, marks dropped shows and (*) marks shows that are watched but not regularly reviewed.

I kept the episode reviews I’ve written but not posted over the last couple of weeks….  No sense in wasting them!

Over at ANN, Christoper Farris (who is reviewing the series) raises an interesting point – doesn’t it feel like the anime should be selling something?  It hadn’t really hit me before, but now that I’ve seen it I can’t unsee it…

Midseason thoughts:  Endro~! is an enjoyable piece of fluff… but in the last couple of episodes, it’s starting to zig a little bit.  The Princess will make a nice addition is they actually do something her character…  And I’m not sure how to feel about the attempt at ‘humanizing” Mao, who has previously been cast as an antagonist.  It’s really at it’s best when it sticks to core party and their antics.

Episode 4:  After all the buildup about how Gripen was due to be scrapped if she couldn’t perform, she didn’t really perform and they just (mostly) blew it off.  Basically, plot armor sucks.

Also, as foreshadowed a mile off…  Kei took to the air with Gripen.  (Why does a robot plane have a second cockpit anyhow?)  And survived G-forces and maneuvering that should have put him intensive care.  Basically, plot armor sucks.

Girly started off interesting, but it’s on track for a mid-season drop.

Episodes 5-6: While Girly has avoided the worst of the harem tropes, it’s still…  pretty darn generic.  Now the tsundere has arrived on the scene, adding pretty much nothing worthwhile to the mix. 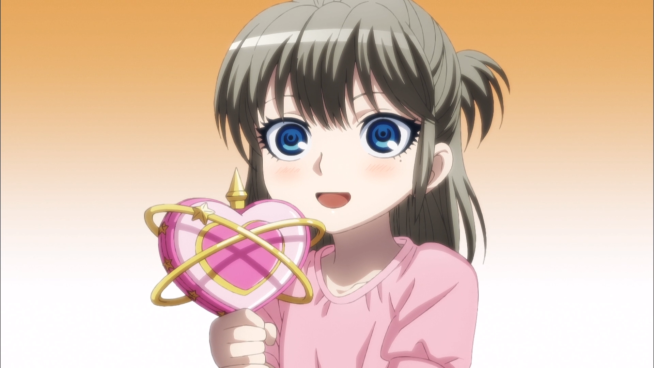 Many bloggers have discussed Asuka’s dream of becoming a Magical Girl and how that dream has turned to ashes…  But something occurred to me this morning.

You know who Asuka reminds me of?  Phosphophyllite (Phos) from Fall 2017’s Land of the Lustrous.

Like Phos, Asuka has gotten exactly what she wanted.  She’s become a Magical Girl, and by helping to win the Disas War she truly did protect and save everyone.  But achieving that dream has come at a terrible price.  She’s suffering from all she’s seen and done…  and she no longer has the energy to look forward to and hope for tomorrow.  That’s made all the worse as it’s becoming clearer to her that her war isn’t over.  It may never be over.

Another side thought on Episode 6:  The news report in the background mentioned illegal sorcerers…  Which implies that legal sorcerers exist too.  Why doesn’t the M-Squad have any on the team?  Or have we not seen the whole picture yet?

Midseason thoughts:  Though I’m enjoying the journey I’m still not sure where they’re going with this…  They’re still moving pieces across the board and the endgame is not quite in sight.

(*) My Roommate is a Cat / Doukyonin wa Hiza, Tokidoki, Atama no Ue

Midseason thoughts:  I haven’t been writing about this series much, but I am enjoying it.  At first I thought duplicating the action from Haru’s point of view was a bit much, but they’ve expanded that considerably and now it seems to work much better.

Me being me, I looked up Tachikawa Airfield (the start and finish up the qualifying course in eps 15 & 16) and discovered something fun:

Right next to the airfield is the Polar Science Museum seen in Episode 3 of A Place Further than the Universe.

Episode 17 – The previews made this look like it was going to finally be the character episode for Jota & Joji…  Instead they were kinda pushed into the background so we could revisit the question “why do you run?”.  I guess it’s an important question, given they have a snowball’s chance of winning the race.  It’s a sports anime, so odds are they’re going to win it…  But I kinda wish they don’t.  One of the most brilliant part’s of the finale of Sound Euphonium’s second season is that they while they met their goal of performing in the Nationals – they only took bronze.

Episode 18:  A lovely slow building of tension as race day approaches…  I had guessed that Prince would run the first leg (allows the other runners to make up for him), but I had the last two reversed.  I guess it makes sense that Haiji would put himself in the anchor position – pride of place and all that.

But what’s up with that cliffhanger?

Current thoughts:  (Can’t really call them midseason thoughts)  What can I say but I’m still enjoying the show overall.  I can’t speak for the characters, but so long as they finish the race I think I’ll be pleased.

Current thoughts:  (Can’t really call them midseason thoughts)  I’ve spent the last few years listening to light novel readers go on about how awesome the Alicization story is…  And as we approach the middle of it’s planned four cour run, I’m not feeling it.  I’m a fan of SAO, but my commitment of time is not being rewarded.

The Price of Smiles / Egao no Daika

Midseason thoughts:  On one hand, I want to echo the thoughts of some folks that this series has been a slow burn – possibly too slow.  On the other hand I can’t think of anything that could really be cut out.  Some minor scenes could be trimmed a bit here and there, maybe saving as much as a full episode.  So, it’s more like a chess game where the action is unfolding in slow motion.  You can’t really cut much without affecting the flow and turning it into a different show.

Speaking in chess terminology – it’s fascinating how both Stella and the Princess are being portrayed as pawns.  Neither actually has much room to maneuver or act on their own.  In the case of the Princess, it’s even crueler as she’s been allowed to maintain the illusion of being in control and having freedom of action.

I’ve blown a bit hot-and-cold over the show so far, but I can’t deny that I look forward to each episode.

THE PROMISED NEVERLAND / Yakusoku no Neverland

That twist was not unexpected…  But that doesn’t mean it wasn’t a brutal punch in the face.  And now the conspirators face a serious dilemma…  One that’s going to be difficult to handle considering Emma’s desire to save everyone.  Her desire to see the sunny side is going to be real trouble.

One other fronts…  The confrontation between Mother Isabella and Sister Krone was interesting.  Isabella seems to know of Krone’s intentions – and is keeping her on a very tight leash.  (Which just pisses Sister Krone off to no end.)  I had tagged Gilda a mouse, but she’s shown unexpected strength of character.  Don on the other hand, they took the camera off of him.  I don’t know quite what to make of that.

It should go without saying that this is a show where you can take nothing for granted.

Midseason thoughts: I’d have to say that Neverland leaves me conflicted…  I’m enjoying it on the whole, but the constant cliffhangers are getting a bit wearying.  I’m finding it intriguing and interesting, but in some ways I’m not looking forward to it if that makes sense.

The Quintessential Quintuplets / 5 Toubun no Hanayome

It’s interesting that it’s Itsuki who keeps who keeps getting involved in the Uesugi family’s home life…  And now she’s been confronted with the reality of how the ‘other half’ lives.  Kudos to her for not being a snobby b_tch about it.

The festival episodes were fun…  and interesting to see the lengths that Fuutarou will go to support the girls.  How much is him slowly falling for them, and how much his desire to show Nina that he supports their family?

Either way, I loved the ‘private’ fireworks at the end.  The girls are a family, and they don’t want to forget or mess that up. 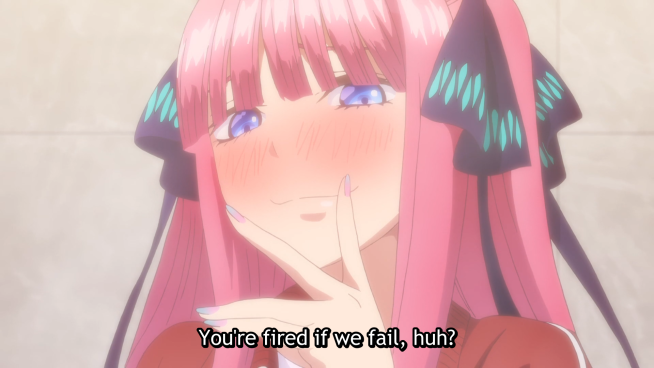 Episode 6:  It couldn’t be smooth sailing forever…  I’m curious to see how he can win Nino over.  She’s the most implacable of the quintuplets.

Midseason Thoughts:  Quintuplets remains a fun little romance show while avoiding most of the tropes typical of the harem genre.

Watched but not reviewed this week:

For midseason status…  neither are particularly bothersome, so they’re keepers.

And there you have it!  What are your thoughts?  Drop a comment and let’s chat!