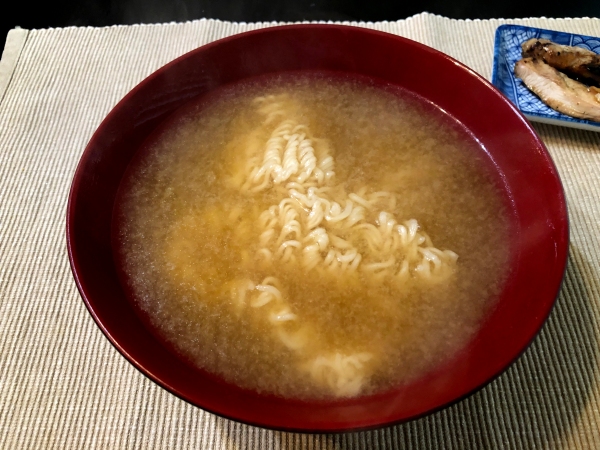 Long time readers will probably recall that I love food & cooking and am fascinated by Japanese cuisine…  I’ve been wanting to make ramen for a long time, but authentic ramen is so daunting!  Then, last week, an opportunity fell into my lap to make a basic bowl from scratch.

Grab your chopsticks, hit the jump, and let’s dig in!

First up…  confession time.  I actually kinda like instant ramen. 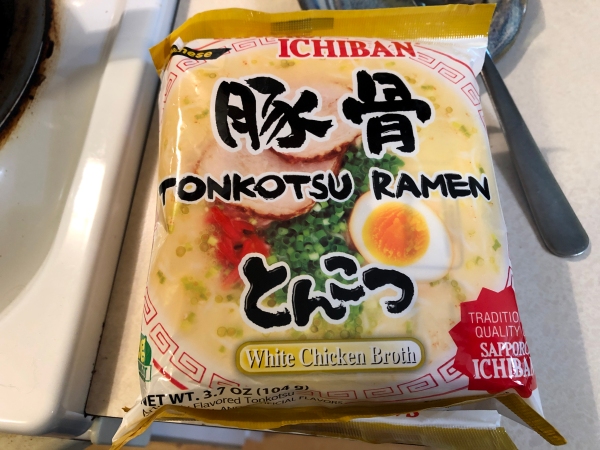 We found a slightly-better-than-usual style at the local Asian grocery…  Still not at all healthy, but not quite as salty and it definitely has a better taste.  I prefer the miso flavor, my lovely bride prefers the tonkotsu.

(I apologize with the quality of the photos, they were shot with my phone on the fly…) 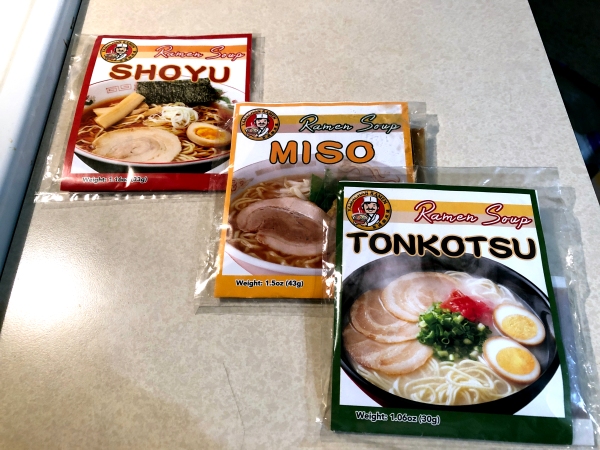 These have started showing up at a grocery store some distance away…  They’re packets of ramen soup broth, pastes rather than dried.  They’re a bit spendy, but they are sooo tasty.  I’m in love with the miso and shoyu flavors.  (There’s also a seafood flavor that’s pretty good, but it’s practically always sold out…)

Anyhow, as I said, I’ve been wanting to make an authentic version from scratch…  but it’s insanely complicated and time consuming for just a few bowls.  Then, last week, I was braising some pork shoulder to pull it and freeze it, and ended up with over a quart of really good pork stock.  There wouldn’t be room in the freezer for both the meat and the stock, so I was in a quandary because I didn’t want to just toss something so tasty.

Then it hit me…  I could make ramen!  What I didn’t use for ramen ended up with some of the meat in curry rice.  (But curry rice is a topic for another time.)

There are four main components of a bowl of ramen, so I’ll just run them down…

– Toppings:  I didn’t use/make any toppings.

– Noodles: I just used the noodles from instant ramen because I had them on hand.  I’m not fond of any of the recommended substitutes  and I can’t get fresh in my neck of the woods.

– Stock: The broth that makes up the bulk of the soup…  In this case, pork shoulder stock, 2 cups (500ml) per serving. 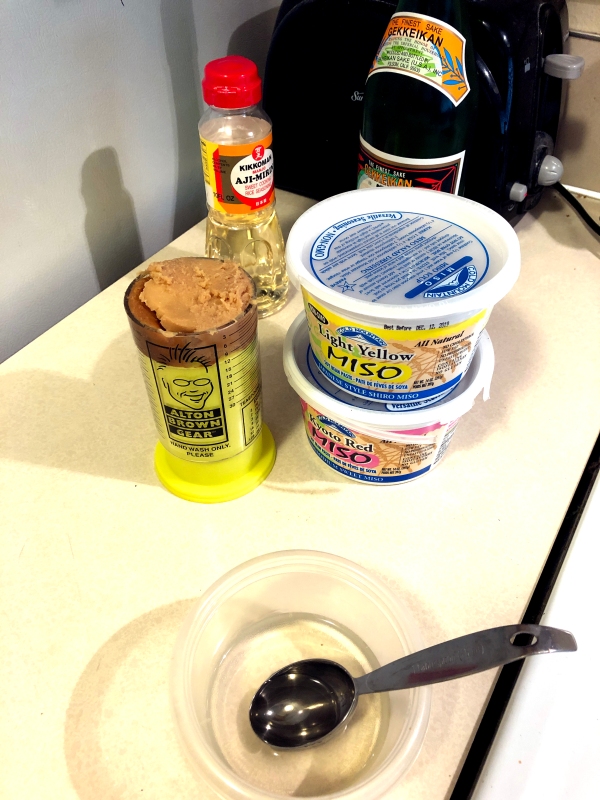 I was trying to work from ingredients I had on hand, so I went with a basic miso tare using this recipe as a guide.  If you look really closely, you can see that I used a blend of darker and lighter miso.  (About 1 tbsp of dark, with enough light to make up 1/4 cup.)  I’ve found that a blend often makes for better miso soup, so I went with the same principle.  (I’ll have to make a post on miso soup one of these days too…)  The miso was muddled with 2 tbsp each of sake and mirin.

You might ask…  Why didn’t I use any of my homemade miso?  Because it’s chunky and a pain in the butt to get to dissolve.  I could have pushed it through a fine mesh strainer to make it easier, but I didn’t feel like messing with it. 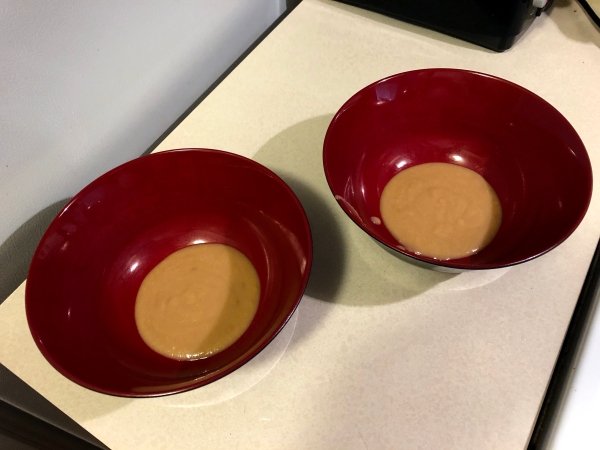 While the stock and the water for cooking the noodles was heating, the tare was divided between two serving bowls.  Yes, I have actual ramen bowls (from a restaurant supply place)  and I even eat my cheap instant ramen from them.

As an aside, learning to eat ramen Japanese style (with chopsticks) has been… interesting.  Still not entirely used to it. 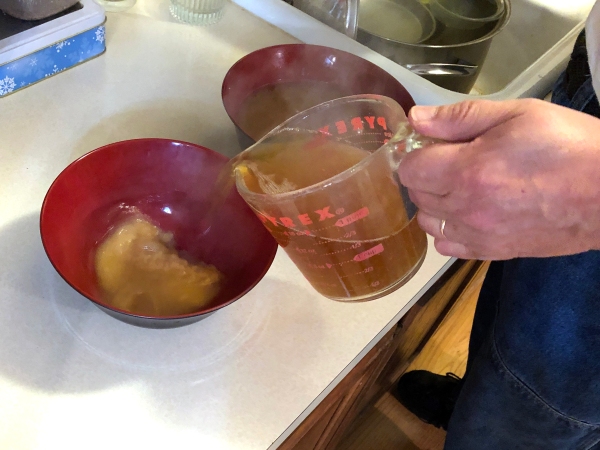 Right before the noodles were done, I added 2 cups (500ml) of the stock to each serving bowl. 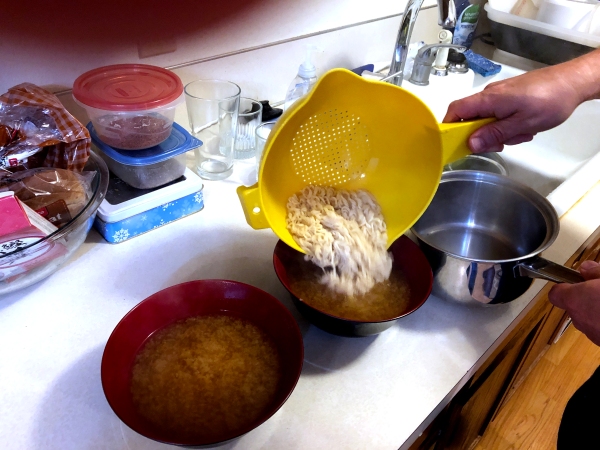 The cooked noodles were added to the bowl and…

Voila!  A finished bowl of very basic, not entirely authentic, ramen.  If you look in the upper right corner, there’s a bit of chicken teriyaki from our favorite local teriyaki joint left over from dinner the night before.

Though neither of us could finish the soup, it was very, very tasty indeed!  I’ll certainly be digging more into this pseudo-authentic style once the weather cools off…

However…  mistakes were made and lessons were learned, and I should own up to them

– It turn out to have near as much miso flavor as I’d hoped.  The next time, I’ll increase the proportion of darker miso (and use some of my home made).

– One of the reasons we couldn’t finish the soup was because it was so rich and filling.  I considered cutting it by a quarter or a third with dashi, but decided to keep things simple(r) this time around.  That’s a basic lesson in learning to cook, only mess with one variable at a time.

– The other reason we couldn’t finish the soup was because of a mental error on my part.  I made as much soup (2 cups, 500ml, per serving) as water called for in the package directions…  But forgot that some of that water gets absorbed into the noodles and some boils away.  If I didn’t cut the stock, I should have reduced the serving size to a cup and a half (400ml).

Not that the unfinished soup went to waste!  My wife heated it up the next day and had another bowl of ramen.

P.S.  Anime content should resume later this week now that the madness of County Fair week is over…  Speaking of the county fair, anime showed up even there!  Working the county fair (I work the photo contest), saw two people in anime gear – one girl in a Ochako Uraraka t-shirt, one girl wearing a U.A. tracksuit top.  There was also one guy who entered the contest whose photo titles came from Bebop episodes…

6 thoughts on “A beginner bowl of Ramen”