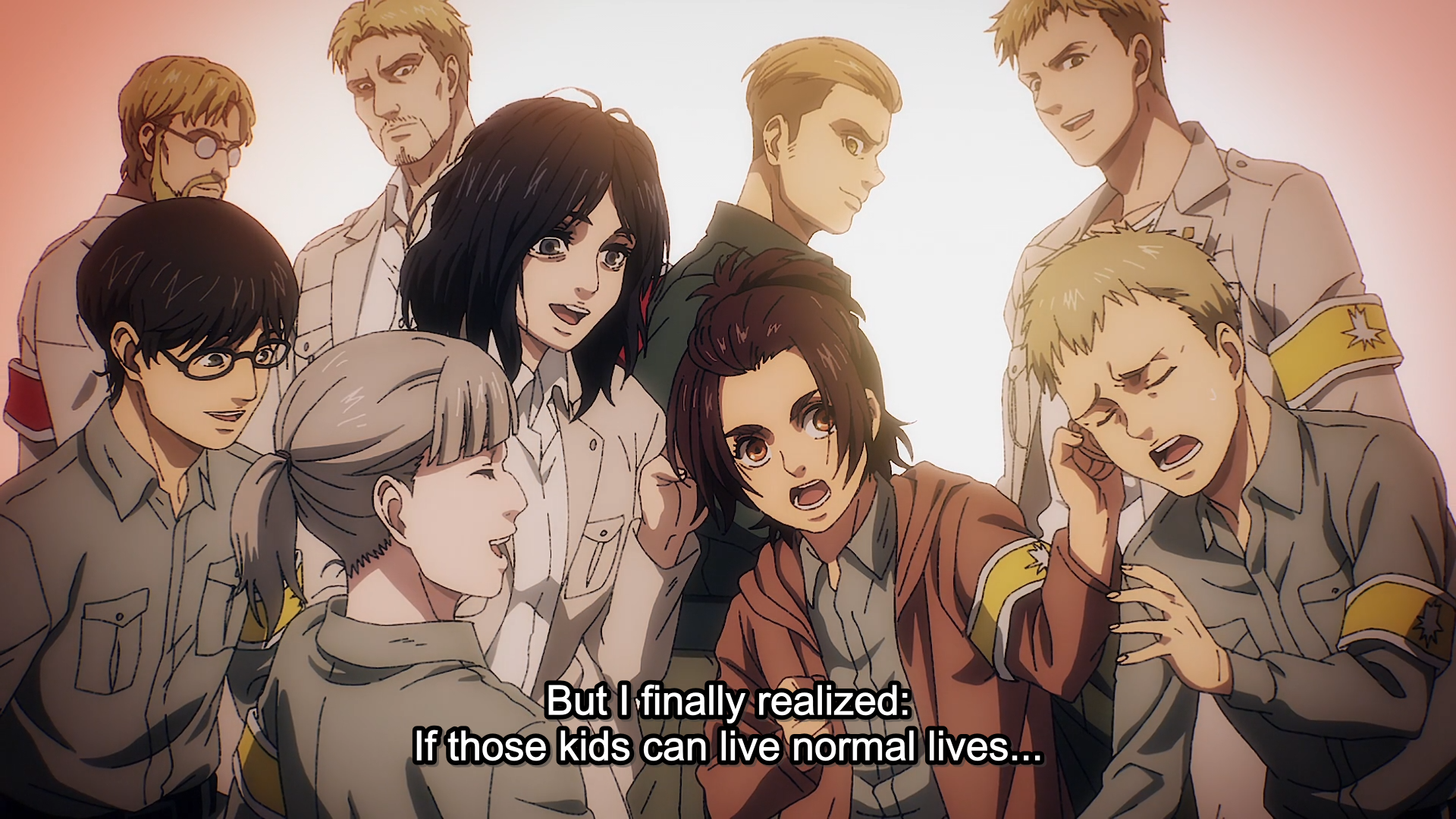 If I had a “Drama Queen Of The Week” award, it would definitely go to Titan this week…  Is that a good thing or a bad thing?  I dunno.  Either way, hit the jump and see what else I have to say this week!

The shows that I’m watching are in bold, shows my wife and I are watching together are in bold italics,  marks dropped shows and (*) marks shows that are watched but not regularly reviewed.

Man, Akebi is going to be busy on the day of the athletic festival.  Swimming, on the cheer squad, and now it seems she’s on the volleyball team and preparing a dance routine for the closing ceremonies.

Even if the episode was somewhat paint-by-numbers, I still enjoyed it.  Akebi and Akebi herself are just fun to watch…  And it was nice to have an episode that focused more on the titular character than the friend-of-the-week.  OTOH, would this episode have worked so well without all those (somewhat repetitive) previous ones?  There was some sneaky plot/character development going on there…

Like last week, quite a bit of slow walking to reach the desired ending point/cliffhanger.  And a very confusing bit about how it’s somehow faster to sail someplace else (outrunning the Rumbling in the process) to get the flying boat ready to go seek Eren.  I get the sinking feeling the author didn’t really “do the math”.  I hate it when they don’t do the math. /logisticsnerd

So, yeah.  As we get down to the finale, the wheels are falling off.

And what did that Thunder Spear hit?  That was blood, not water.  But all the Titan shifters are accounted for…

Doing some peeking at the AoT wiki, it appears there’s a LOT left out about Kieth Shadis that might have shed some light on his decisions and actions.  (I didn’t read it too closely.)

And Magath…  Hand Salute!  “His actions were in accord with the highest traditions of the Service”…  (A pair of obscure Navy references, but I’m going to let them stand anyhow.  I think they’re clear enough.)  Sacrificing oneself is an old literary trope, but it was executed about as well as I’ve ever seen.

Sooo…  What to say here?  Turns out that Tomoe is Lupin’s mother, even if it’s unclear if the relationship is adoptive or biological.  (Or at least the show wants us to think – I am not familiar enough with canon to evaluate plausibility.)  But that fact has been hidden from him by some form of post-hypnotic compulsion…  The entirety of the back half of this season, all the varied women Lupin has encountered, are part of complex plot by Tomoe to undo that compulsion.

I dunno.  I’m just here for the ride.

It was interesting though – during the dream sequences with Tomoe, you could see Jigen’s hat and Goemon’s scabbard in the background.  There’s more going on here than meets the eye, and I’m not convinced Lupin was ever hypnotized (during this episode).  I think he’s playing along…

But I don’t think I’m off base in saying it was handled surprisingly well.

Slow Loop is closing out the season with a Yuru Camp-esque camping trip.

The episode does highlight how Hiyori has opened up, and Koharu has calmed down and grown up…  But pretty much every female character who ever got a spoken line has accompanied them on the trip.  I guess it’s charming enough, the show has never really strayed from that.  But the core duo (or trio depending on how you count Koi) are a bit lost in the crowd.

Note:  The Attack on Titan finale is delayed a week, so the Week 12/Finale post will be similarly delayed.  But I will get my Spring anticipation post out next week in it’s stead.

And speaking of Spring:  Finally, some decent weather here…  actually able to have the windows open for a bit during the warmest part of the day.  Overall still cool, but Spring is definitely in the air.

If you’ve been following the saga of the chair…  The proper sized one finally arrived and got set up over the weekend!

But it doesn’t fit under my old desk…  So, now we’re trying to figure out how to swap out desks and re-arrange the electronics wall.

Anyhow, enough from me – what’s up with y’all?  Anything fun going on with you?  Your thoughts on this week’s shows?