Explosions and politics and foreshadowing, oh my!

There’s a lot going on this week, so let’s hit the jump and break it down!

Scott picked a good format this week to break down some of the details, so I’m going to “borrow” it for my own post.  (His post is linked at the bottom of this post.)  I’ll take inspiration wherever I can get it, especially since this is my third post this week!

Captain Okita appears to ill…  they’ve hinted that his health might not be the best, but in this episode they confirm it.

Later in the episode he collapses on the bridge.  And he and the doctor pass it off (in public) as a minor thing, “old wounds” “some fatigue”.  But the doctor whispers the truth… 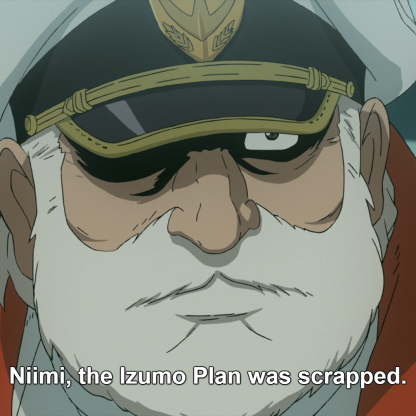 They’ve referred to the Izumo Plan before, but this is the first time we get the details.  It seems the plan was to run away from Earth and hopefully hide from the Gamilas.  But given the Imperial ambitions and plans for conquest revealed in the discussion with Dessler… such a plan is doomed to failure.  (Though Yamato‘s crew cannot know that.)  Intelligence Officer Niimi seems to think it’s a good idea to keep the Plan alive as a backup – but the Captain denies her request.  They simply don’t have time for side trips.

And what’s going on here?  First Yuuki is mistaken for being an alien, now she’s shown as having an alien device.  (The same holo display that Schultz has…)  And she has no memories beyond the past year.

In the first part of the episode, they spend some time giving further details on Gamilas society…  It appears to be a very bureaucratic dictatorship/empire.  The empire is a celebrating its 1000th anniversary, and the 103rd year of Dessler’s reign.

Just in case you’re wondering…  I have subtitles turned off when I take screenshots.  So why are there Japanese subtitles?  Because during the speech, Dessler is speaking Gamilas!  For more about the Gamilas language system, check out this page.

Does she look familiar?  She should…

Commander Shultz’s daughter…  Which makes his fate at the end of the episode even more poignant and horrifying.  Though he loyally serves a dangerous and evil empire, he’s still a people.  Uchuu Senkan Yamato is so committed to character details, it takes time to expand and humanize an enemy that dies just a third of the way through the show. An interesting mural they show us, twice.  The planet on the lower left is almost certainly Gamilas.  And Dessler was previously shown looking out the window at a planet that looks suspiciously like the one on the right…

And the episode ends with the now traditional title card…