Well, on top of having a bit of writer’s block, last week was also my birthday…  and I wasn’t going to push myself and struggle to get something out on my birthday.  And then of course, the writer’s block persisted into this week.

So, this entry covers two weeks and is once again in the “grumpy old man goes for speed” mode…  Sumimasen!

So, hit the jump and let’s run down the past two weeks and my mid-season thoughts on each shows.  Any guesses as to which ones get dropped?
The shows that I am watching are in bold, shows my wife and I are watching together are in bold italics, and  marks dropped shows.

I’ll be honest, I have no idea what happened in these two episodes beyond various groups in Academy City’s underworld maneuvering in their endless plots against each other…  It’s got something to do with Aleister Crowley (the City’s head honcho and chief puppet master) but that’s about all I got. 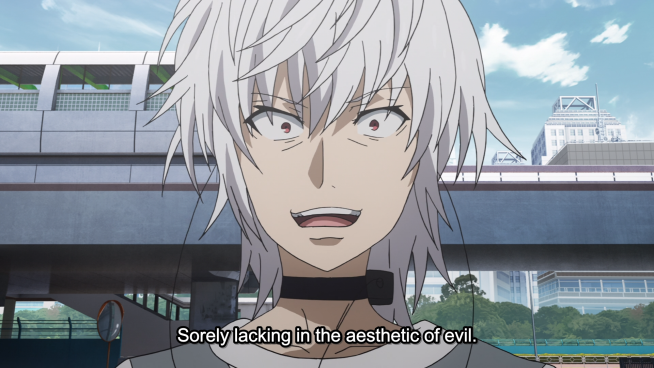 But we finally saw Accelerator is bad_ss mode, and that’s good enough for me.

Midseason thoughts:  Keeper, mostly out of habit, and it’s not a bad way to waste a half hours.  If you think that’s damming with faint praise, you’re not far wrong.

The Cheer Association is turning out to be more like Yuuki Yuuna‘s Hero Club – they’ll help and support anyone that needs it, however they can even if it doesn’t involve cheers and pom-poms.  This is a welcome development because it gives the story more to work with than just being cheerleaders on somebody else’s sideline.

Overall, Anima Yell! is staying well within its comfort zone.  In anything but CGDCT, that might be a flaw – but here consistency and comfort is a solid plus.

I’m not sure what to think about the “live for my sister” line…  It just seems too pat, too easy.  Somehow it doesn’t fit what we know of Nanami’s personality.

The sequence on the stepping-stones was beautifully done…  If I picked a “scene of the week” – this would be the one this week.  Using the stepping stones and their footsteps to express the distance and closeness and progression – just beautiful.

The ending of Tomoe’s arc…  Would it be too much to say that it’s the best (ending) or at least the most emotional so far?  It’s interesting that even though she was rejected by Sakuta, she still had the consideration to return to the full beginning – giving him his moment with Mai.

As far as Futaba’s arc goes, I think I’m going to withhold comment…  Ok, to be more honest I don’t know quite what to say.  Her arc is a bit more complex than Mai or Tomoe’s in that there’s two individuals involved.  (Plus the presence of Shoko has to mean something.)

And now – something I’ve got to get off my chest:  This is not a harem show.  Yes, there’s one guy and a bunch of girls who have feelings for him…  But it’s missing the second key element, he’s not leading them on, misleading them, or toying with their emotions.  Sakuta has made his choice and like Kirito, cleaves only to one.

So Hitomi can see colors again – and Yuito is a big part of why.  The latter is no surprise, it’s been plain since the first episode.  The former, now there’s the Big One.  You’d figure that would be the big reveal at the emotional climax of the series…

I expect that this exchange between Grandma-chan and Great Grandma-san holds the key to where they’re going.  Hitomi unknowingly used magic when she entered Yuito’s dream world – and that appears to have unleashed…  something.  I don’t know that I can quite put my finger on it.  The golden fish and reappearance of her colors seems to be tied back to that dream world.  Hang on folks, the story is in’t over yet and I think there’s something big coming down the pike.

Midseason status:  Solid keeper!  I’m very curious as to where they’re going to go with this.

After last week’s botched character driven episode, ep 5 was a welcome return to competency.  (Which appears to be about as high as they’re aiming.)  Had last weeks’s story been framed more like this, I would have liked it a great better.

On the balance though, I hope they taper off with the “Momo is insecure” shtick.  Two episodes have taken that plot line about as far as it can be stretched and there’s still five more characters that need screen time.  (I’m including Yuki in the count because so far we’ve really only seen her from Momo’s perspective.)

Ep 6 however…  was a complete train wreck.  They plainly meant for the viewer to have an emotional reaction, but the hackneyed plot line and wooden acting meant the whole thing fell flat.

Midseason thoughts:  If I had any sense, I’d drop this like the lukewarm leftover potato that it is.

The track meet was…  interesting.  Nobody expected them to pull it out and have everyone set the needed record, and they didn’t.  The production staff could have chosen to magic it up, but they chose not to.  Kudos to them!  One interesting point they kinda skimmed over – nobody quit.  Nobody.  King was visibly suffering, but he pushed through.  Though the officials tried to get him to quit, even Prince stuck it out to the end. Kakeru however got a very rude awakening.  He’s gotten used to lording it up over the other residents of Chikusei-so, and didn’t expect to be so soundly trounced.  He’s not what he thinks he is…  How will he handle it?

With Kirito and Eugeo off on their journey…  The focus shifts back to real world and a massive infodump as to What Is Really Going On.  There’s nothing tremendously unexpected or exciting so there’s not actually much to talk about.

Well, not quite…  It was nice to see Asuna, even if she is reduced mostly to being a plot device at least she showed some initiative.  It’s criminal how underused and misused her character is.

One thing that did catch my eye was Kayaba’s appearance at the end of Ep 6…  We’ve known he was a “ghost in the machine”, but now he’s appeared in the real world.  Very interesting…

Midseason thoughts:  It seems this slow start and infodumps are all faithfully adapted from the LN and it does get better.  So I’m gonna stick it out.

Another two-part “________ finds her inner strength and gains the ability to henshin into her Equalizer form“.  This time is was Chloe’s turn in the barrel, and she didn’t even get to fight…  Instead the other Equalizers fought while she piloted her goofy looking powered up form to insert a virus into a rogue AI.

Mid-season thoughts:  I’ll be keeping an eye on other people’s reviews, but for the moment this show is on hold for potential drop.

One thing in Ep 4 did catch my eye.  One of the students was talking about how archery is really a solo sport, and I don’t know that I agree in this case.  The actual shooting is very rhythmic and a shooter takes his timing cues from the shooter before him in the order.  So if a shooter isn’t on the rhythm, he can mess up everyone else’s head space.

Overall Tsurune is…  well, it is what it is.  So far it’s mostly a workmanlike school club drama and little else.  It’s not a dud, but it’s a long way from being KyoAni’s best work.

Midseason thoughts:  Mostly harmless and I’m only watching one other anime on Sunday, so keeper.

Well, quick and dirty but there it is…  What are your thoughts?

Also, with Thanksgiving next Thursday I’ll likely be taking a break and returning to my regularly scheduled post on the 29th.