This was… a hell of a week for several shows as they build toward their finales.  SAO unfortunately was not one such show….  Anyhow, hit the jump and let’s run down this week’s episodes – what worked and what didn’t?
The shows that I am watching are in bold, shows my wife and I are watching together are in bold italics, and  marks dropped shows.

I guess I got my timeline wrong last week…  They’re actually still at the training camp.  Fairly bog standard episode overall, culminating in their performance at the Summer Festival.   “Bog standard” isn’t always derisive – in a CGDCT show, it’s pretty much expected and appreciated.

This was…  basically a monster of an episode.  Where to even begin talking about it?

The bath scene was incredibly well done.   Toukou’s awkwardness, Sayaka trying so hard to play it cool that she came off cold…  But Yuu simply bulling through in a detached manner really sold it.  Serious kudos the staff for playing it straight and not giving in to the temptation to play to the male gaze.

This…  the triple monologue, is easily the most impressive scene of the entire episode, if not of the entire series.  Each of the girls, so hungry, so lonely, yet so afraid…  I was fascinated by Yuu in the darkness finally giving in and no longer fooling herself.

The reveal about Touko’s sister.  I’m going to wait and see how that plays out. 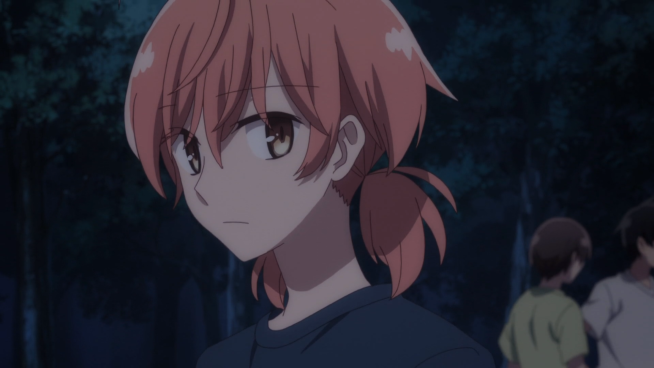 Yuu is not pleased though that Touko is confiding in Sayaka…  I don’t think she grasps how much things changed with her internal monologue the night before.

I…  don’t know that I was happy with this episode.  Kaede losing her memories, that made a kind of sense.  And I was quite pleased with how naturally her progression back into the real world was handled.

But the cliffhanger, the unheralded return of Kaede-san….  I don’t think I like that much, though given the show’s quality to date I’m willing to give them the benefit of the doubt.

Aaaannnd – WOW.  In a single episode, they’ve seriously upped the ante.  Grandma’s time spell is wearing off, but rather than returning to her own time Hitomi is in danger of simply vanishing into time. Led by Kohaku, the gang rallies around trying to gather the materials needed to cast a spell that will stabilize her and return her to her own time.

But tellingly, nobody asks Hitomi her opinion.  Though, TBH, it doesn’t appear she has much in the way of options – it appears her choices are limited to vanishing or returning.  Either way, she’s going to lose the world and the people she’s come to love. 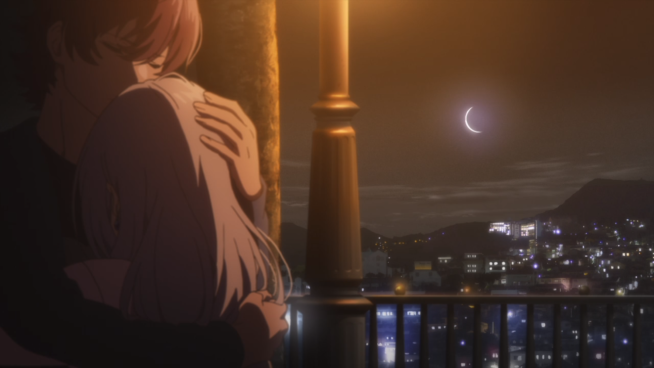 The cliffhanger was…  heartbreaking.  There’s not going to be a truly happy ending for this couple is there?  Will Yuito live long enough to meet Hitomi in the future?  Probably…  But in some ways, it feels like that would be cheaping out.

On hiatus until Jan 8, so no episode to review… I can’t be the only one wishing this would actually happen!  Not only would it (finally) kick the storyline into high gear – SAO is always 10,000 times better when Asuna flips on her bad ass switch.  Am I right or am I right?

Anyhow, another long slow episode…  Mostly dedicated to dialog and Kirito being over powered and decidedly too clever.  I’m perhaps being a bit judgmental on the second,  he’s pretty consistently characterized as being intelligent and resourceful.

And what was up with the lunch?  I mean, they emphasized the page giving it to him and they even showed it sitting on his bunk in the prison cell…  And then it was left behind.

Kind of an interstitial episode with the team preparing for the tournament…  Other than that, we get a long look into Seiya’s head, and it’s not a pretty place.  Seem’s he always been a bit of a loner and not a happy person.  We also saw that he came to kyudo more-or-less in Minato’s slipstream, which adds some weight to Shuu’s comment a couple of episodes back…  “You don’t love kyudo”.  No, he doesn’t.  He loves Minato.   And somehow, he’s tied up with Minato’s injury…  I expect that, given the cliffhanger, we’re finally going to get an explanation.

Sorry if this is a bit rushed…  Losing an entire day of work because of yesterday’s windstorm really threw me off my game.  And I can’t delay it any longer because of other stuff on my plate.  As well as the climatic episodes of Iroduku and Bloom  airing today might make much of what I wrote obsolete!

Speaking of other stuff on my plate – expect next week’s post to be delayed, probably until the following Monday.  I think that will make sure I catch all of the finale episodes without ending up with a half post after the New Year.

Anyhow, drop a comment and let’s chat about this week’s ep!  If I don’t chat with you before then, have a good Christmas!