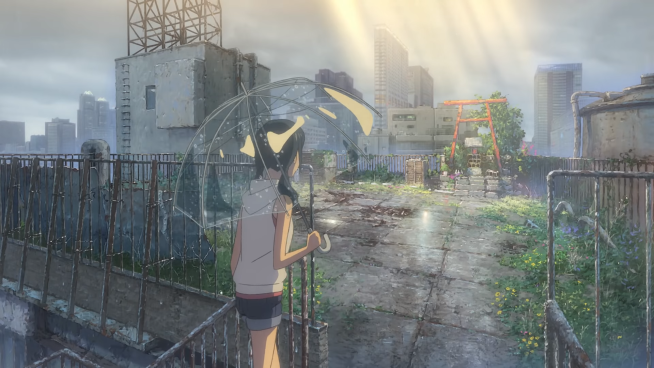 Makato Shinkai’s latest film hit the theaters last week, and many anime bloggers are posting their thoughts…  I’ve rounded up ones I’ve read and enjoyed and present them in this special edition of Worth Reading.  (Along with a fumbling mini-review and some of my own.)

I’ll put my mini-review and comments up here at the top, where you’ll hopefully scroll past while looking for the interesting stuff…

Honestly and simply, I enjoyed the film greatly.  My only real complaint is about some of the emotional beats.  Shinkai is excellent at the broader and larger beats, but sometimes he falls a little short on the smaller and more personal.  Not always, and not that far short, but noticeable to me.

Despite the success of Weathering at the ‘big picture’, I never really felt that he sold the connection between Hina and Hodaka all that well.  I doesn’t have to be as big and dramatic as the mountaintop scene in Your Name…  The smaller, less dramatic scenes as in Voices of a Distant Star and Garden of Words work just fine.  To me, the relationship between Keisuke and his daughter felt more fully fleshed out.

On the other hand I could argue that the incompleteness of the one-sided relationship is the whole point.  Hina doesn’t see in value in herself except to bring happiness to others and is willing to sacrifice herself to that end.  (Not just as the Sunshine Girl or the Weather Maiden, but in how she works to support herself and Nagi.)  It’s not until the very end of their shared journey that Hodaka shows her that he values her on her own.

I think maybe this takes more thinking…  I’m not always the worlds swiftest or fastest at figuring these things out.

Speaking of comparing with Your Name, a lot of people are doing that and it’s not entirely fair.  Maybe it’s because of my experience as a (sometimes) poet and photographer, but I’m not as uncomfortable with looking at works on their own.  While you can rate-and-rank subjectively, it’s practically impossible to do so objectively.  About the only thing you can do objectively is trace the evolution of an artist across his entire body of work.  By that standard, Weathering with You stands comfortably on the dais right alongside Your Name.  We have that rare privilege of seeing an artist at the top of his game as he works out the nuances of what he wants to say.  Or, as I like to say – “Shinkai is not the next Miyazaki.  He’s the next Shinkai.”

And at the end of this wandering path, my final thoughts are on the future…  After capturing lightning in bottle twice, what next?  The studios and the less critical in the audience are going to set a very high bar.  Despite what it may sound like above, I am something of Shinkai fan…  but after being in many fandoms over the decades, I’ve found one eternal truism – it’s rare for quality to trump commercialism.  They that have the gold make the rules, and one of the rules is “thou shalt generate ever increasing quantities of gold without increasing the risk”.  Can Shinkai continue to evolve as an artist within those constraints.  Will he be allowed to?  I certainly hope so.

All that being said, let’s dive into what’s being said elsewhere across the blogosphere…

The narrowness of Weathering with You, though, poses some interesting questions when the personal stories of the characters begin to contact the unavoidably broad element of the weather—a feature of the film that Shinkai and his producers have explicitly said was inspired by climate change.

One Human Sacrifice: Weathering with You’s Great Question
Iblessall – Mage in a Barrel.

I hadn’t originally intended to write much of a review/rumination on the movie, but Bless’ post started me thinking about how Shinkai handles narrow v. broad issues and relationships.  What I wrote above is basically the beginnings of a response to his post.

Adults for the most part are either indifferent to the struggles of our young teenage MC and heroine or actively predatory, attempting to exploit their good nature and ignorance.

Weathering with You
Anime Sunday.

Anime Sunday also touches on the themes of broad versus narrow…  And it’s interesting because they do something few reviewers do.  They personalize the review with their experiences of viewing the film as well as their thoughts on the film.  That’s something not enough of us do I think.  All too often we, as bloggers, put a certain distance between ourselves and the anime we’re watching.

Bring a Teen, or Your Inner Emo Teen, to Weathering With You
Dan Kois – Slate

This article has been popping up in my Google News feed for a week, and until this morning I’d steadfastly avoided reading it…  But when I did, I thought it made an interesting companion piece to Anime Sunday’s.  He never makes it quite clear why he thinks he’s not the target audience, but his observations of his companions are interesting.  (Otherwise, his review is pretty superficial.)

Thinking about it a bit more…  Hopefully he doesn’t think that “animation isn’t for adults”.  The single biggest thing preventing America from having an animation revolution is the dogged and persistent belief that animation is for kids and fart jokes.  Hopefully Weathering‘s box office success will start to change that view.

According to Shinkai, Weathering With You tackles the issue of social responsibility. How much do a single human’s actions matter in the scheme of things, and are we obligated to save the world from something much larger than ourselves? At first glance, this seems like a natural fit for a story about climate change.

And now a bit of thematic whiplash as I shift gears…  When it comes to critical discussions of Weathering With You, there are three themes that keep popping up.  The first, is the matter of broad v. narrow.  The second, the nature of self sacrifice.  The third, ably articulated by Frog-kun, is the allegory about anthropogenic climate change.

Froggie’s article is worth reading because they doesn’t simply accept and celebrate that allegory as a given.  They actually evaluate the film’s success in conveying and executing that allegory.  The title of the article is a bit of a spoiler about their position, but don’t let that dissuade you.  Click through and read it.

Frog-kun also wrote ANN’s review of the movie, worth checking out as well.

To me, I really like how the story is put together like a fairy tale stay in Tokyo with the reality of the situation slowly pulling into the situation as time goes.

Weathering With You: Tokyo Streets and a Sunshine Girl
Scott – Mechanical Anime Reviews

Last but by no means least – Scott writes a closer, more personal, review of what he does and doesn’t like about the film…  He covers some of the smaller aspects of the film not covered by the reviewers discussing the bigger issues and themes.  There’s all sorts of perspectives on any piece of media, and you shouldn’t miss the forest for the trees.

And there you have it!  A collection of thoughts on Weathering With You.  Feel free to comment here or on the linked post.  If you enjoy a post, be sure and let the original author know!

A note for my regular readers:  Producing this special issue of Worth Reading has taken a goodly chunk of the time and energy I’d normally devote to my weekly review post.  So, I’m going to roll that forward into a two-week set of reviews next week.  Look forward to it!

10 thoughts on “Weathering with You – a Worth Reading special edition.”