Anime opening sequences serve the same purpose as the introductory blurb you’re reading here…  They get butts in seats, hopefully inform the viewer about the show, and get them interested in watching.  (In some ways, they’re a mini-PV.)  I also talk a little bit about some of the imagery and techniques used in creating opening sequences and how they’re used this season.

So, hit the jump and let’s take a look at the OPs for the shows I watched this season.

A quick note, these reviews are in no way objective. Openings are meant to address the viewer on an emotional level, and I’ve taken them subjectively.

A very catchy/bouncy pop tune, paired with a fairly generic OP sequence.  Like many OPs, it pops quickly through the main characters and settings of the show and gives some hints to their relationships.  On the upside, no significant plot spoilers.  On the downside, it’s a bit confusing because there’s many characters featured in the OP who play only minor roles in the show itself.   Konbini is part of a large multi-media franchise and the production staff no doubt anticipates that viewer is familiar with the franchise, the characters, and their relationships and history.

I watch it all the way through every other or every third week just because I like the tune. 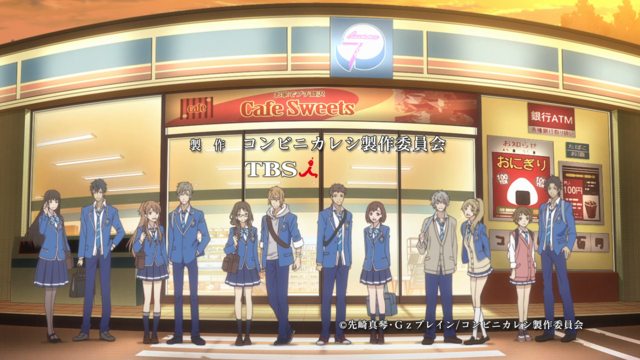 End card – all the cast lined up at one of the show’s iconic locations.  Pretty much bog standard.

A serviceable OP, giving a quick overview of the main characters and some hints about the show accompanied by a fairly simple pop tune.  I sometimes watch it through.

There are a couple of parts in the OP worth bringing attention to though: 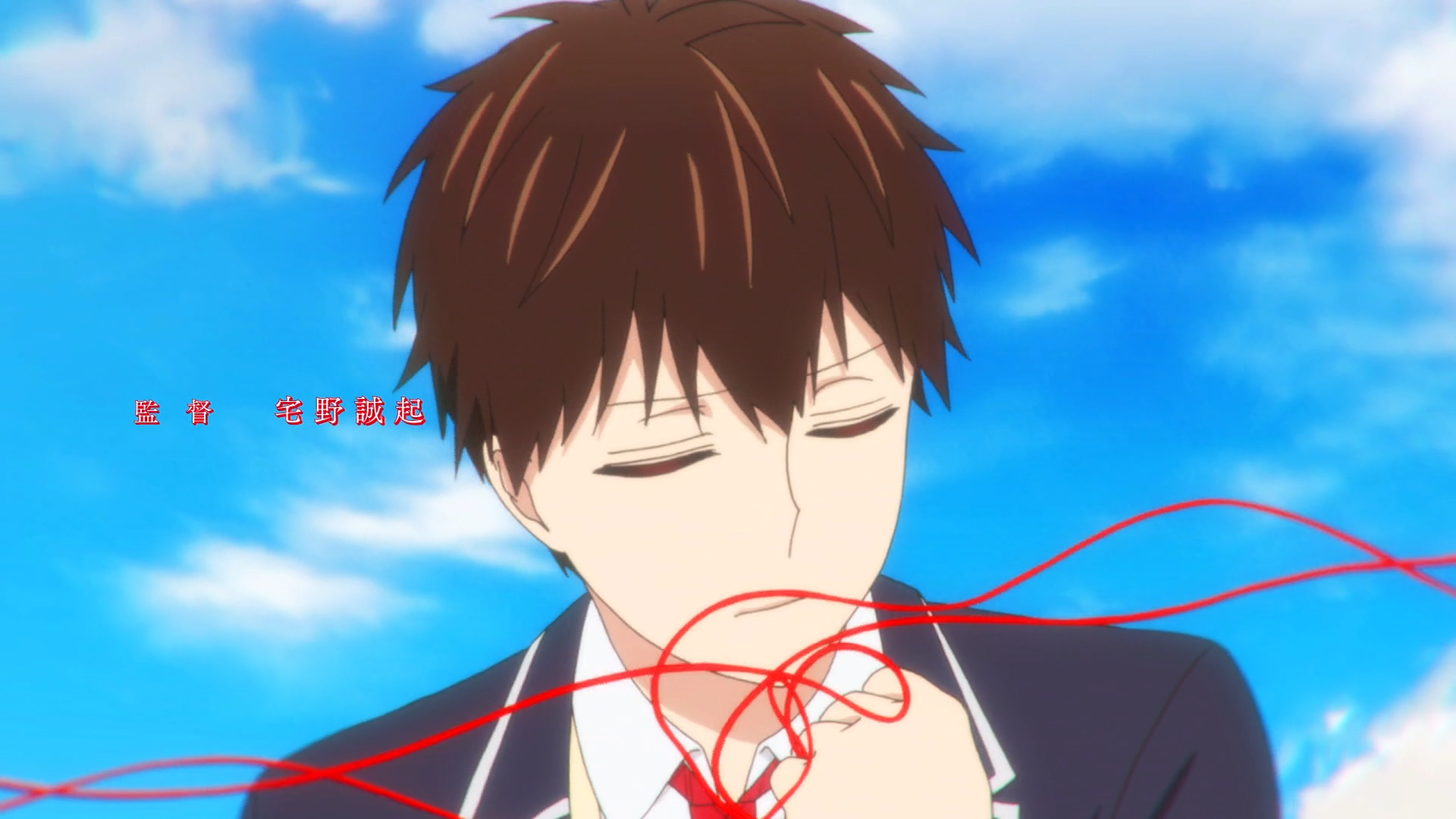 One recurring image in the OP is Yukari (the male lead) tangled up in a red string.  In Asia, this is a powerful symbol of an eternal and fated connection between individuals.  (More info at Wikipedia.)  This connection and it’s ramifications are one of the central themes of the show. 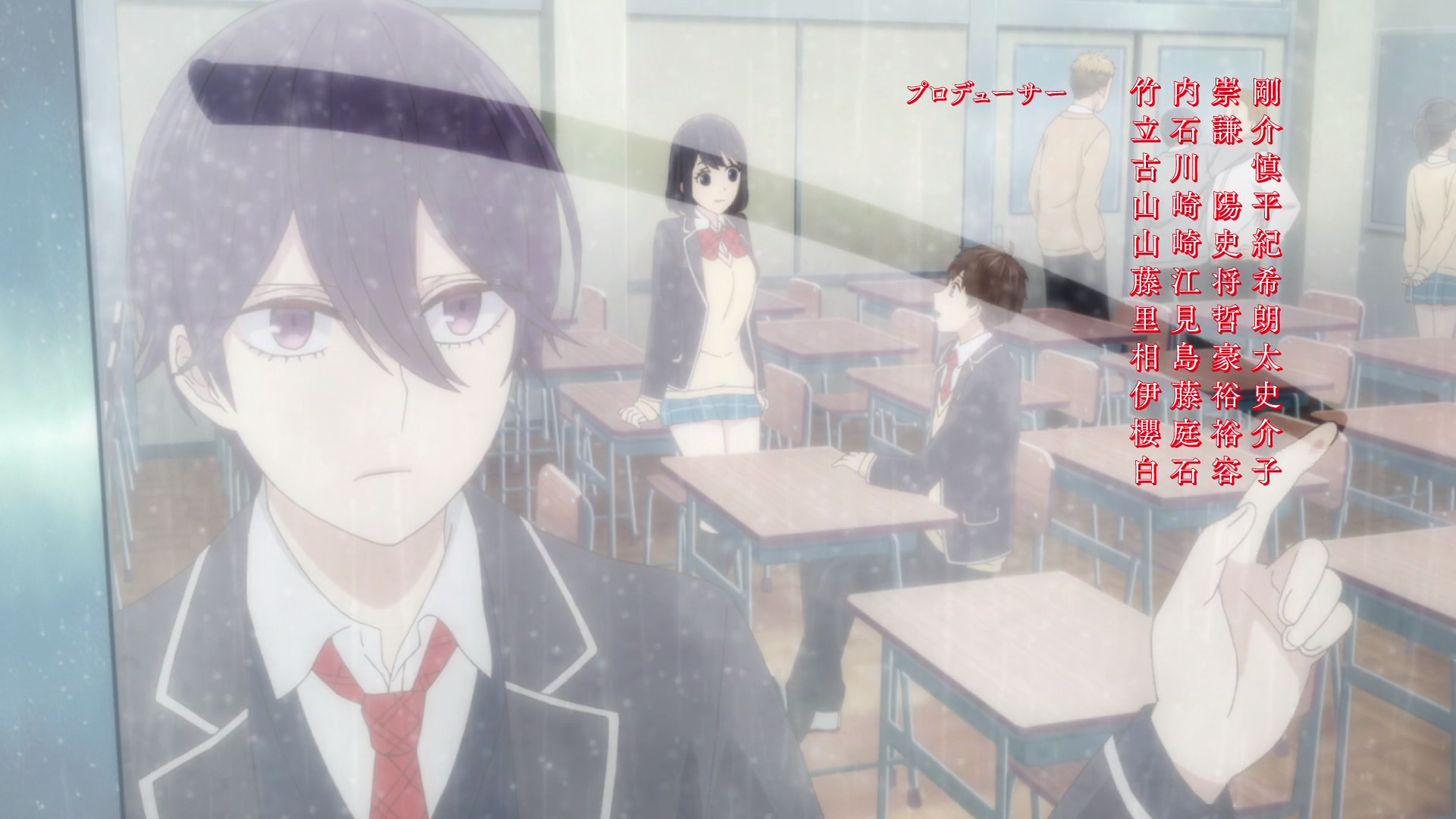 I’m not going to give spoilers…  But this image illustrates an interesting (and often misused) technique, foreshadowing the series in the OP.  Mysterious and odd – until a few episodes in, when it becomes pregnant with meaning.

This shot illustrates a related technique…  Like the one above, semi-mysterious until a certain episode airs  and then it acquires it full meaning.  The difference is that this shot (and the short sequence it’s taken from) come directly from a scene in the show rather than being unique to the OP.

Done correctly, these are powerful.  Done wrong, they can be spoilers for the plot or Big Reveals/Big Events in the show.

On one hand this is a fairly straightforward OP, showing the main characters and a bit of their adventures.  On the other, it echoes one of the main themes of the show – Riko and Reg’s discovery of each other and their ensuing deep partnership.  The lyrics bounce between grim and hopeful, also echoing the tone of the series.

Simple and straightforward, used correctly, can be powerful.

This OP is sung by the VA’s for the main characters, Tomita Miyu and Ise Mariya voice Riko and Reg respectively.   This is pretty common for idol anime, unusual otherwise. 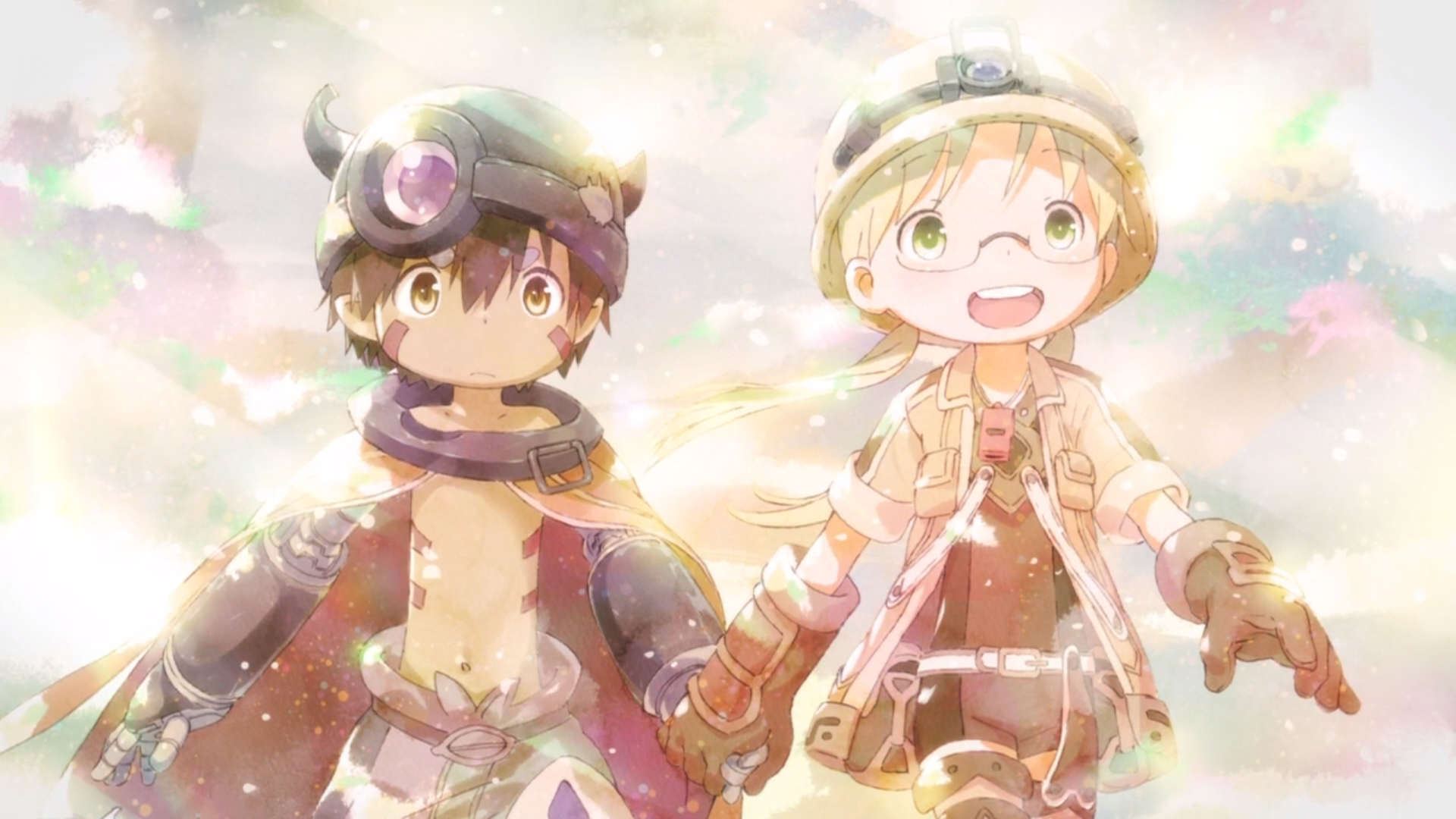 The OP’s end card has been related to the events of that episode.  Since Riko and Reg have ventured into the Abyss, it’s been locked to this one…  with a determined Reg and an excited Riko as they stride forward hand-in-hand.  As with the rest of the OP, a perfect fit for the show.

We usually watch it all the way through.

Sora ni Utaeba (If I Sing in the Sky) amazarashi (Lyrics)

About as forgettable an OP as I’ve ever seen…  On the other hand, it’s full of action and emotion and does a workmanlike job of showcasing the characters , focusing the viewer’s attention, and getting them pumped for the upcoming show.

The Other Side of the Wall  Void_Chords feat. MARU (Lyrics)

I have to say, this is flat-out my favorite OP of the season.  It’s been awarded that rare honor – it’s the only OP I watch through every time.  (Or maybe not so rare, as there’s almost always at least one a season.)

Anyhow, I love it to pieces.  The tune has a nice catchy beat and the animation has some nice action bits and showcases all the main characters without spoiling the plot.

The end of the OP is especially interesting.  The Princess’s world (a steampunk jungle) turns upside down and is shattered.  The scene shift to the rest of girls…  coming to her rescue?  As the car falls, the others stay with it while Ange takes off like a shot.  The Princess visibly relaxes was she sees Ange -and momentarily sees her as a Black Lizard.  Then when Ange grasps her (using her Cavorite device, so they’re no longer falling), they spin around and Ange levels her weapon at…  The viewer?  But behind the viewer is the rest of the team…

It’s not technically a spoiler (which openings sometimes are), but I think the staff is telling us about their relationship and potentially future events.   But why does the Princess see Ange as the Black Lizard?  That’s a question I haven’t been able to answer.

If I had to describe this OP in one word…  I’d be stuck choosing between “bland” and “forgettable”.  It’s not bad per se, it’s just kinda… there.  The animation consists mostly of context-free clips of the main cast in action.  The song is a bouncy but forgettable ballad.

In discussing Abyss‘s OP, I spoke of how powerful simple and straightforward can be.  Sakura‘s OP occupies the other end of the spectrum, just a step or two above being basically phoned in. 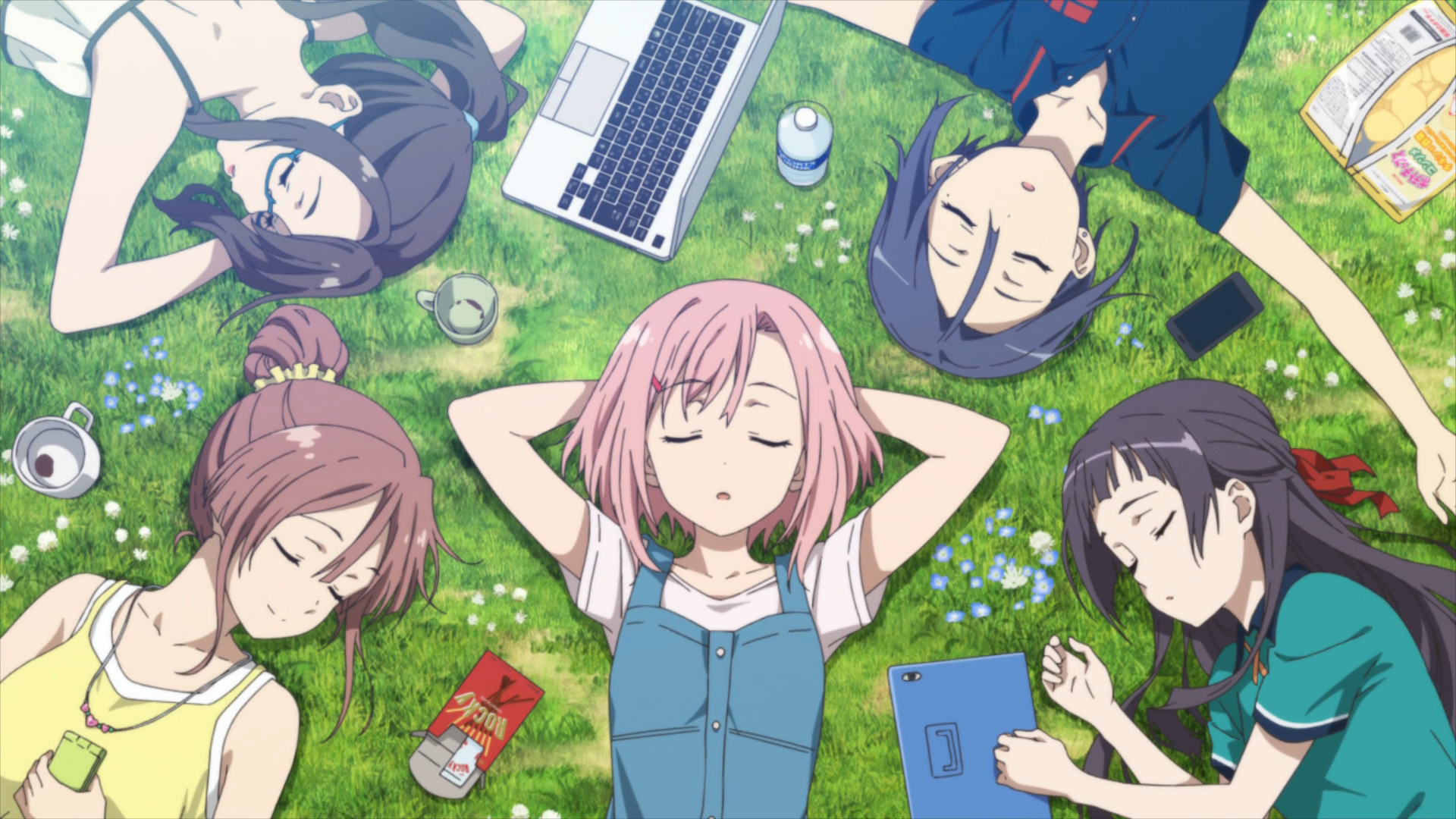 The OP sequence ends on something of a trope, the main cast all asleep in the grass.

(I couldn’t find a video of the actual OP, so one of the full song will have to stand in.)

I couldn’t find a video of this OP, but in some ways you aren’t missing much.  The majority is pretty generic…  a mix of static shots and short clips of the main characters in action.  I’ve watched it a couple of times, but usually fast forward through it. 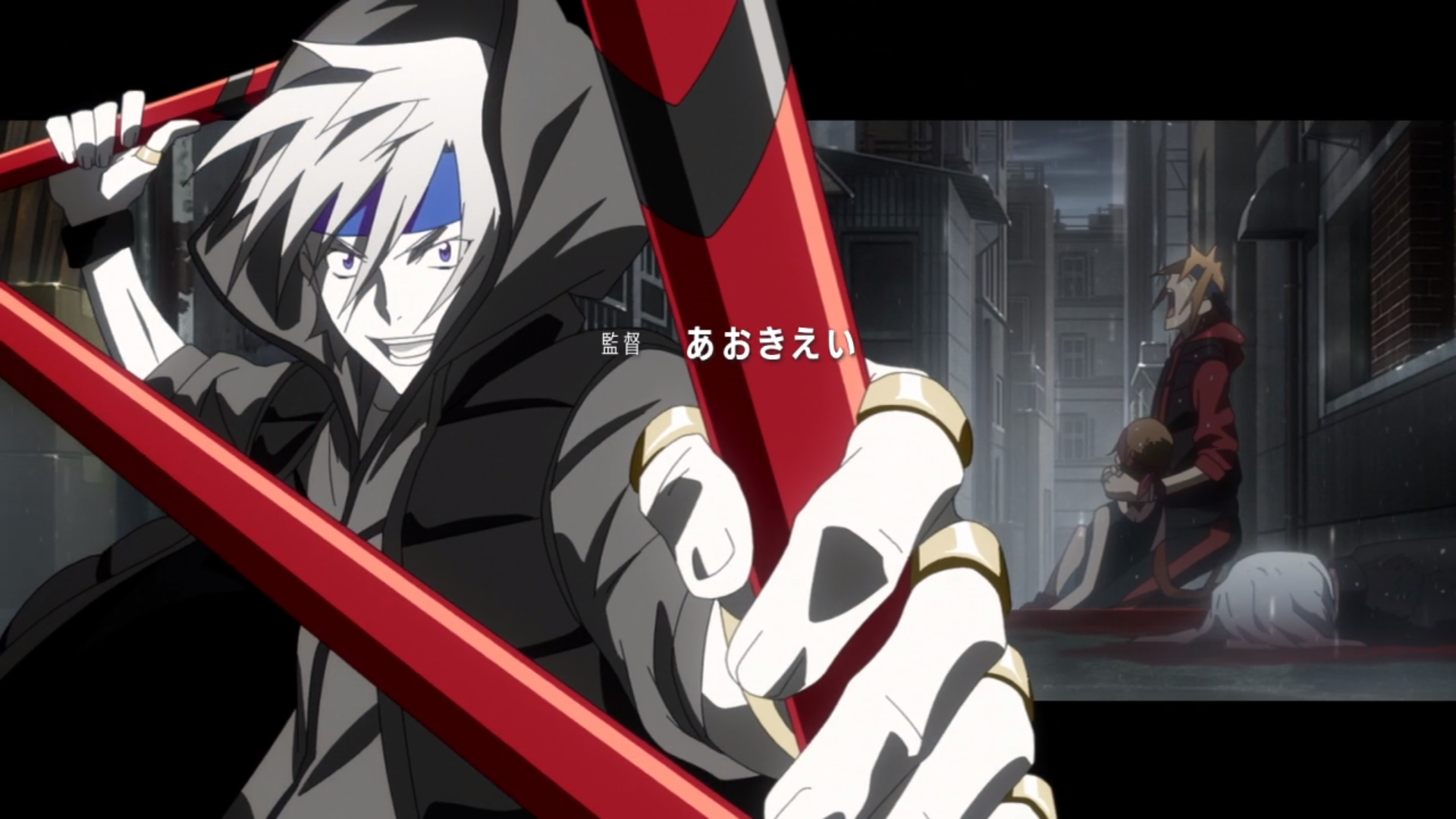 The character posing in the foreground with a related image in the background…  How many times have we seen this?  Way too many times.

Still, I have to give credit where credit is due…  There are three nice sequences among the drek.  The OP starts with an arresting sequence of Altair’s hand reaching out and crushing a beating human heart.  Near the middle, Altair and Shimazaki appear together… and after Shimazaki vanishes, Altair reaches out for her with a look of pain on her face.  At the end of the OP, Altair is walking across a sea of cracked and dried mud.  Coming across a pond with a single white water-lily (a symbol of resurrection and enlightenment) floating in it, she stoops and picks up the blossom.

Some powerful symbolism in those three sequences.

Clocking in at just a minute the shortest OP on my list.  But fast intros are par for the course for short form anime.  It does a creditable job of giving us a quick overview of the characters and some insight into their personalities and relationships.

It’s not a bad OP, sometimes we watch it.

Minase Inori performs the song and also voices a character in the series as well as voicing Meteora Österreich in Re:Creators.

And there you have it!  What were your favorite (or not) OP’s this season?  What cool techniques have you seen used this season?  Drop a line in the comments and let us know.

12 thoughts on “Let’s get ready to start! Some Summer 2017 openings considered and reviewed.”