Well, though it’s been fun, a crazy busy holiday schedule has left me even further behind than usual.  Still, I hit the high spots this week… 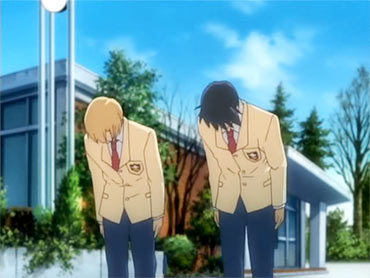 Let’s hit the jump and see how this week went!

Finally – an episode that invokes a sense of wonder, painfully absent since Nevin’s death dream back in episode 3.  Echoes song was incredible…  and the water mirror scene very well done.  But what does the empty fireplace at the end mean?

If Gataris hadn’t been jumping around like an epileptic hamster on crack since practically the first episode…  I’d say they’d finally jumped the shark.  Instead, all I can say is “what next??”

While Blend-S has scored it highest points as a workplace comedy…  It’s at least theoretically and in part a romantic comedy.  This week emphasized the “theoretical” part, as in “theoretically it was meant to be comedic, but it wasn’t actually funny”.
Girls Last Tour (ANN)

So far, SideM has stuck pretty closely to the iDolM@ster formula and the genre staples – except for two items.  One, there’s been no drama leading up to the final concert.  Two, none of the idols have tried to get off the bus…  And this week, the missing items were finally found:  Sakuraba (of Dramatic Stars) has been doing solo work on the side.  When Producer-san turns down a high profile role to preserve Sakuraba’s health and energy for the big concert…  He blows up and walks out.  I should’ve guessed he’d be the one, he’s been a bit of a pill all season.  OTOH, his appetite for work and image is a relatively new thing.  Two more eps, I’m guessing one to solve the drama and one for Big Finale.

What a grand and glorious cock-up Valentine’s Day turned out to be!  Though Mio is now painfully aware (and certain) of her feelings for Eita, she still shys away from positively acting on them.  (Though on the sly, she’s still prepping for the entrance exam for his college.)  In the end, it was Ena who was the only girl who gave chocolate to Eita even if it was kinda off-handedly.  (She’s also the only one that’s even quasi confessed.)  She’s got this whole passive-aggressive “I’m backing off but not giving up!” thing going on.   Eita on the other hand is either dense or just ignoring the whole affair while he focuses on Mio.

It was also nice to see the Haruto/Hazuki pairing get at least some measure of closure.  It was also interesting to see how aware Hazuki was of the distance between them – not emotional or physical, but in their futures.  Haruto has his feet on the ground, but she still faces a more uncertain road.

Though it finally gave us a clear picture of the position and role of Konohatei in their cosmology, the first story was kinda forgettable.  The second story, Okikiku’s encounter with a doll who (unlike her)  was well loved…  I’d felt kinda sorry for her before, but watching her break down as she realized what she’d missed in her “life” was really touching.  In the end, I actually felt sorry for her.  Yeah, that (toy) story has been told before, but that doesn’t mean I can’t appreciate a well done reimagining.

Land of the Lustrous, ep 11

I have to say. I’m pretty much disappointed by this episode.  After the tension of last episode, we get…  fluffy pomelunarians?

The Good Content: Cinnabar trying to act all cool and aloof while getting yipped at by a pomelunarian pic.twitter.com/puJhLKldbG

Not to mention, I’d have expected some kind of fallout from Phos’ awakening to Sensei’s secretive nature.  Instead, everyone seems to take it in stride and we get a jump to a different story.  It seems Lustrous is headed toward a “go forth and read the manga” ending…  Now those aren’t universally bad. Earlier this year Made in Abyss ended at a natural breakpoint.  On the other hand, we also have the recent Masamune-Kun, which abruptly stopped mid-arc.  Lustrous seems headed for the same rocky shoreline.

The Uranohoshi students decide to have a School Closing Festival – and the result was a long loving farewell to the school and one of the best character driven episodes of both seasons.  It was particularly nice that the song performance was in-world, a pitch perfect cap to the episode.  The final few moments, a montage of the bonfire burning out and becoming ash, was a perfect symbolic choice.

I have to say, I loved this special ep.  Other than the unneeded brush with the “accidental pervert” trope in the first story, they were both cute as hell.

Something of a filler ep…  Marking time while they rush toward the concert and the finale.  On the other hand, it was nice to see them carry through the theme of new beginnings… both with WUG headed out for guerilla concerts (back to their roots), and with Run Girls Run being invited to stand in during practice for missing WUG members (making their start).

G*damm…  they just keep ratcheting up the tension.  I have to wonder how tightly plotted the overall universe is, because the explanation of Yuna’s condition is either the best foreshadowing ever – or the hugest piece of BS ever.  I’m also starting to get very suspicious of Sonoko…  This is the second time she’s bullied information out of the Taisha.  Deus ex machina or foreshadowing of…  what?

Between one thing and another, got a little behind this week.  Tomorrow is busy, and the Yamato post has to go up on Fri, so things got cut a little short.

As far as next week goes…  I don’t know how the schedule is going to go.  I have a special post for Wednesday, and we’re starting into the finales today.  I usually want to take a little extra time there.   The Yamato posts will go up as scheduled.

So, there you have it!  What did you think of this week’s shows?