Episode 20 – Under a Rainbow Sun This was… one hell of an episode.  One hand, it was a spectacularly directed and animated space battle.  On the other, something much more….

Hit the jump to find out what that is!

As I said, on its face, Ep 20 was spectacular and dramatic space battle…  Full of twists and turns of accident and fate.  But at its heart it was a confrontation between two men.  Both supremely able commanders, loyal to their men and their cause.  Both determined to win this battle.  But only one can survive.

Who are these me?  On hand, General Elk Domel of the Gamilas empire.

Proud and confident of his abilities, yet not (at first) willing to take anything for granted.  His mission is to destroy Yamato, and he will make certain that task is completed.

Captain Okita’s goal is subtly different – to survive rather than win.  Yamato must survive in order to reach Iskandar, retrieve the Cosmo DNA, and ultimately return to and save the Earth.  To do that, he and his crew must think rather than simply fight.  He also realizes that his opponents aren’t the ships of the enemy fleet, but their commander.

Captain Okita also has a different style…  General Domel relies on the power of his weapons and the overwhelming strength of the Empire.   But even without the powerful Wave Motion Cannon Captain Okita has an advantage – rather than a crew loyal to the Empire, he has a crew dedicated to a cause.  A powerful motivation indeed. 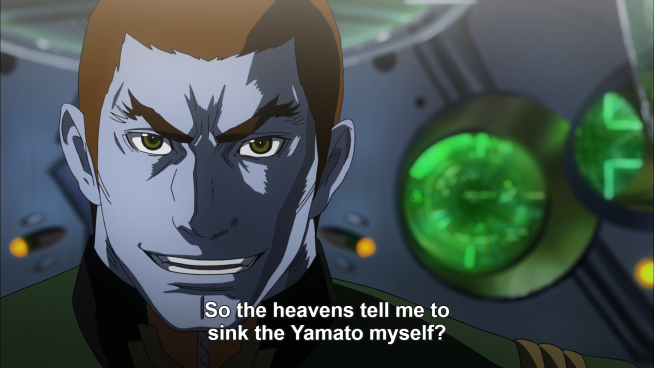 But Domel is not without weakness…  his pride and self confidence lead to his downfall. 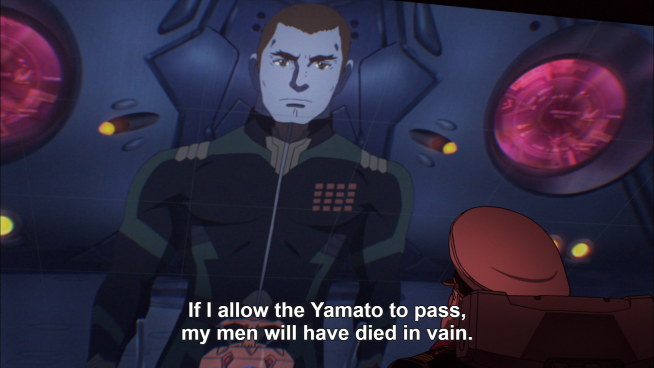 I have to admit a sneaking admiration for Domel.  At the penultimate moment of his life – he thinks not of the Empire, not of his loyalty or honor, but of his men.  It still amounts to the same thing, but to me the way of looking at it matters.

In the end, he chooses the path of a kamikaze in a final bid to defeat Yamato. At the moment of the explosion…  they chose to cut to Elisa Domel in prison.  I don’t know quite why, but this moment always catches my heart.  Maybe it’s the admiration mentioned above along with humanization of Domel in the last episode.

But the episode it not all about Okita and Domel…  There’s a lot going on elsewhere. As Toru is leading Yurisha/Yuria to safety, they encounter the Gamilas boarding party.  When he is shot, she reacts in horror to the cruelty and pain of war being forced directly on her.  I suspect Yuria’s feelings towards Toru drive this as much as Yurisha’s concern about violence does. And at this – Yurisha chooses (is forced?) to emerge from her coma and the prison of the Autonomous Navigation System and take a direct part in the proceedings. 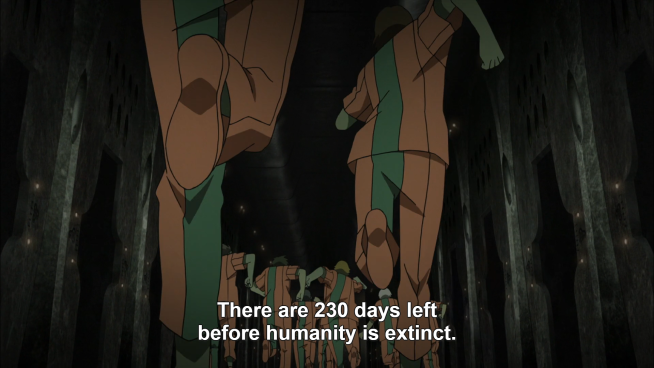 And the episode ends with it’s usual end card…  Reminding us that no matter individual tragedies may occur in the context of the story, a larger battle goes on. 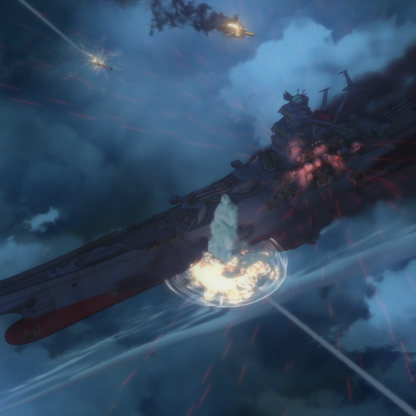 Yamato has always leaned very heavily on naval and maritime metaphors, but it really took the cake this time…  What with ships “sinking” into the clouds, and the torpedoes hitting the Yamato – exactly on the waterline and with exactly the same kind of shockwave and cloud a waterborne torpedo would create.

I see that I haven’t spoken much of the plot and the action, but as usual Scott (linked below) has you covered.  Click on the link and check out his admiration for the episode.