Not an action filled episode, but a prelude to the action. Not much happens in some ways…  But it’s filled with interesting character moments, and brings past threads and events into the current context.  Most importantly, it’s setting the stage as 2199 moves towards its climax.

Hit the jump and let’s take a look!

This episode has strong parallels to WWII…  Yamato is approaching the Gamilas homeworld, and the Gamilas are increasingly desperate to stop her.  With the main fleet trapped at Balun – they’re resorting to desperate measures.

As a side note, I wish I could find again the account of a WWII Japanese anti-war protestor I read years ago.  At the start, he was a loyal servant of the Empire…  But eventually he discerned that the “Victorious Battles” depicted in propaganda were actually getting ever closer to the Home Islands.  This lead him to realize, correctly, that Japan was losing the war and to eventually start protesting the war.  Eventually he was arrested, imprisoned, and tortured – and but survived the war to become a leader in the postwar world peace/nuclear disarmament movement.

Somehow, this episode reminds me of that.

This is about as blatant a historical reference as you’ll find in the series.  It directly refers to the 442nd Regimental Combat Team – a formation comprised of Japanese-Americans who fought in the European Theatre during WWII.  Like them, the Special Platoon is made up of “second class citizens”.  And honestly, that leaves me conflicted as hell because here they’re depicted as being among the bad guys.  Is this a leftover from the militarism and nationalism that permeated the original series?  Or is it because my views are inescapably colored by America’s victory and WWII propaganda and racism that still finds echoes in our culture today?  I don’t know.

This isn’t the first time they’ve made a distinction between the classes and types of Gamilas citizens.  Way back in episode 8 when a group of military men from the Second Class sacrifice themselves for the Glory of the Empire – their families are given honorary (and I suspect non-hereditary) promotions to the First Class. 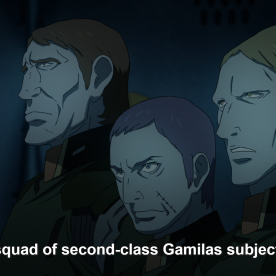 This sequence is… Interesting in what it tells us about Gamilas society.  When the command team (made up of First Class Gamilas) questions the loyalty of the Special Platoon – they break out into the Gamilas National Anthem to demonstrate that they are loyal.  And the First Class citizens and others seem to feel compelled to join in. 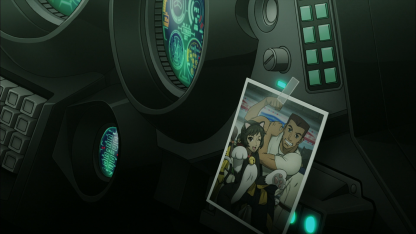 This group of moments…  collectively very powerful.  A fighter pilot with a picture of his girlfriend(?), Captain Okita with a picture of a child(?) and a spouse, General Domel with a picture of his wife (in prison as a traitor) and his child (implied as having died).  Despite their nationality…  Gamilas and human alike are consistently depicted as being people with emotions and motivations.  When the ultimate approaches, we all seek fond memories of happier times to steel us against the unknown ahead, regardless of our nation and the color of our skin.

I feel kind of sorry for General Domel though.  His undying loyalty to Dessler was exploited by imprisonment to lend credence to the idea that Dessler was dead and to reinforce the power of the Empire by showing that not even the popular and loyal could escape ‘justice’.  And his reward for that loyalty was bitter fruit indeed – to be sent forth against a powerful foe with a threadbare force.  But go he does, unquestioningly.

But enough of that…  The humans and the Gamilas aren’t the only ones with skin in this game.  The Iskandarians have an interest as well, and this episode doesn’t let us forget it. 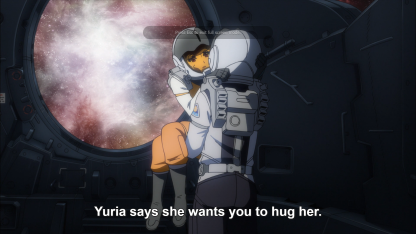 This is an interesting depiction…  Yurisha (in Yuri’s body) does have hopes and dreams.  But, unlike the Gamilas, she doesn’t quite seem to have human emotions.

Yurisha is deeply concerned with humanity’s misuse of the Wave Motion Engine plans to also create a weapon.  Those plans were a gift to humanity, to restore life to the planet not to enable them to visit terrible destruction on their enemies.  She questions whether humanity is any different than the Gamilas and the death and destruction and dominance they’ve visited on peoples across the galaxy.

Captain Okita swears that if this is a test – humanity will prove they are different.  That humanity is worth saving.

Who exactly are the Iskandrians?  Why are they so opposed to war?  So interested in life and salvation?  These scenes, and Yurisha herself, leave us with more questions than they do answers.

And that lends ambiguity to this scene…  Who are “they”?  Humanity?  The Gamilas? And I’ll end here…  Right where the episode ends.  On one of the tightest and most emotionally fraught cliffhangers in the entire series.