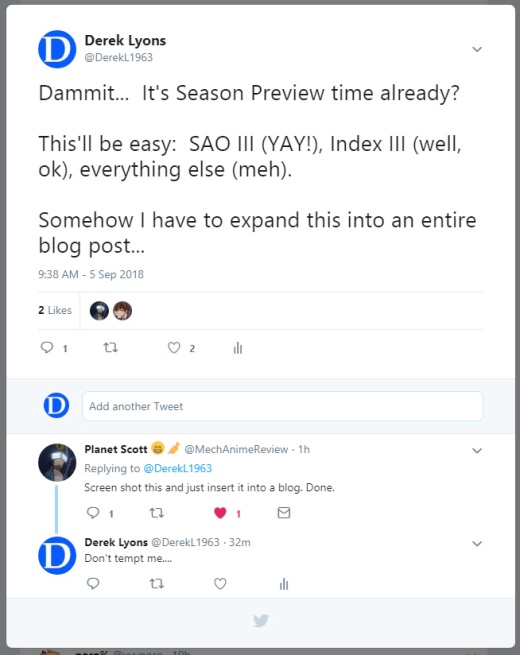 OK, it’s not quite that bad…  But with everything else I’m working on I do have to admit to being sorely tempted to just leave it at that.

Anyhow, hit the jump and let’s take a look at my picks for next season.

As is the tradition here at the Apprentice Mages Lounge, not going to play coy.  Just going to start at the top and work our way down.

Anybody who knows me, knows I’m a fan of the franchise – so it should come as no surprise SAO tops the list.

The most interesting/amazing part of the series is the announcement that came out Sunday – they’re going to adapt the whole thing in one go…  They’re planning a four cour series.  Let that sink in for a moment, an entire year of SAO!  I dunno if they’re brave or insane or both, but it’s gonna be a h_lluva ride.

To be honest, I’m more of a Railgun fan than I am an Index fan…  And I often find Index dense and perplexing, and not in a good way.  But there’s some fun action sequences and the mythology/backstory is interesting (when it’s not being dense and perplexing), so I’ll be watching.

This season’s magical girl show (there’s one almost every season)…. But, the series was conceived and created by Takahiro, who also created Yuki Yuna is a Hero.  So color me intrigued.

This summer has been crazy busy, so I haven’t really had time to do my usual research…  I didn’t even know about this anime until I saw a news item on ANN just now (while looking for SAO III article with the video above).  It’s P.A. Works, and I always check out their offerings.

On the list on the basis that it’s from KyoAni, and like P.A. works I always check them out.   (Plus I seem to be finding myself interested in sports/school club anime.)

Yuri Romance that’s getting a ton of buzz and has some serious weight on it’s staff.  Yuri isn’t a genre I feel strongly about one way or the other, but so far this year has been seriously lack in good romances.

CGDCT – right in my wheelhouse.

Heck…  I usually have to cut myself off at ten previews, but this season I barely managed eight.  If it wasn’t for SAO and couple of strong contenders, this would be seriously depressing.  Doubly so since it comes on the heels of a generally depressing Summer 2018 schedule.

On the other hand, there are a few not listed here that I know I’ll be checking out if they get announced…  so maybe there’ll be a hidden gem or three.

As usual, I’m not getting my  hopes up too much in advance of the announcements of what’s getting a legal stream in the US.

Anyhow, what do you think of these shows?  What are you looking forward to?  Drop a comment and let me know!