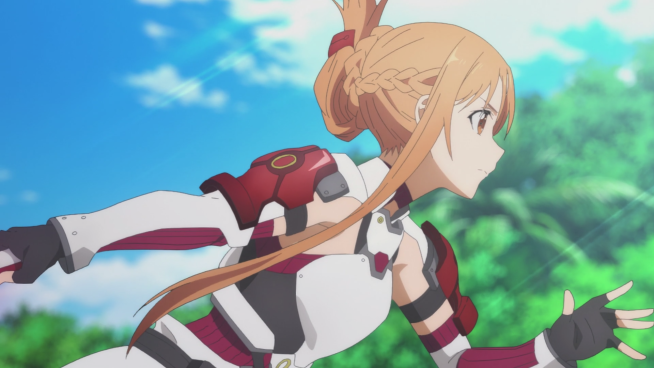 Wow…  it’s been a busy week…   The rest of the season premieres, plus a bunch of shows start to expose their true colors in the second episode.  And of course, we got Asuna in badass mode!  It’s been a good week!  Hit the jump and I’ll run down my week!
The shows that I am watching are in bold, shows my wife and I are watching together are in bold italics, and  marks dropped shows.

Nick isn’t without a point…  Anima Yell! has a lot of things going on and could go in any number of directions.  Though you really have to credit Kohane and the lengths she went to in convincing Hizume she was serious…  It may end up being more SOL/CGDCT than anything else, but taking the sports elements seriously gets a thumbs up from me.

Other than that, it shades towards the generic and Kohane can be a bit grating…

I have to say, other than watching Hange exult after the test, not a fan of this episode.  It was nice to see Historia settling in as the People’s Queen.  And I imagine Grisha Jaeger’s background will be important in the future (especially if we ever get to that damn basement)…  But it was a long wandering journey through the episode to get not much in the way of information or plot progression.

/ Sora to Umi no Aida

OK, I could take all the generic elements and the tropes…  But the very forced misogyny got very old.  There’s nothing wrong per se with a “person’s gotta prove themselves” storyline, but you can go overboard – and they did so enthusiastically.  Though honestly it wouldn’t have taken nearly so much, the tipping point was the actual fishing.  It was so frickin’ obviously explaining the gameplay of the mobile game…  And so frickin’ ridiculous and overblown.

Status: After hitting the “Remove from Queue” button, I washed my hands and wished brain bleach was actually a thing.

All in all a standard setup episode, leaving us with enough interest to tune in next week.

While titling this screenshot..  I almost typed “Bloom Into Yuu”.  Hmm.  Giving the MC’s name, that adds some meaning to “Bloom Into You” doesn’t it?

I think the only thing that really bothers me is that Namami senpai‘s confession to Yuu came just a bit out of left field.  I really hope they go back and retell the first part of the story from her POV.  Otherwise it feels a little like it was shoved into place to get the story rolling.

While we were watching, I kept feeling that I knew/recognized Namami senpai‘s VA.  Usually I’m wrong, but this time I was right – Kotabuki Minako also voices Asuka in Sound Euphonium, and I’m in the middle of a rewatch ATM.  Yeah, I need more to watch like I need another hole in my head…  But it just feels right.

My wife hadn’t planned on watching this, but she was on the other end of the couch when I was watching and got caught up in it.  So, Bloom gets promoted to an “us” show.

Status:  Liking it, watching with hopes it improves and smooths out.  Keeper.

Frankly, lame and predictable and… not that good.

Status:  One more episode I think, then it’ll likely end up dropped.

Bunny Girl… has gone in an entirely different direction than I expected.  Not quite a romance.  Not quite a story of teenage alienation.  Not quite a SFnal tale (though it seems to have some SF elements lurking).  But I am enjoying it!

The evolution of Sakuta and Mai’s relationship is interesting…  She’s not quite the tsundere she acts like.  And he’s not as disinterested and emotionless as he acts like.  Both of them seem to have been through a lot, and are thus reluctant to open up.

And the end of episode 2, that seemed an awful lot like a cliffhanger, didn’t it?  Not in the usual sense, but maybe in the emotions between Sakuta and Mai.  I can’t put my finger on it quite.  (I say that a lot, don’t I?)

I…  I… think I’m in love.  I don’t quite know how to explain it though.  It’s not P.A. Work’s usual stunning animation.  It’s not how oddly relatable Hitomi is.  It’s not the smooth flow of the story.  Maybe it’s all of those things.

Hands down, my favorite premiere of the season, nudging out Run with the Wind by barely a nose.  I always love first eps that just drop us into the thick of the action and leave us with valid questions (as opposed to holes)…  They’re hard to do right though, and Iroduku nailed it.  That cliffhanger… 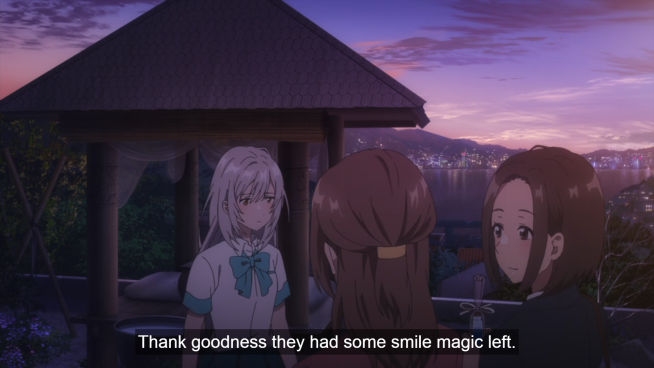 I loved this little detail telling us how mundane and common magic is in this world.  It’s not world-shaking or apocalyptic, but just routine day-to-day like toothpaste.  “Gotta look good for tomorrow’s presentation!” Make no mistake though, Grandma’s time spell shows that some serious magic is on tap when needed…  That’ll be a plot point I bet.  Few stories about magic even try to dodge that one, or the ethical dilemma that comes with it.

My only reservation is…  This is a P.A. Works original.  And that means the spectre of Glasslip is lurking in the wings.  Crossing my fingers here!

The PriPri vibes didn’t survive the first ep, but that just means that Spyce will be judged on its own merits.  By that standard it’s… not bad.

That sounds kinda wishy-washy, and yeah I guess it is.  The first ep was decent and workmanlike, but that’s about all.  Infodump, action, and character development were nicely balanced and the ep moved briskly along.  They left the full introduction of the villains to the next ep via a cliffhanger, which I thought was nicely done.

I did like the way Ishikawa senpai treated Momo (the new recruit).  She didn’t look down on her for being a newbie – she was just matter-of-fact.  “You’re not like us – but you can be if you find the courage to take that first step.  Everything builds from that.”

Status:  Might be more eventually, but for the moment it’s a fun piece of fluff.  Keeper.

“The Ogre’s Arrival” – I’ve rarely seen an episode title more on point.  And not only is Haiji an ogre, he’s one cold and calculating son of a biscuit eater.   He’s recruited the residents for their athletics, and he’s taken the time to get to know them…  and exploits their weaknesses.  His divide-and-conquer strategy just takes it to the next level.  Fascinating to watch, and completely unexpected.

We’re also starting to get a better feel for the interactions and hierarchy among the cast.  Yukihiko is going to be the one to watch here as he seems to be the center of the emerging resistance.  I wonder what Haiji sees as his weak point?

Hmm…  Though he acts otherwise in public, Nico-senpai seems to have already decided to run.  And they didn’t show Haiji trying to convince him.  Interesting.  Maybe this will be less of a tale of Haiji convincing the others and more one of each individual finding his own reason to run.  That a common trope in sports anime, and it’ll be interesting to see how they spin it.

The contest to see “who wins and gets their say/way” is an old and well worn anime trope…  Watching two young adults (rather than adolescents) face each other down to prove their manhood felt realistic though.

My wife checked out the shows on offer and is interested…  I expect she’ll be onboard after this episode.

Pre-publish edit:  After writing that, she watched both eps and loved it.  Wind is now an “us” show.  Almost wrote “promoted to”, but that sounds like it’s dissing the shows she’s not watching.

Honda-san committed the worst sin a first episode can commit…  I was freakin’ bored to tears.  Nothing happened, which is OK, but they also didn’t give me anything to keep my attention – just a bog standard day at work.  You have a weird premise, you have to do better than that!  Show me your style, give me a reason to keep watching!  If your MC is just a dull working schlub, skull face or not I’m done.

Status: Dropped at the eyecatch w/o a second thought.

My feelings about the ep are mixed…  Sure, I’m as happy as any fanboy can be that SAO is back.  (And SAO haters can keep it to themselves.)  But despite the enjoyable nostalgia, this wasn’t the best of episodes.  The first half was pretty much tedious worldbuilding, the second half mostly tedious infodumping.  All very necessary, but SAO has done it better (much better) in the past.

Dat cliffhanger though…  Now that all the introductory stuff is out-of-the-way, it looks like we’re going to dive straight into the plot.

Status:  Did I mention Asuna is Best Girl?  Oh, wait, that’s not what I’m supposed to say here…  ahem  Despite a rocky first ep, SAO is back baby and I’m glued to my seat.

Slime dude continues his quest to become a typical overpowered isekai protagonist…  Yeah, other stuff happened but that’s what sticks in my mind.  Slime is hovering awfully near the drop zone…  Despite the interesting premise, they’re not really doing anything different or impressive with it so far.

Didn’t see that coming.  Instead of going back to 653 (as you would have expected), they follow the suggestion of a sketchy fortune-teller and end up on 696.9 instead.  Is the sketchy fortune teller the girl from the tree at the end of episode 1?  Bet she is.  Bet she’s also the person who placed the crystal in Chloe’s path.

That, plus the presence of Asuka-653 and the appearance of one of those bunny things on 696, gives us some hints that something big is going on.  And Our Heroines are being manipulated into playing a part.  Why?  By who?  The answer may lie in what’s currently an inconsistency…  Where is Nana-696?  Asuka Prime didn’t replace Asuka-653 after all.

I was surprised at Nana’s desire to remain in 696.  That’s just uncommon enough in travel stories that I didn’t quite expect it.  They set it up nicely though, keying it to her unhappiness and alienation back ‘home’.

Oh God, she's in "Love and Lies" now. GET OUT OF THERE, NANA.
The Girl in Twilight – Ep. 2 Review https://t.co/bZANAbYDjK pic.twitter.com/R9qR6ezYyZ

It does however bring up something that’s been kind of annoying me…   A lot of folks have been talking about “arranged” marriages, but I didn’t see any evidence of that.  Not having a choice about getting married is not the same as not having a choice of partner.

OK…  While I was wrapping this up, Index III finally dropped…  But with all the errands I have to get to today I really don’t have time to watch it right away.  Since it’s technically a Friday show I’ll watch the first two eps and catch up next week.  (Feel free to talk about it in the comments, I’ll catch the ep later today.)

Speaking of Friday shows, looking at my schedule for this season my normal Tuesday social night pushes watching Wind into Wednesday…  Bunny Girl Senpai is also a Wednesday show…  So, I’ll be putting out my usual weekly post on Thursday this season.  First time in a long time it hasn’t been on a Wednesday…

And wow…  twelve shows this season!  Going to have to pay attention to my writing to keep up and also to not overload/overstress myself.

So, that wraps up that!  With pretty much all the premiers under our belts, what do you think?  Any standouts?  Any early drops?  Leave a comment and let’s chat!