Bloom into You was… just wow this week, the strongest episode this week and arguably of the season so far.  Tsurune finally premiers, and doesn’t wow me at all.  All this and more after the jump!

Index is back, along with all it’s pseudo-religious pseudo-magical gobbledygook and massively overpowered MC.  I mean seriously, people complain about Kirito but not about a guy who can stop any attack (magical or technological) simply by using his right hand?  WTF is up with that?

That being said, yah, I’m glad it’s back and I’m enjoying it in all it’s utterly ridiculous over-the-top glory.

The most interesting development so far is in Ep 3…  Touma’s memory loss has been a Chekov’s gun on the mantelpiece since the middle of the 1st season, and they finally pulled the trigger.  Now it’s out in the open…  and Misaka (Railgun) is pissed.  To be honest though, I don’t remember enough of the story to tell/know whether she’s pissed at him or for him.

Basically your bog standard “now that we’re a club, what do we do” episode..  Except, they’re not a club (yet) so they don’t really get any support from the school other than an assigned practice space.  Also standard, a member (Kohane) studying hard with the help of her clubmates to improve the club’s chances.  Yeah, though standard it does show how determined she is when it comes to cheer.

The latter part of the episode was interesting.  Asked to cheer for someone in a situation where cheering isn’t really applicable, they still sit and hear her out and offer advice and support. Also, HUGE shout outs and props for taking the situation seriously and not laughing, jeering, or shaming. 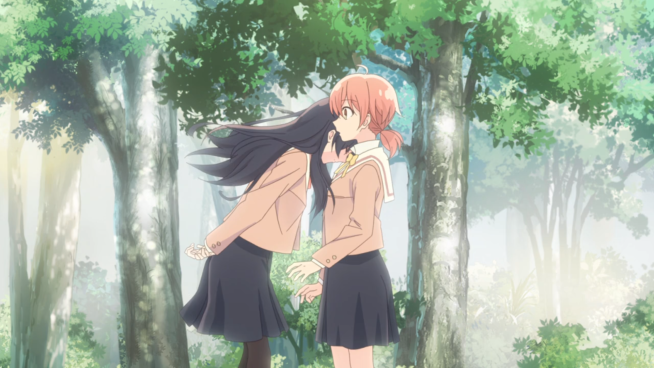 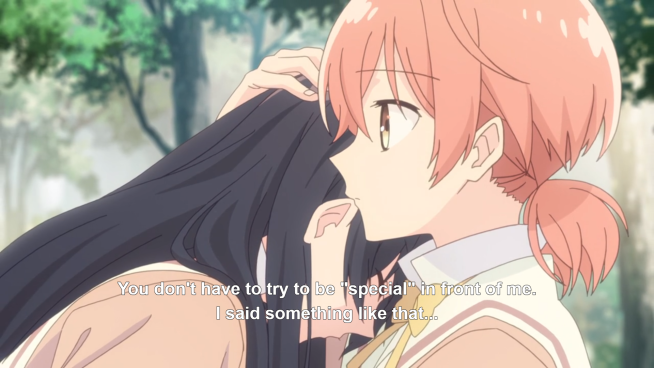 That was…  one h_ll of an episode.

Touku continues to court Yuu, but she’s not being a stalker or being creepy or forceful.  She’s just being her.  She’s simply there as a friend without forcing her attentions.  On her part, Yuu still doesn’t ‘get’ this love stuff..  But without even realizing it herself, she’s starting to accept Touku, as a close friend if nothing else.

And that all culminates in the scene above.  I’ve seen kissing scenes aplenty, and more than a few (implied if nothing else) sex scenes, and every variant you can imagine…  But I don’t think I’ve ever seen a scene as poignantly, beautifully,  intimate as the ones in the screenie…  Tooku takes the ultimate, irrevocable, step of opening her true self to Yuu and she accepts it unconditionally. 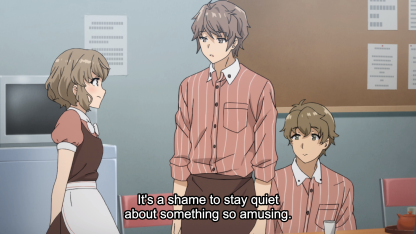 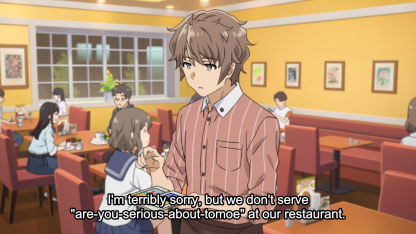 Sakata gets some great lines, doesn’t he?

It seems the anime is going to follow the structure of the light novels, one volume on one girl and then move onto the next.  Not a bad structure overall, and I’m glad it takes the form of a continuing story rather than resetting reality each volume.  Though resetting reality could make for an interesting meta-tale given the stories already revolve around resetting reality.  One interesting consequence of this is now that Sakata is involved in solving Tomoe’s problem, he’s also faced with working things out with Mai.  She’s a strong willed cuss and unlikely to make that an easy task.

There was a lot of comment this week about Hitomi using a Pocky (sorry, “Popocky”) while she was trying to get the coffee cup to levitate.  I think some of that is because we’re used to Harry Potter and various kinds of RPG’s, where a wand is intrinsically magical.  Here it seems to be used more as an aid to concentration, which makes sense to me as her Great-Grandmother emphasized focusing.  That also seems to be consistent with the water walking scene…  As long as she believed she could do it, everything was fine.  But when she was distracted… splash! 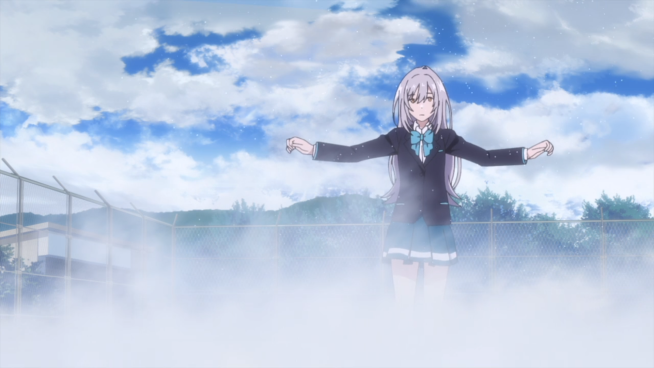 There was also some commentary about the Photography Club’s competence and approach to recruiting members….  All I’ll say at the moment is that looking at it as a photographer and someone who sometimes teaches photography it’s not as simple an issue as it appears.  There’s more than meets the untrained eye and I’m still ruminating on how to express that.

The first part, Momo’s confidence and skill issues, went past pretty fast…  we’ve all seen that before.  The second part, where we finally get a good look at the villain group was much better…  Interesting that they hire/rely on mercenaries rather than having their own troops.  I don’t think I’ve ever seen that before.  Loved the action scene with Momo and Fu battling Byakoo…  Classic!

The mystery here, who is the traitor?  For some reason I can’t see any of the senpais being a traitor…  So it’s either one of the other apprentices or (my pick) the curry shop girl. 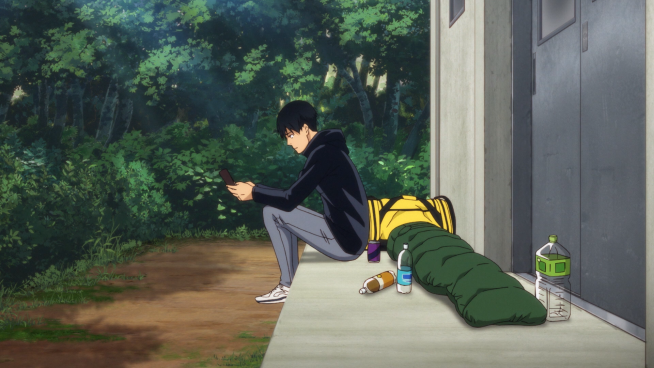 So Kakeru hates his past self…  Not just the events with the running club, but gambling and the consequences of that too.  And it wasn’t just one instance either, he was sleeping rough even before he no longer had money for food – and chose gambling over food.

That being said, it’s still not entirely clear to me exactly what his past trauma was or what role the former friend will play.

I laughed my _ss off at The Prince’s monologue and it’s untimely ending.  :)  We still don’t know what Haiji sees in him, but his character is finally emerging.

Fortunately, the final moments of the ep promise that we’ll see some action soon.  On the flip side, it’s a depressingly familiar SAO scenario – there’s a damsel in distress and Kirito has to come to her rescue.   Want to know the reasons Asuna is Best Girl?  She’s never been a cardboard cutout in need of rescue.  She couldn’t escape Sugou’s trap on her own – but she damn well tried.  She faced down the monster lungfish thing.  Kirito and her mother have both tried to steer her onto a path, and she’s told ’em both to go pound sand.  And when Kirito was dying because of Kuradeel’s treachery, she took it on herself to be the one doing the rescuing.

Ahem, ok, enough of that.

Though SAO is not a harem anime (no matter what the clueless critics say), this habit is why the charge of being one is so often leveled against it.

A western themed world?  Now they’re just being silly.  And how long will it take them to figure out that things aren’t happening by chance?

I think I can predict how the rest of the show will go…  Each girl in turn will have her personal issues worked out and gain the ability to become an Equalizer.  In the final ep, they’ll confront the Big Bad.  It’s all been done before.  Trying to find how many eps Twilight is supposed to have I came across something I’d forgotten – the anime is a promo for a mobile game.  Yeah, that just increases the feeling that they aren’t going to color outside the lines and explains a lot about the show so far.

Kudos though for not making the game play elements too obvious, that’s actually pretty rare. I don’t have anything useful to say about Slime this week…  But I couldn’t help but admire this joke.

So far, pretty much a standard setup for a sports/club anime.  Of course, being Kyoani, it’s a lushly produced and well-directed standard sports anime!

But being Kyoani can’t save it from being compared to Run with the Wind and Tsurune comes off the field in a losing position.  They threw a ton of characters at us, and none really have any distinguishing characteristics or personalities…  They’re pretty much all archetypes.  I have to work at it to remember them as distinct individuals.  The MC is one we’ve all seen a million times before.  At the end of the episode, I didn’t really feel any tension because of the sense of “BTDT, I have a feeling I know what happens next”.

Tsurune is really going to have to up it’s game in the next couple of episodes to break out of the pack, and I don’t get a feeling it’s going to even try.  It might have rated better in a slower season (such as Spring or Summer of this year) or a season where it wasn’t going head to head with a closely related but better executed show.

I think part of what’s making it easier to write of late isn’t just the shorter form…  As I was working on this week’s entry, I realized I was simply assuming the reader had watched the episode.  Not having to describe what happened unless it’s really relevant and needed saves an awful lot of energy.  Since I think of what I do as more commentary than review, yeah, I’m gonna just roll with that.

Too bad Karandi has already trademarked the concept of the “100 word review”….  (I kid, I kid…)

So how did your week go?  What do think about my thoughts?  Drop a comment and let’s chat!