We say goodbye to Titan as it goes on hiatus and to a couple of other shows as they hit the drop bin…  But here was also some darned good episodes this week.  Hit the jump and let’s chat!
The shows that I am watching are in bold, shows my wife and I are watching together are in bold italics, and  marks dropped shows.

Bog standard school club stuff this week.  Having recruited Hizume in the first ep, Kohane’s sights are now set on dragging Uki (her best friend) into the madness.  In the end Uki capitulates, though that was more because of Hizume’s Super Cheer Powers than anything of Kohane’s doing.

Hmm…  Who is the actual MC here?  Kohane or Hizume?

A very odd episode indeed.  It felt more like an OVA or an extended PV than anything else.  Either way, I loved the ending with the Scouts setting confidently out to retake the wall the full support of the populace.  Of the teasing about The Basement – dammit, I hope they mean to follow-up this time.

And with that, Titan goes on hiatus until April.

I would describe this episode as disturbing.  With that sudden kiss, Touku certainly raised the ante.  Yuu, for her part, decided to play along with the gag and took hold of Touku’s hand while the group picture was being taken.  I guess that’s the disturbing part, she’s still feeling nothing yet decides to reciprocate out of consideration for Touku’s feelings.  I’ve never been fond of that particular mode of storytelling as it seems borderline abusive to straight up lie in that manner.

It’s also interesting how fast Sayaka came and went from focus…  She seems to have been too important in the past for it to be that simple.  Even a strong friend, with no romantic entanglements…  Who gives up that easy who isn’t a doormat?

This week’s ep could be best described as “good twin, evil twin”.  The first segment, the good twin, was touching.  I loved watching Romio try to be a good boyfriend, and the exchange of personal gifts was lovingly handled.  The bad twin…  Ick.  That “date” was as ham-fisted and trope laden as anything I’ve ever seen.

Taking both episodes into consideration…  The good does not sufficiently outweigh the bad.  We’re done here.  Dropped.

That was unexpected, and entirely too pat…  All Sakuta had to do was announce his love for Mai to the whole world, and the entire situation is resolved?   Bleh.  They just took everything that was good about the show, wadded it up, and tossed it into the garbage.  From the looks of it, we’re done with their relationship and are moving on to another problem with a different girl…

Is this going to turn into a harem?  Have we seen the last of Sakuta and Mai’s close-but-sarcastic relationship? I certainly hope not.

On the surface just another “starting at a new school” ep… But there was a ton of character development.  Just because the framework is something we’ve all seen before, that doesn’t mean there isn’t meat in the details.

Iroduku is a world of both magic and technology, marthaurion and Nichi Nichi-chan inspire some thoughts on both…

I actually like this scene as it’s classic “showing rather than telling”.  If you watch a lot of anime, you’re used to massive infodumps and excessive details that are standard parts of LN and game adaptations.  OTOH, Iroduku is using what Robert Heinlein called “and the door dilated” moments [in SF].  That is, worldbuilding details are revealed implicitly in the course of the natural action rather than explicitly (the aforementioned infodumps).  This also serves to give us a sense of the world as Hitomi sees it, as a place strange and different from the one she grew up in.

This is older and more literary form of world and character building than we might be used to.  Personally, I find it refreshing.

On the magic front things are…  less well handled.  As mages live in the world rather than separated from it, it makes sense for Hitomi to attend a normal high school.  From what little we’ve seen, magic runs in families, and we can assume so does training in the magical arts.  What doesn’t make sense is that mages can cause property damage and nobody seems to care.  I mean, how is teenage Kohaku allowed back in school and all they want from Hitomi is a simple waiver?  It seems somebody would care.  And what about Grandma Kohaku and her time magic?  That’s some powerful sh_t right there…

That’s one the thing that The Irregular at Magic High School (Mahouka Koukou no Rettousei) got right…  If mages are powerful enough to be living weapons, folks on both sides of the law are going to be very interested.

On the more positive front, I loved the restrained way they showed Hitomi viewing Shou’s artwork…  only a faint reflection in her eyes (which I missed the first time around) and a quiet private smile.  Impressively intimate.

A fairly slow-paced training montage episode.  For all that, it was pretty well handled and showed the wide variety of skills a schoolgirl spy would need to master.  Yuki took her role as sensei/Master very seriously, as did Momo in her role as student.  A hint about “being prepared” was all she needed to rig the final exam in her favor.

I admit to giggling through the introduction of Tsukikage’s headquarters.  It was so freakin’ over-the-top but they played it with an absolutely straight face.  Thinking back, that was true of the training montage too.  I guess you could say that’s fast becoming Spyce‘s defining characteristic – it’s practically a parody of itself and somehow they’re making that work.

After two strong episodes, Wind was bound to eventually bobble one and that was certainly what happened this week.  The basic framing, getting started on their training, wasn’t bad…  But the execution was all that great.  The sub-plot with Hanako felt, frankly, a little on the slimy side even though she was a willing and knowing participant.  Even if it had been a college age girl, rather than minor, it would have been distasteful.  I get it, Haiji needs to motivate everyone, but that could have been handled much better.

On the other hand, getting involved directly in Yukihiko’s business make more sense.  It still casts Haiji as a SOB, but that’s consistent.  We’ve known he’s a SOB since the middle of the first episode.

And could we just be done with Kakeru’s issues?  Did we really need Someone From The Past to make an appearance?

Instead of jumping on last week’s cliffhanger, they took an entirely different tack.  We don’t see the IRL consequence of Death Gun’s attack…  Instead, Kirito reboots into the Underworld.  I’m guessing he’s in the Soul Translator equivalent to a Medicuboid?

Inside the alternate reality, it looks like years (almost a decade?) has passed since the events of the first episode.  But two things stick out…  The first is that Eugeo has no memory of Younger Kirito, and only dim memories of Alice.  The second is that Underworld Kirito has aged right along with Eugeo and grown from pubescence into young adulthood.  I’m thinking that neither of these things are accidental – somebody is actively manipulating that reality.  Why?

Not at all surprising was the ‘new’ Kirito.  In the first ep, he seemed like a meat puppet without any memories of the real world (though with a not dissimilar personality).  In this ep, he’s himself again…  And that means he’s once again brash and getting in everyone else’s business.  Somebody needs saving?  He’s there, dual swords in hand.

And who, or what, is Selka?  And why is she using Asuna’s face?  If I were a Bad Guy intent on manipulating Kirito, I’d get to him through Asuna.  Is that what’s happening here?

A power fantasy story line is common enough in isekai that it would normally pass with little comment.  But Slime took it to a new level, with Rimuru becoming a truly benevolent dictator with strongly liberal politics.  (No judgement, just the facts.)  But he does have his limits…  He ruthlessly killed the leader of the pack, and when the direwolves refused to depart or submit he was not afraid to use his newly acquired powers.  He’s also a realist, when they did submit he made the best of the situation.

That being said, I’m kind of tired of the endless setup and slow pace.  With this episode, I’m dropping planned weekly coverage.  I’ll comment as the spirit moves me.

True to the post-Madoka template, episode 3 is where Everything Changes.

Seriousuka (Asuka-653) lays out the true nature of the world…  Something, or someone, called King Of Twilight is messing with reality for as yet unexplained reasons.  One effect of this is the ongoing degradation of Seriousuka’s world.  Her quest, her reason for roaming the parallel worlds, is to put a stop this. 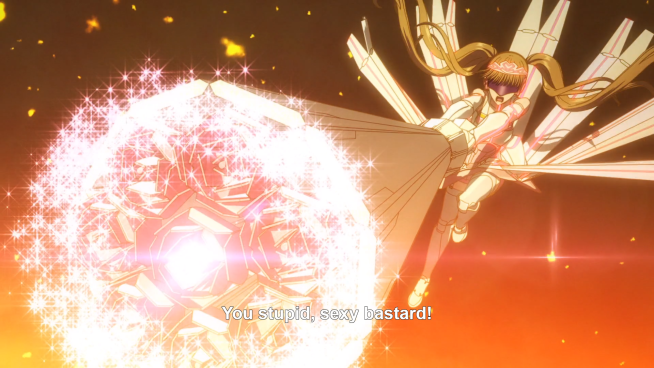 The other big reveal – when a being overcomes their shortcomings, they gain the ability to henshin into something called an Equalizer.  Basically a bad-ass magical girl with the ability to destroy the King’s minions.  Seriousuka has obviously already done so, and now Nana can too.  (I wonder if we’ll get Seriousuka’s full background?)  Anyone who doesn’t think the rest of the girls will gain this ability over the rest of the season is obviously very new to anime…  (And yeah, for the same reason, I shouldn’t wonder about Seriousuka’s background.)

So…  here’s the question.  Twilight has some interesting ideas.  It also has some seriously generic/tropish elements.  It either just got good, just went generic, or completely descended into crap.  Which way is it going to play out?

My new computer arrived on Monday, and it’s been a joy and an annoyance…  Having a keyboard that isn’t balky as heck makes the writing process much more enjoyable.  On the other hand, now I have to retrain my spellchecker to speak otaku and half a dozen other specialized vocabularies for one of my hobbies or interests.

And there’s the week in a nutshell!  How did yours go?  Drop me a comment and let’s chat!  (Yes, I saw the Big News about various streaming services earlier this morning…  I have a post in work on that.)