The Quintessential Quintuplets is easily one of my favorite shows this winter. With a charming cast of characters and its own enjoyable twists on the classic harem formula, it’s tailor-made for fans of romantic comedies. Not to mention anyone who enjoys shipping wars, because the series reveals in the first scene that our main character, Futaro, will marry one of the five Nakano sisters, and actively encourages viewers to pick sides. Of course, we don’t know yet which lucky sister will capture Futaro’s heart, because what fun would that be? 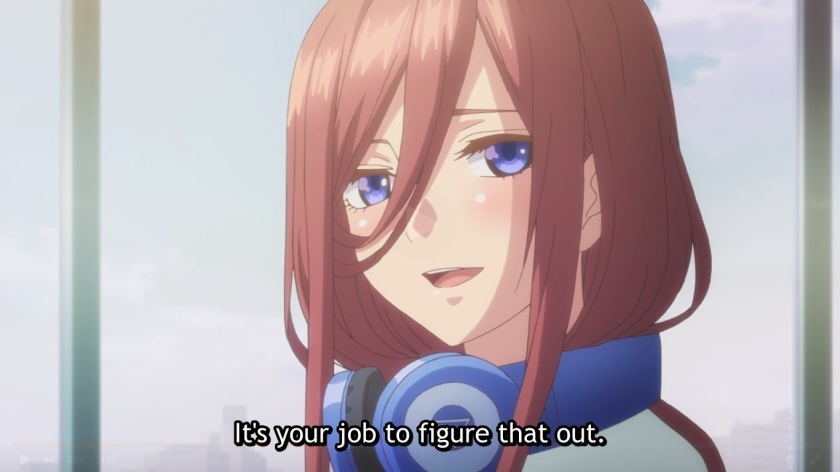 To help untangle this romantic Gordian knot, I present my objective, utterly unbiased, and strictly scientific analysis of each sister’s chances of becoming the lucky bride, along with some bold predictions for how their stories will end, win or lose!

Disclaimer: this is based entirely on the first seven episodes of the anime, and contains mild spoilers for those episodes. I haven’t read the manga, but I intend to start as soon as the anime is over.

Eldest sister Ichika is a playful flirt who cares a lot more about her family and friends than she does about studying or cleaning her room. With a dream role as Futaro’s wife up for grabs, can this aspiring actress play her part perfectly?

How she wins: She accepts Futaro’s confession, but learns afterwards that her agency slipped a “no dating” clause into her contract without her knowledge. After a protracted battle she gives up her career to stay with Futaro, but the injustice of it inspires him to become a lawyer, and together they become crusaders for reforming the Japanese entertainment industry.

How she loses: Once it becomes clear that Futaro’s fallen for Itsuki, she copes with it by throwing herself deeper into her acting. She eventually lands a recurring role on a prime time TV drama as a wealthy heiress with an unrequited attraction to the leading male; viewers and critics rave about the authenticity of her performance.

Prediction: This audition is destined to end with her playing the matchmaker instead of the romantic lead, but she has too many other things going for her to let that keep her down.

Fourth sister Yotsuba is cheerful and sociable, and the only one to immediately accept Futaro with no reservations. But can an easygoing friendship eventually fan the flames of love? History says it won’t be easy, but don’t count this Energizer bunny out yet.

How she wins: With Futaro utterly unable to make up his mind about which sister to choose, the girls decide to settle things by a contest. Yotsuba’s choice, a game of basketball, gets pulled from a hat and she makes short work of her sisters.

How she loses: Yotsuba decides it’s time to confess to Futaro and calls him out. Unfortunately, Futaro already confessed to Miku two weeks earlier, but Yotsuba hadn’t noticed and no one told her because they all thought she knew. Miku convenes a sister trial accusing her of trying to steal her man, and things are tense for a while, but everyone eventually clears the air and she later goes on to win an Olympic bronze medal in women’s basketball.

Prediction: Futaro’s kids will absolutely adore their Aunt Yotsuba someday, and she’ll dote on them like crazy in return.

Youngest and most stubborn sister, Itsuki is known for her tsundere attitude and large appetite. She’s also been squabbling with Futaro ever since they first met. Is a “slap-slap-kiss” in their future, or will familiarity just breed contempt?

How she wins: Under intense lobbying from his dad and Raiha, Futaro finally admits that he actually enjoys arguing with Itsuki, and one combative confession later, they’re officially dating. They go on to enjoy a healthy marriage, and it soon becomes a family in-joke for the other sisters to calculate what the date will be in nine months whenever they start bickering.

How she loses: She makes a valiant charge to the front and briefly takes the lead, but another round of butting heads with Futaro leaves her with a severe concussion that knocks her out of the race. Futaro marries Yotsuba instead, while Itsuki eventually becomes a professional food critic and a regular guest judge on Iron Chef.

Prediction: Itsuki already getting to know Futaro’s family and his circumstances gives them a great base to build on if they can ever both swallow their pride enough to mutually admit they want to be friends (or more). That’ll happen eventually, but two other sisters might be too far ahead by the time they both figure things out.

The second sister is currently ice cold towards Futaro, and her attitude is one of the biggest obstacles in his quest to help the girls graduate. Will she ever learn to appreciate him someday? (Hint: If you just said “no,” then this must be your first harem anime.)

How she wins: Not long after they start dating, a freak kitchen accident involving six kumquats, a spatula, and a toaster oven lands Futaro in the hospital. Nino insists on nursing him back to health, and realizes along the way that she can’t imagine her life anymore without him in it. Once he’s recovered, she wastes no time proposing to him.

How she loses: Nino accepts her defeat to Ichika with seeming good grace, and moves on with her life. Four years later, the Nakano family is rocked by scandal when Nino is arrested on suspicion of being “Emetic Mari,” the perpetrator of a string of drink-spiking incidents that left single men all over Tokyo covered in vomit and mortification. She insists it’s a case of mistaken identity.

Prediction: Because she’s the boldest, most proactive sister, Nino will be among the last to fall for Futaro; if she fell for him first, the contest would be over before it began. But you can be sure she’ll join the race eventually, and she’ll be a force when she does. It won’t be surprising if she wins; it’ll be a shock if she’s not one of the last two in the chase.

The classic middle child, Miku is quiet but keenly observant, and probably the best student of the five (which isn’t saying much). She’s already totally smitten with Futaro, but will her devotion be rewarded? Her legions of fans fervently hope so.

How she wins: Love and loyalty carry the day. Her sisters not only step aside for the sake of her feelings, before her first official date with Futaro they grab her and give her a stunning makeover. The poor boy never stood a chance, and six weeks later he proposes by hiding a ring inside a soda can and saying the words she’s dreamed of hearing. 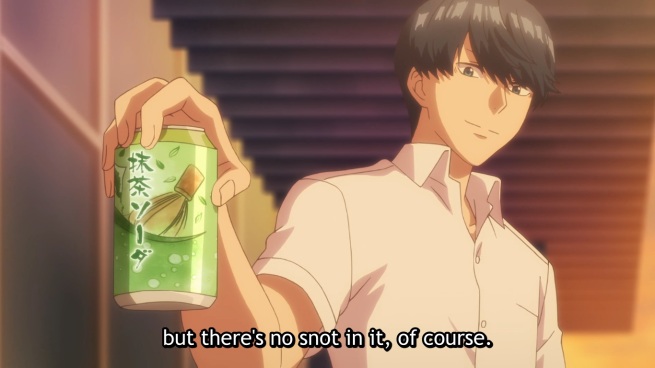 How she loses: Seeing Nino and Futaro get closer and convinced that she’s already lost, she pulls herself out of the race, joins Tinder, and starts liking photos of older bearded men. One of them is the founder of a large tech conglomerate who likes quoting Musashi’s “Five Rings.” When they marry a few years later, their joint finances make them one of the wealthiest couples in Japan.

Prediction: Either she wins outright, or she makes a heroic sacrifice at the climax like Kansuke Yamamoto at the battle of Kawanakajima and steps aside for the sake of Futaro and his chosen bride’s happiness. Either way, she’s the clear early leader after the opening skirmishes of this war, but the die isn’t cast yet.

Agree with those odds? Disagree? Share your thoughts down in the comments, and let us know which sister you’re rooting for! And if you’ve read the manga, no spoilers past episode 7, please!

15 thoughts on “Quintessential Quintuplets: Breaking Down the Contestants [Guest Post]”