Not quite as long as usual because I’ve been procrastinating and had some other stuff going on…  But anyhow, hit the break and let’s get right to it. 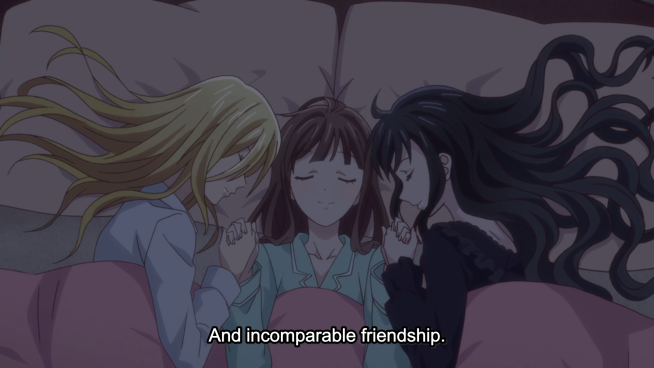 Too much talk, not enough kicking Titan butt.  And why can’t they just kill off Reiner?  It’s not like they haven’t killed off plenty of main or primary characters in this show… Still, even if it has slowed a bit, it’s not all bad.  It was interesting to see Annie again, and more interesting see her react in horror to Marco’s death.  One more ongoing clue that not all of the Titans are “beasts” or unquestioningly dedicated to their Cause.  There’s a lot we don’t know about Titan society, but it’s becoming clear that it’s far from monolithic.  It’ll be interesting to see what they do with this.

Midseason Musings:  Even though the season is uneven…  on the whole, MUCH better than S3P1.  Hopefully the battle in Shiganshina is over by the end of the season, because they’ve really been stretching it out.

The sports and idol anime share a lot of common tropes…  and this week Cinderella Nine showcased one of the most common.  (Especially in the sports genre.)  Tomoe feels that she’s holding the team back – and begins practicing in secret.  She even goes so far as to “break up” with Tsubasa, her childhood friend.  In the end, they make up because they can’t bear to part.

This particular trope lives and dies by how well they’ve built up the relationships of the characters involved.  Cinderella has never been the strongest show on that front, and thus the whole thing came off as contrived and saccharine.  It’s not a bad series per se, but this was not it’s best outing.

Midseason musings:  Though I’ve liked it well enough, Cinderella never has really been anything approaching “must watch”.  If the show was more substantial, maybe I wouldn’t turn so sour after a single weak ep.  (Even it was an especially weak ep.)  I’m gonna keep watching, but…

Status:  I’m voting Cinderella the show I’m most likely to regret keeping.  I suspect another really weak episode and over the side it goes.

As one arc ends…  a new arc begins.  Last episode, Tohru’s grandfather gave his blessing, and this episode her other families gives theirs.

Looking at it broadly, Tohru really has three families.  First is her blood family, who has pretty much rejected her.  Second are Arisa and Saki, both kind of lost sheep and they’ve chosen Tohru as their shepherd and center.  Tohru for her part accepts this, because kindness and nurturing are the twin pillars of her essential nature.

Her third family is of course her family of choice – the Soma’s.  And that’s where things get complicated.  Her immediate family accepts her uncritically.  Her extended family, they aren’t too happy with the whole deal.  Their natures have lead them to closed and isolated, and they seek to reject the outsider.

Midseason musings:  I started off watching this with some misgivings, mostly due to the hype surrounding it.  Though I’m enjoying it on it’s own merits, I’m glad the hype has died down.  The din made it hard to concentrate.

Midseason musings:  Though it has it’s brighter moments, overall I’ve been disappointed with the adaptation.  If it wasn’t a short, and if it wasn’t for the better moments, I’d drop it like a hot potato.

Am I the only one little confused and disappointed here?  After episode 5’s thunderous climax…  the whole story seems to have taken a largish step backwards.  This week’s episode revolves mostly around Hiro – who seems to have joined the club mostly to start sh_t.

On the other hand…  To me, this is relatable as h_ll.  We had a girl join our role playing group who was hell bent on breaking up the group for her own amusement.  She pretty much succeeded, and it took years for the damage she left in her wake to be mostly repaired.

So, I’m curious to see how they’ll handle this.

Midseason musings:  The first half of the series went incredibly well…  But now they’ve on an unexpected path and I don’t know quite where they’re going.  But given the track record, I’ll be sticking around. 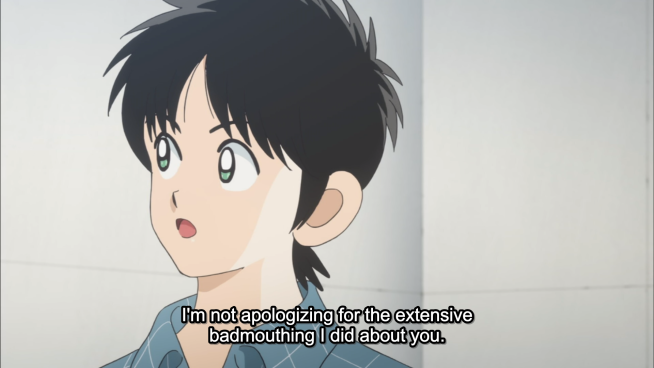 And so we reach the end of Touma and Souichiou’s middle school years… and the end of the what can best be described as the table setting arc.  Humanizing Daisuke was an interesting choice, but I can get why Tou won’t forgive him.  His selfishness cost them and the team a great deal.

Midseason musings:  One one hand, not much has happened in the last six episodes.  Much of what has happened is largely disposable from some points of view…    On the other, we’ve gotten a ton of backstory and character moments.

Plus, if what commenter Dawnstorm relayed is correct – it’s not really the midseason yet, as Mix is probably a two cour show.  This also explains why they felt comfortable spending so much time setting up the scenario.

Not watched this week because I’ve been catching up on Criminal Minds.

But hey, guess who has watched 300 odd eps of Criminal Minds over the last year? And still hasn’t started Hunter X Hunter because it’s “too long”!

Midseason Musings:  I’ve made my unhappiness with the new season pretty clear over the last few weeks, so I won’t bore you by repeating myself here.

Status:  Goodnight Saitama, I’ll most likely drop you after the next episode.

Not the best episode…  And the less said about the pooping rabbit, the better.  Though I can say I relate, our guinea pigs produce prodigious amounts themselves. 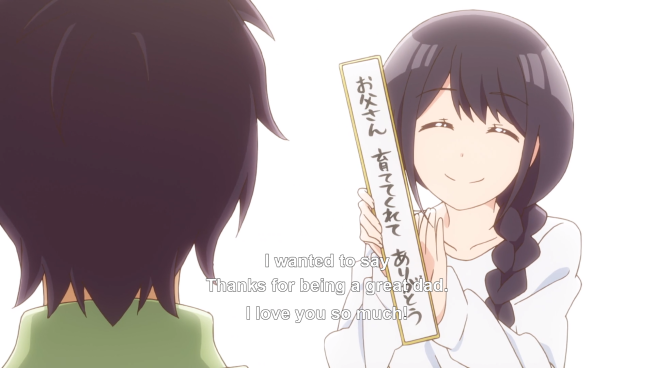 As always, watching Nanako sparkle made me smile, and what more can you ask?  Ah, taking the screenshot reminded me I forget to mention the whole subplot with her father thinking she was going through a rebellious phase…  That was funny as heck.  The senryu spouting delinquent of his imagination made me laugh.

Sorry about the brevity of this week’s entry…  Procrastination hit HARD, and there’s been some family stuff going on in the last week that’s been weighing on my mind.  (Especially after my hiatus last month.)  But I still think it’s worth reading, at least I hope so!

The week 8 entry, two weeks hence, will also probably be light.  That comes after the Memorial Day weekend, and traditionally my wife and I spend all three days that weekend geocaching.  Since almost all of my shows this season are on Fri/Sat/Sun, I don’t know if I’ll be able to watch them all.  We’ve got some longish runs planned – including a visit to only Shinto shrine in North America.

Anyhow, that’s it for me this week – over to you!  Drop a comment with your thoughts and let’s chat!