What is it they say…  New Year, New Me?  Meh, not so much.  Still the same ol’ me, tendency to procrastinate and all.  But we do have a bunch of new anime coming down the pike, and that means it’s time to hit the jump and take a look at the first batch of premiers! As it stands Asteroid is…  pretty generic.  School clubs, problems with school clubs, childhood promises, we’ve all seen it all before.  The only thing that really stands out is the thin strand of yuri running through the show.  It’s not prominent enough though that I think it will be a major plot point.  I suspect the series will be more about friendship than anything else.  Not that there’s anything wrong with that!  It just puts the show firmly in the “mostly harmless moe/CGDCT” category.  Which is just fine.

It’s a bad sign when I start getting bored and wondering just how much more I have to endure before the episode is over…  Seriously, they padded the heck out of the first half of the episode with tons of repetition and re-emphasis of what they had already shown and told us.

How do I know it was the first half?  Because when MC-kun reached the warehouse, I paused to see if this was the cliffhanger or if we had more to endure.  We indeed had more to endure because the freakin’ episode was only half over!  At that point, I could take no more and pulled the eject handle.

Status: Darwin’s Game is the first drop of the season and the year.  Nothing I’ve read by other reviewers leads me to believe this was in any way a mistake.

First year high schooler Midori Asakusa loves anime so much, she insists that “concept is everything” in animation. Though she draws a variety of ideas in her sketchbook, she hasn’t taken the first step to creating anime, insisting that she can’t do it alone. The producer-type Sayaka Kanamori is the first to notice Asakusa’s genius. Then, when it becomes clear that their classmate, charismatic fashion model Tsubame Mizusaki, really wants to be an animator, they create an animation club to realize the “ultimate world” that exists in their minds.

Shows about creators usually get a look see from me…  The description didn’t sound like much, so I didn’t expect much.  For the first twenty odd minutes it was decent and interesting enough.  Then this happened… 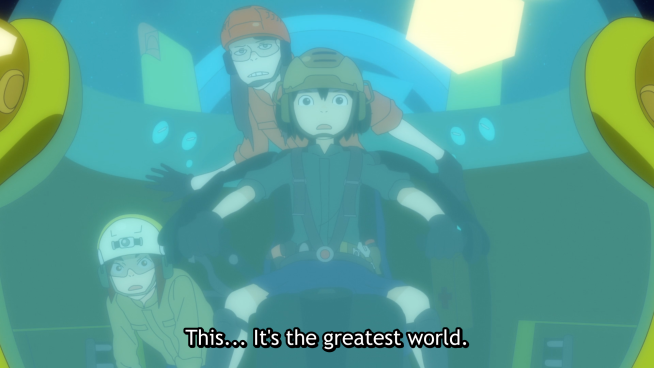 And I’m hopelessly in love…  What a genius way to show what happens when two creators perfectly heterodyne!  And did anyone else catch the progression of the animation in the imaginary worlds?  From stick figures in Midori’s childhood, to storyboards when she and Tsubame began working together, to fully realized at the end?  Beautiful!

Yeah, I’m gushing here because it’s pretty rare that a show so neatly upends expectations in it’s first episode.  There’s a lot of potential and I’m looking forward to seeing where they go with it.

Oh my god, Asakusa just does all the sound effects for their dragonfly craft herself. AOTY pic.twitter.com/mJGVnvxglI

Nick points out something I didn’t realize until I went back and re-watched that portion of the episode.

Speaking of re-watching…  My wife asked if I’d seen anything interesting so far, and I recommended that she check out Eizouken.  I pretty much rewatched the episode right along with her, which is pretty rare.  And the show got promoted immediately from a “me” show to a “we” show.

Screenshot courtesy of Xenodude because I can’t figure out how to take screenies on Funimation w/o their dang controls appearing on the screen.

And now, the elephant in the room.  Magia Record.  Madoka.

I’m not sure what to say or think here.  I am intrigued, but I am also a little saddened by loss of sense of wonder.  It’s not like we don’t know the deal here.  The series plays on this by diving right in with little in the way of backstory, simply assuming the viewer is familiar with the original series.  Does this say they won’t wander far from the path?  Or are the setting us up for a Fall?  The latter would have to be seriously different because we already know how this story ends.  (Presuming that it’s set before the Redemption, which they haven’t made entirely clear.)  On the other hand, there’s no lightheartedness to be found here.  They do respect the viewer that much.

It’s not like Magia Record didn’t leave us with a number of mysteries…  It’s just that so far, they all seems a little contrived and not all that compelling.  That so many were tossed at us in a single episode just leaves me feeling a little lost.  What’s important here?  They made it hard to tell, and being Madoka we’re conditioned to expect important.

Status: I’m in, but with reservations.  I’m interested, but waiting for the ‘hook’ to set. Basically, a longer version of the short skits that were at the end of the full episodes of the original series.  Much faster and more frenetic than I expected, but enjoyable all the same.

Lest this be mistaken for damming with faint praise let me be clear…  The camping girls are back!  Who wouldn’t be, couldn’t be happy about that?  I certainly am.

Status:  As it’s a short, my wife and I are thinking about watching before she goes to work each Monday morning – what higher praise could you ask for?

Continuing from last season, will pick up reviews when weekly coverage returns:
Chihayafuru 3, My Hero Academia.  Except for today’s episode of Chihayafuru, I’m caught up on both.

And there you have it…  I watched all the premieres I intend to watch through Tues (USA – PST), so anything not on this list is fair game.  What have you watched?  What do you think so far?  Drop a comment and let’s chat!