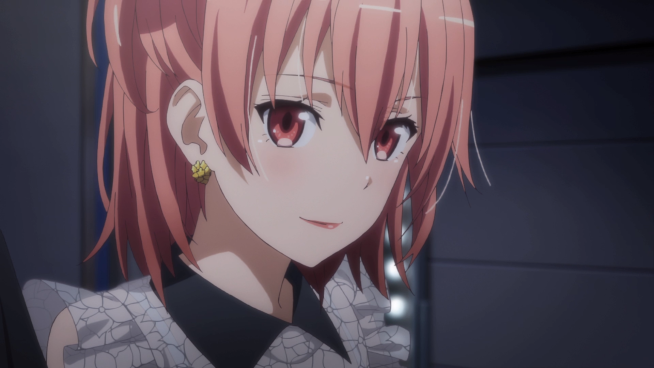 Halfway to the midpoint of the season, and most are hitting their stride!  Hit the jump, and run this week down.
The shows that I am watching are in bold, shows my wife and I are watching together are in bold italics,  marks dropped shows and (*) marks shows that are watched but not regularly reviewed.

Railgun is back…  And a new arc/cour means a new OP.  The music is uninspired, but I loved the “reflected in building” effect.  Seriously, I didn’t think fripSide could make a dull Railgun song, but they certainly did so this time.

The live version has a lot more punch, why mix it down for the show itself?

Other than that, they’re still moving pieces into place.  Looks like it could be interesting – especially if Railgun and Shokuho stay paired up…

Is this actually the third episode?  Because of the massive twist in the opener to the second, it kinda doesn’t feel like it.  Either way, more infodump and a training montage.

The big takeaway from this episode – Natsume may be Kaburagi’s ticket to blowing this world apart…  But he’s been indulging in minor acts of subversion and independence for a long time.   His decision to train her wasn’t quite as spur-of-the-moment as it looked.

There’s going to be a lot of hearts broken before this series is over…  Both in the cast, and out here in the cheap seats.

Once again meandering away from any plot progression…  Lapis now does what I’ve been afraid of from the very start… introducing more characters and pulling the focus away from the lackluster core group.  It’s a “mixed media franchise”, and I think we’re seeing the as yet unannounced gatcha game.

Things aren’t looking good as we round the corner into the Mid Season Gut Check.

Didn’t mention it last week, but once again the idol performance was done in 3D.  This is a trend in idol anime, and frankly I don’t care for it.  The difference in styles is jarring and I have yet to see it done well.  Even the Love Live franchise, who presumably has the budget to do better, screwed it up in Sunshine.

Poor Yui…  No matter where she looks, it looks like her hopes are going to be dashed.  But I don’t think the Hatchiman x Yukino ship is sailing anytime soon either. Though both want something real, open…  That covers a wide range of relationships.  (Despite romantic being in the title.)

So far this season strongly reminds me of Haganai: I Don’t Have Many Friends.  The misfits spent so much time practicing being friends with each other (in preparation for the day when they found real friends) they practically missed that they’d discovered real friendship.  That’s an awful run-on sentence, but I’ll let it stand.

Though there’s occasional glimmers of hope for him…  Kazuya is a garbage human being.  Mami?  She’s fighting hard to take the title of “Worst Piece of Garbage” for her very own.

Massive fun seeing the Gang kicking the tar out of the Bad Guys…  But then…  But then…  All the bad news.  All happening at once/in the same episode.  Good news is I don’t think they can amp the pressure up any further.  And that is a good thing, because it’s currently Very Bad.

Uzaki-chan certainly surprised me this week!  It was (by the show’s standards) a fairly subdued episode with a minimum of yelling and didn’t rely (much) on boob jokes or set pieces.  I like the hints that Hana harbors deeper feelings for Shinichi and would love it if the series moves a little more in that direction.  If they dialed back the father-and-daughter Greek Chorus, I wouldn’t mind it one bit.

That’s it for me – turning the mike over to you.  Drop a comment and let’s chat!