As I sit here typing this, it’s trying to be spring outside…  Yay!   Meanwhile, we’ve had the first batch of premieres for the season and so far it’s looking pretty good. So, hit the jump and let’s dive into the first batch!  Be sure and let me know what you think down in the comments.

Academia picks up just a couple of days after the events of the closing episode of the first season, and almost immediately the same ol’ flaws pop up.  Once again, we’re mired in pacing issues.  The first half of the episode is all about recapping the events of last season (despite having a recap episode that aired last week that was also available on Crunchy), followed by an infodump from UA’s teaching staff.  It’s not till after the break that we get to see our main cast…  And even then things move pretty slowly (I.E. more exposition).  Still, we get some nice character moments, particularly in the reveal of Uraraka’s reasons for becoming a hero.

Don’t get me wrong, I’m still in love with the show, it’s just frustrating at times.

In contrast, Titan wastes very little time…  It  picks up mere seconds after the events of the first season finale.  (Which is a bit disconcerting when two and a half years have passed for us out in the real world.)  There’s a little recap, but most of the episode is devoted to setting the stage for the season to come.  (Which, oddly enough, is only going to be one cour…) 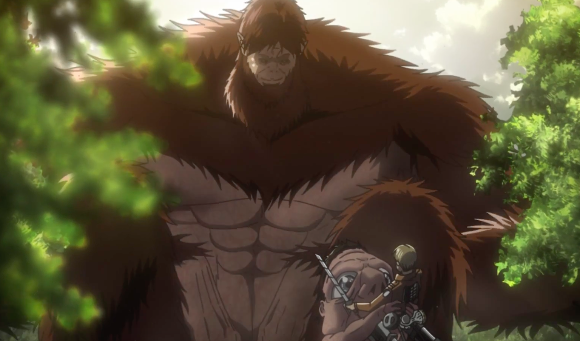 The big guy in the picture?  That’s the Beast Titan – and when he spoke, I almost grabbed the remote to rewind and make sure I’d heard what I thought I heard!  It looks like this season is going to be a helluva ride.

Still, they managed a nice balance between the elements.  The action was balanced nicely with character moments and the sci-fi elements were left mainly to set the stage for more to come.  Speaking of character moments, Zoroku is an interesting one – in some ways the stereotypical gruff old man with a heart of gold.  But whether it’s from a yakuza boss, the police, or a trio of super powered little girls (two of which had nearly succeeded in killing him just moments before) he brooks no nonsense.  (Yes, he encountered all three over the course of the episode.  Not only was it double-length, the episode was tightly paced and they wasted little time.)  Kudos also for not making too much of Sana’s bewilderment at the world outside of the center she’s been imprisoned in.

And who the heck is the girl in the van?  Or the goth-loli that came to Sana’s rescue?  Zoroku is florist, but how is a florist tied up with the yakuza?

But…  The awful CGI used for many of the action/chase scenes kept pulling me out of the show.  It’s going to be a struggle to ignore it in favor of the show’s strengths.

Verdict:  Provisional keeper – let’s see what happens over the next couple of weeks.  I’m not normally a fan of bait-and-switch, but what they’ve shown so far is promising.