Whew Premiere Week (and some) is finally over. There’s a few keepers so far, but also quite a bit of out-and-out meh on track for a third ep drop… Which I really need to do if I want to cut back to a more manageable number this season.  Surprisingly, only one first ep drop this season!

Hit the jump and find out my thoughts, then leave yours in the comments!

I try as much as possible to avoid other comments/reviews/criticisms before I check out new shows so I go in with an open mind.   However, the hue-and-cry over Eromanga Sensei was so prevalent it could hardly be avoided…  Still, it couldn’t be that bad, could it?

It was.  Cliche characters, rote/trope interactions, unsettling camera angles… and trying to be Oreimo without any of Oreimo‘s good points.

There’s some potential interest in the setup as delivered…  but damn was the acting wooden, the pacing glacial, the characters one-dimensional, and the endless exposition excruciating.

Verdict:  I can’t take much more of this.  My hand is inching towards the eject handle…

One of the more realistic romance anime (at least in the first ep) I’ve seen in a long time.   (Though Seiren tried so very hard…)  Despite the glitches, I loved the animation style, its very reminiscent of both Wandering Son (a good series in its own right) and somehow also of Grimgar.  It would be nice if it picked up the pace some, but it wants to amble along at a iyashikei/slice-of-life pace, that could work too.

I have a feeling that there’s a good chance that Tsuki ga Kirei could turn out to be interesting.  On top of it’s realism, they dropped a number of hints of background stuff… 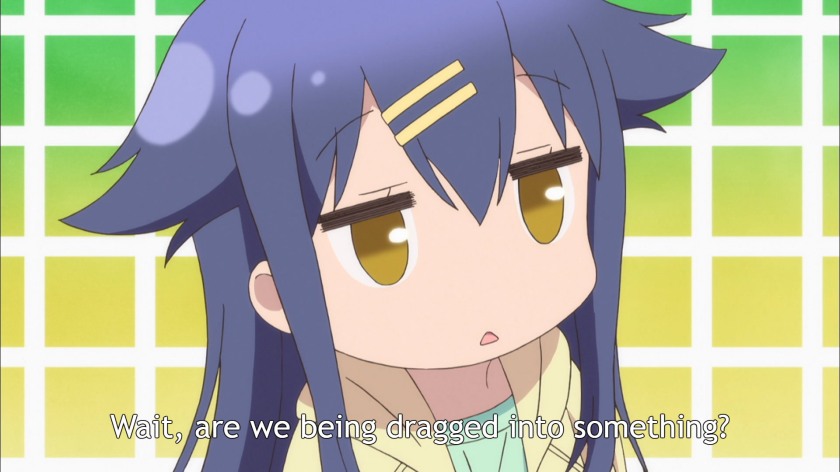 CGDCT that’s pretty much as advertised…  Though slightly offbeat, it pretty much colors within the lines.  No genki girl though – so far.  Looking at the OP, we’ve a character yet to be introduced so I fully expect them to tick that box next week.

The fanservice-y bits right at the end were a bit odd and unsettling for a CGDCT comedy though.

About as generic a magical girl show as you can get…  But oddly enough, it’s airing in the late night otaku time slot rather than a kid friendly time slot.  Really, that’s about the only reason I’m sticking around, to see if I can get an answer to “WTF are they thinking?”.

Well,  I can see why folks might think this is funny…  but it really didn’t resonate much with me.  Possibly because I was planning on swearing off harem comedies this season… (Well, other than Saekano.)  That I haven’t seen the show it’s paroying probably doesn’t help either.  By the end of the ep, they really hadn’t given us any reason to care about the characters. It’s not bad enough to drop right off, but it had better shape up fast.

A boy, a girl, a boy, a long separation, a high school band…  other than the gender swap, it’s Fuuka all over again.  The two series even have the same VA (Hayami Saori) voicing a female lead fer gosh sakes!

And the story itself, what a mess.  They tried to cram twenty pounds of backstory, emotion, and plot into a ten pound sack…  The result was all rush-rush-rush with no time for audience to catch their breath and assimilate.  Maybe it will get better now that they’ve got all that out of their systems.

(Plus it’s committing the cardinal sin for musical anime – failing to subtitle the songs!)

Interesting, we learn of Sana’s past, and are introduced to Sanae (Zouroko’s grandaughter).   Is it just me, or are those two somehow peas in a pod?  And for a humble florist, Zouroko seems to have an awful lot of shady and/or interesting contacts.  Alice is still posing more questions that it’s answering…

I find the opening interesting…  While it does invoke a sense of wonder, it mostly concentrates on what looks like slice-of-life.

Now this was closer to Academia‘s best…  A nice blend of exposition and action.  It was kinda unexpected to see Todoroki leap ahead with such ferocity, but an accidentally encountered spoiler makes sense of it.  (I won’t repeat it, you can find it easily enough if you care to.)

If you haven’t read it, I cannot recommend Frog-Kun’s Crunchyroll feature The Death of Superman in “My Hero Academia” enough.  (Go on, read it, I’ll still be here when you’re done.)  Some pretty powerful stuff there about the literary roots of Academia and the deeper aspects of the story.  Also on Crunchyroll, Bobduh’s regular “Why It Works” column also features Academia – Shadows over “My Hero Academia” is worth reading too.

Another hard-hitting episode (I think I’m going to be typing that a great deal this season), concentrating on Sasha’s background (and why she came to be constantly stealing food).

In other news… How in the haitch-e-doublehockeysticks did Forest Fairy Five get a second cour?

And… Your Name.  TLDR version – My brain is slightly disappointed, but my heart sings!.

Longer version – I’m still trying to figure the whole thing out. There are bits and pieces that don’t quite make sense, and some bits I don’t like how they fit…  but OH the feels. Oh, the FEELS. (All combined with Shinkai’s trademark gorgeous animation.)