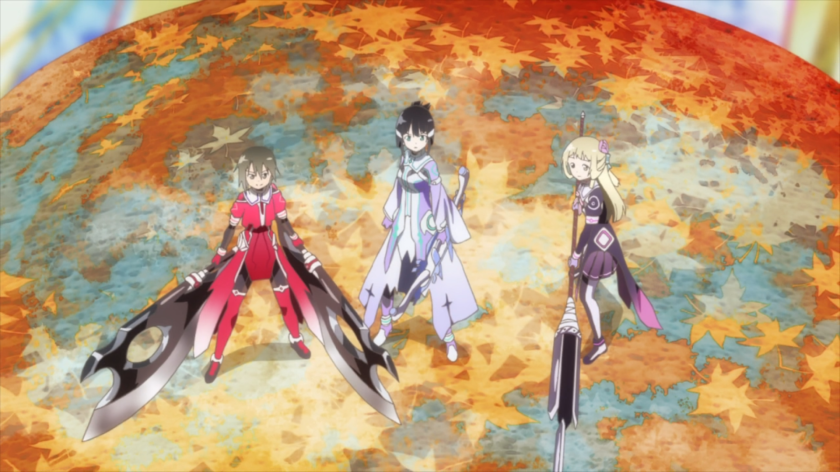 Hit the jump and let’s dive into all the yummy goodness!

All through the episode…  fear, concern, relief, tension – all these emotions meant I kept having to remind myself to breathe.  The only reason I’m ranking this as the second best premiere to date is my absolute fanboyism for YuYuYu.  (Hey, at least I’m honest about it.)

But seriously.  I was kinda “OK, looks like it could be good” after watching the OVA series, but the premiere absolutely blew me away.  Starting right with the opening scene, with Chise signing her life away and accepting her chains it put the pressure on and barely let up.  The occasional quieter moments were just brief respites before the show closed in on us again.  And the ending scene, transitioning from the pressure and darkness to a ray of hope in the darkness was practically pitch perfect. Yeah, the whole bit about “my puppy” is a bit creepy, as is the intent to make her his bride…  But he expresses the latter in the form of a hope rather than a command.  And he is taking positive steps to raise her sense of self-worth and belonging…  Manipulative or merely socially clumsy? The line in the OVA (“I’m your magical teacher, you’re my human teacher”) makes me hope towards the latter.

And serious kudos to Takeuchi Ryouta, his voice work as Elias is simply amazing.

A cliché, trope, and reference filled show about an anime club… The first main character introduced isn’t even sure she likes anime.  (In fact, though she watched some as a kid, she doesn’t currently watch any!)  The second main character is the stereotypical Rich Girl (complete with a butler that appears when she snaps her fingers) who is actually a complete otaku.  (Etc… Etc…)

Yet, I don’t actually dislike it.  It’s really kind of cute and doesn’t take itself all seriously.  In some ways, it’s like they’re telling a well-worn joke and asking us to join in on the telling.

Verdict:  Sure, why not?  It could easily go bad but let’s wait and see.  Tentative keeper.

Mostly harmless CGDCT workplace comedy, I actually LOL’ed quite a few times over the situations and a couple of bad puns.  I could do without the manager’s leering and constant nosebleeds though…  That’s the one bad thing in the show.

Worth especial note – the seiyuus are doing a bang up job.  Each of the girls has a distinctive ‘normal’ (out of character) voice and a distinctive ‘in character’ voice.  Well, except for Maika, and it would be wrong for her to be so advanced so fast…  She is a newbie after all.

I watched this on Friday evening…  and woke up Saturday morning thinking “beautiful, amazing, horrible”.  I’ve spent the last two days trying to figure out what my subconscious was trying to tell me…  with no success.  Each of the three things are true taken in isolation, but I can’t consciously tie them together.  There’s obvious surface stuff, the girl’s situation is certainly horrible of course…  But there’s a deeper horror there too, the darkening world they inhabit.  The hinted at desperation to survive.  Their buoyant spirits in contrast to an uncaring world…  I just don’t know.

Also interesting is the genre mix – isekai, slice-of-life, road trip/journey, etc… and they’re making it work without straining to do so.  Each scene, concept, and connection moves easily from one to the next. What I do know is that Girls Last Tour is very, very good.  If you aren’t watching, you’re missing out.

There was an absolute ton of buzz about Journey, and the description sounded kinda interesting…  But honestly, I’m not sure I’m sold on it.  Though its other flaws didn’t help any, I didn’t care for the “Planet of Hats” atmosphere in Rolling Girls and I don’t much care for it here either.  Kino’s nature as a stolid and unemotional observer of the world around himself isn’t something I find attractive either.

I guess I’m looking for some larger thread to tie things together.  And maybe a sense of growth and change on Kino’s part. I did find the ‘lesson’ learned interesting, but if the series is nothing but a series of Aesopian observations…  that will get very old, very fast.  But some hints dropped by watchers of the original show lead me to hope that things will get better soon.  So…

Land of the Lustrous

I picked up Lustrous mostly because Bless was mesmerized by it and figured it didn’t hurt to check it out.

But frankly…  I’m not finding much to keep me interested.  I’ve seen/read one too many “weak character finds their plot driven destiny” stories for another one with so little ‘hook’ to be attractive.  (And that’s setting aside the eye-searing CGI animation.)  I do find Cinnabar’s story to be interesting, she’s not useless and despised because she’s weak – she’s useless and unliked because she’s too powerful and her unique abilities have devastating aftereffects.  That’s different from the norm.  That attracts my attention.

Verdict:  Unless it gets vastly better, probable drop after Cinnabar’s arc is over.

As the ending credits rolled my only thought was “that’s IT?“.  This felt more like an extended PV or Episode 0 than an actual Episode 1.  They spent a considerable amount of time checking in with all the protagonists and reminding us of their personality traits…  A show confident in itself shouldn’t need to do that. But they did drop two important pieces of information – Aqours failed to advance in the Love Live competition, and the school is still going to be closed.

One of the deepest flaws of the first season was that they spent so much time reminding us that Aqours was following in μ’s footsteps, right down to the ridiculous repetition of the “save our school” plot.  That left very little room for Aqours to breathe and blossom on its own, though some of the best moments were found in those rare open spaces.  We’re still dealing with the fallout of the “save our school” plot, but there was a noticeable lack of μ’s references.  (None in fact.)  Maybe they’re finally ready to let Sunshine!! and Aqours to stand on its own feet and go its own way.

Maybe they’ll let the school actually close, but I doubt it because then the show loses all its motivation as set up so far.  On the other hand, if students from the school they’re being merged with discovers Aqours…  maybe they can address the question “why I am doing this?” in a new and different way.  Are they shining for their school or for their fans?  Just how do they define themselves?

Two Car was down in my “meh, sure, why not?” tier of shows.  The premiere didn’t move the needle much…  Part of that was because it was mostly an introduction to the show’s medium large cast.  Part of that was because they pushed the whole “you two girls are just alike”/”don’t they get along so well (even as they’re fighting)?” angle too dang hard.  I’ve never really thought that endless bickering represented attraction or compatibility.

Still, the racing was mildly interesting and could be more so if they told us more about the strategy.  There’s the bones of a decent sports anime, and I don’t necessarily dislike the whole frienemy schtick…  But so far moment they’ve given me very little reason to care about the outcome of either.

Verdict: Keeper for now, but dangerously close to the edge of the cliff.  If I end up pressed for time, over it goes.

Not nearly as apocalyptic as the original series premiere, but then it doesn’t need to be…  Yuusha no Sho is aimed squarely at fans of the original series and makes no pretense otherwise.  It’s mostly structured around introducing the new (new/old in the case of Washio Sumi/Togo Mimori) characters and the difficulties they face in their first battle together.   I do find it odd somehow that they (like Miyoshi Karin) received some form of battle training, when they didn’t in the original show.  (Not that the battle training seemed to be all that effective.)

There were some interesting and differences in the world and in the Hero System revealed.  The first two pop up during their henshin sequence – this generation of Heroes has neither fairies nor Mankai gauges.  After the battle, we see their teacher explain to the student that the girls have important jobs to do and will occasionally suddenly vanish.  In the original series, the existence of Heroes seemed to be kept something of a secret.

The Mankai system must emerge at some point, because the original series introduces us to Nogi Sonoko who is gravely disabled due to its use.  It was chilling to see her here, young, happy, and battle willing. 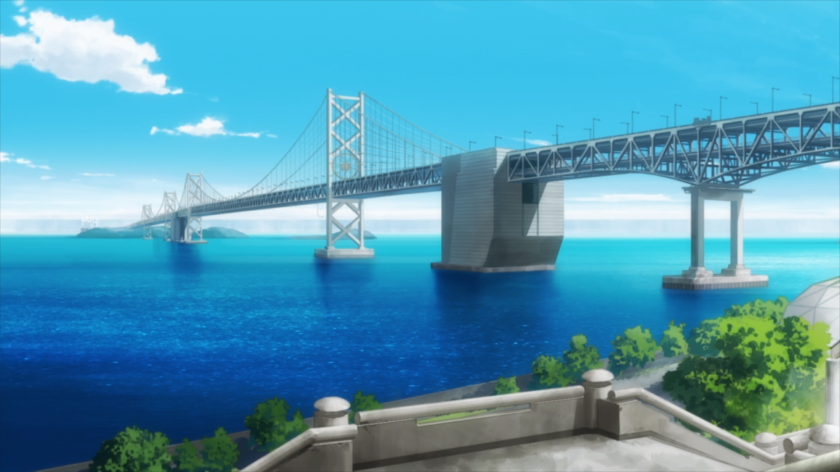 Seeing the Long Bridge intact was eerie – in the original series it’s a ruin.  We already know this generation of heroes faces a Final Battle.  I think we now know where that battle will occur.  I think that’s going to be the hardest part of the next few weeks…  I’m already growing to like these girls, but I also know what happens to them.

Also, as suggested reading, WordPress served up this interesting review of the first season.

Verdict:  If you know me, you don’t have to even ask – Keeper.

This will be the final first impressions post this season.  I’ll pick up with a short entry Wednesday with the stragglers and the first of the second episodes.

Premieres remaining: Wake Up Girls (later today), Inuyashiki, My Girlfriend is a Shobitch (both on Thurs), Robomasters (Fri) , March Comes in like a Lion (Sat).

I’m going to have to seriously think about how I’m going cover shows this season, there’s going to be too many for much depth on all of them.  This week is a kind of experiment in that direction – fast takes for most shows, longer/deeper where warranted.  This worked pretty good in the Winter/Spring 2017 seasons, but somehow I got away from that.

I still haven’t figured out where Worth Reading will shift to, but I’m guessing Friday.

So, drop me a line and tell me what you think of the new season so far!