For my vote…  this short sequence was probably one of the best , if not the best, all week.  Well, maybe other than basically the entirety of this week’s episode of 3-gatsu no Lion.

Anyhow, hit the jump and let’s run down what I think of this week’s new crop of episodes!

I didn’t know quite what to expect now that they’re finally in Antarctica…  But I’m pretty sure this wasn’t quite it.  Which isn’t a complaint mind you, it was a pretty good ep.

The plot thread about the work involved in getting the base cleaned up and functional was good if a bit preachy in spots.  Yumiko explaining the importance of events and celebrations to the expedition really hit home…  Because it’s so true.   As you’ll recall, I’ve BTDT during my career as a submariner in the USN…  Trust me, they really nailed it. I loved seeing Shirase with her mask off…  She can be such a goofball.  Also interesting is how Hinata has taken on the role of leader of sorts.  She definitely keeps her eye on their job (as Youtubers) more than the others, including (to my surprise) Yuzuki who you would expect to be more professional than she acts.

On the other hand…  One thing this ep showed is just how far out into uncharted waters Yuzuki is.  Hinata may be leading because Yuzuki’s mother isn’t there taking the active and directing role.  And that lack of active supervision, and the sudden isolation of having her own room, brings an old fear back to the surface…  She’s never had any friends or long-term contacts, and has no idea how friendship works.  She literally can’t read the signals because they’re a foreign language.  She’s used to structure and formally defined relationships and has no idea how to handle unstructured intimacy. Kimari is the hero of this storyline…  She may not have Shirase’s drive or Hinata’s practicality (and she can be a bit dense sometimes) but her superpower is her empathy and willingness to reach out and befriend.  More than anything else, this ability is the true strength of the team.  Once again, she reaches out and brings Yuzuki into the fold with her plan for a surprise belated birthday party.  And I think, this time, Yuzuki finally believes.

I..  don’t know quite what to say about this episode.  Once again they had a cliffhanger of sorts and once again it was virtually meaningless.  The screen time devoted to the witches and the coven was more or less a waste of the viewers time.  The middle part, an extended interlude without dialog of Chise and Elias going their separate ways on mysterious errands was frustrating.

And did we really need yet another indication of Elias’ inhumanity?  He loves Chise – not so much as person, but as “someone who looks to him”…  But doesn’t grasp that his chosen course is ultimately inhuman and in her eyes practically the blackest of sins.

I’m not quite sure what to think about this ep…  The core of the plot was once again Matsuri being a world-class bitch and manipulating Yuzuko and Mei.   But finally both of them see through her shit and reject her. (And she departs with a villainous “you haven’t seen the last of me!”)  Dat ending though…  Mei finally throwing caution to the wind and indicating her willingness to commit and asking if Yuzuko is ready to make that leap too.

Even if they are, it won’t last.  As trashy as it is, this is an ongoing manga series and as such it can’t let the protagonists get too close for too long.  Like all soap operas it depends on never quite reaching that climax.

At Therefore It Is, Zeroreq011 writes Citrus: Class S and Incest – examining how Citrus fits in with older, proto-yuri, genre.

In the past, I used to link to a lot of different bloggers for their insights… and somehow I’ve gotten away from that.  I’m going to make a conscious effort to get back to doing that.  Mine isn’t the only viewpoint.

This week they swung the focus back onto the diminutive monsters, and the episode was much better for it.  I’d have enjoyed more time with some of the more… unusual critters in the shrine forest (like the unicorn with stars on its butt), but I was happy to see the lack of humans. 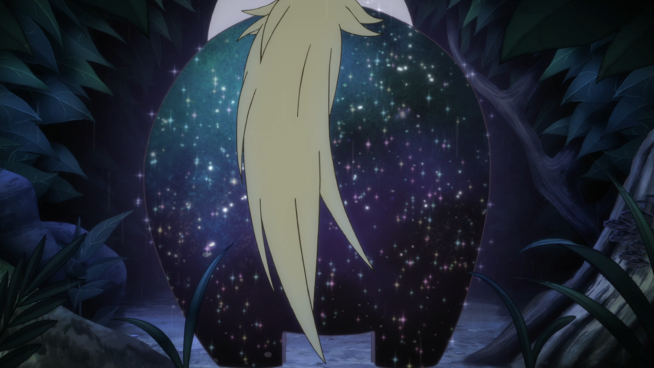 Honestly, now three episodes behind and having no interest or motivation in catching up…  It’s past time to make it official.   Dropped at 6 episodes.

I didn’t know what to expect coming back from hiatus… March has always zigged and zagged a bit, but here in the second cour it’s been especially noticeable.  It might be heresy to say so, but I think it’s a better show for doing so.  Not just for humanizing the other Shogi players but for the glimpses into human nature they’ve provided.

At the end of the last cour we got an extended look in Shimada’s head, and this week we got a look into his opponents…  And it’s not a very happy place.  (In the show’s universe, few people outside of Momo-chan seem to be happy for any length of time.)  From Yanagihara’s point of view, shogi has become an inexorable struggle.  He’s weighed down both by the obligations laid on him by his peers and by his own definition of himself as “the man who is the Kishou Championship”.  But even knowing this he can’t picture a life without shogi.  And so, each day, he goes through the medical routines that keeps him alive and wearily steps once more into the ring. The use of the imagery of a rice field burned over after harvest was particularly striking… it refers to a rice field that has been burnt after harvest. It ties in with how he self identifies as “the man who is the Kishou Championship”.  Once that is taken from him (the rice harvested), he’ll be a barren burned field – abandoned to the winter.

Though it was more subtle, as an episode it was every bit as emotionally raw and brutal as any during Hinata’s arc.  During the flashback sequence, I could almost feel the weight of those obligations and advancing age settling on my shoulders.

It’s almost as if they said “we saved up all the emotion we’d have normally spent over the hiatus – and here it is all once”.  March truly did come in like a lion this week.

This also means, that (IIRC) this is the first match we’ve gone into where the audience has been inside the heads of both participants.  (Plus those of Rei and Nikaidou in their role as match commentators.)  I’m curious to see where they go and what they do with this… crossing fingers.

A rather slow burn match with the Russian team (whose Soviet era uniforms and mannerisms have gotten a bit old), saved at the last moment by Hazuki/Cinderella’s ability to control “rewrite” magic…  Of interest, some kind of Witch’s Council supervising the matches, and they seem to have it in for Hazuki and utter disregard for tradition.  And once again, the Headmaster bullies and pleads in Hazuki’s favor.  I still don’t know what her angle is, she’s still a bit of a mystery. 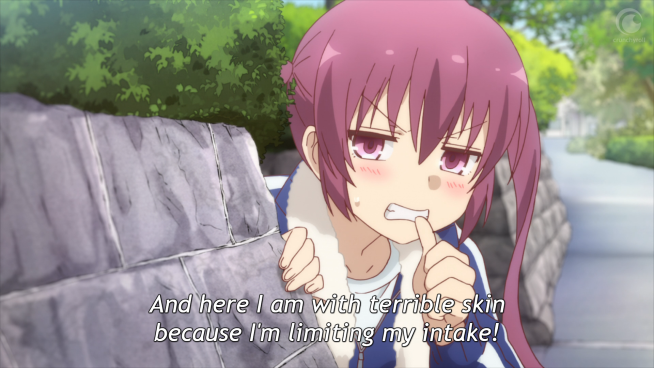 Her rivalry with Misa (which exists completely inside Misa’s head) is used to good comedic effect.

Blink  Blink  What in the h*ll was that?  Who thought that dropping a fanservice and sexual innuendo laden episode into the middle of a CGDCT series was a good idea?  In an eyeblink, Slow Start has gone from a middle-of-the-road keeper to verging on the edge of the drop zone.  Not for the fanservice, anyone who has followed me for any length of time knows I don’t object to fanservice per se…  But the sudden and jarring shift in tone.

The first part of the episode was a delight…  They’ve long since established Rin and Nadeshiko’s easy companionship via text message, and this episode took that and ran with it.  Equally delightful was the return of Rin’s internal monologue.  However, as with Aoi and Chiaki’s segment last week, Nadeshiko and Chiaki’s seemed to struggle a bit.  It’s seems somewhat late to spend so much time characterizing Chiaki as earnest and well-meaning but struggling when intention meets the real world.  And doesn’t Aoi deserve some screen time in her own right?  AFAIK, Camp will be twelve eps so it’s getting a bit late in the season.  And if we don’t get the whole all-five-girls camping sequence foretold in the first ep, I’m gonna throw things. On the other hand…  The Nadeshiko / Chiaki part once again put Camp over the top as this season’s premiere food show.

I took at look at the manga the other day, and the first ep seemed to correspond to the first chapter…  Should skip ahead and check out whether that holds true for eps 8 and 9, because both of them feel like two chapters compressed into a single episode.

And there you have it!  What did you think of this week?  Drop a comment and let’s chat.