Yamato finally reaches Iscandar… But is it really over? Hit the jump and find out! 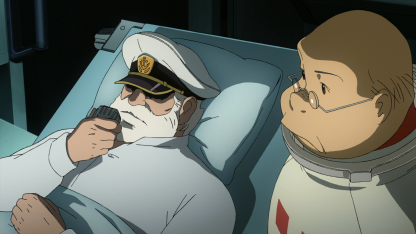 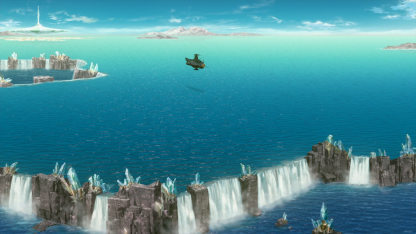 After Captain Okita thanks the crew from his sickbed, we’re treated to a long silent series of shots of the crew looking out on Iscandar and of Yamato traversing the landscape of the beautiful planet.

The silence is emphasized when Yamato docks…  and they’re greeting and escorted through a silent city by androids.  Where are all the Iscandarians? 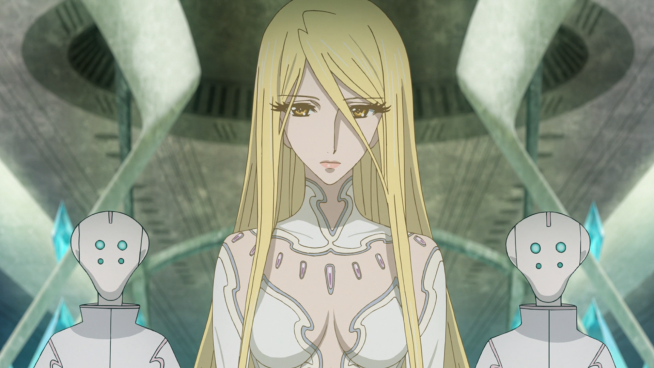 Finally – the moment of truth.  Yamato‘s crew meets Starsha of Iscander.  But she refuses to give them the Cosmo Reverser because they’ve used the Wave Motion engine as a weapon of destruction. 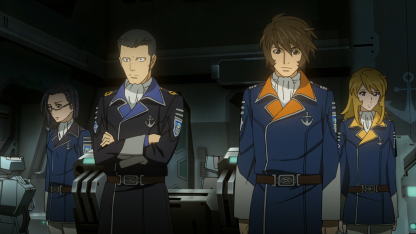 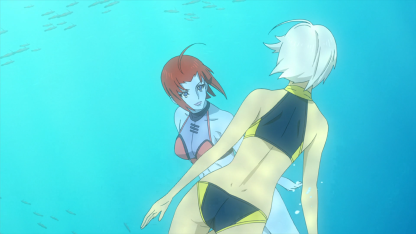 The crew is initially downcast…  But Medic Harada makes a suggestion – that the crew take this chance to relax.  (And the show takes a chance to indulge in some fanservice.)  My favorite part is long sequence between Yamamoto and Melde that starts with a diving competition and ends with them reconciled.  I think each of them recognizes something of themselves in the other, and realizes the war between them (and by extension between their people) is over. 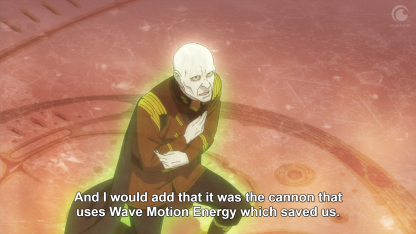 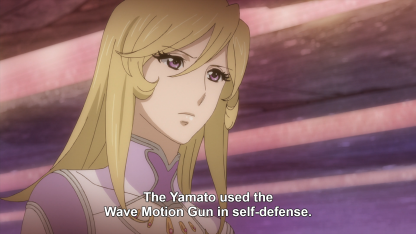 Both the Gamilas and Yurisha plead the Terran’s case – emphasizing that they used Wave Motion Energy not for conquest or wanton destruction…  But only in defense of themselves and others. 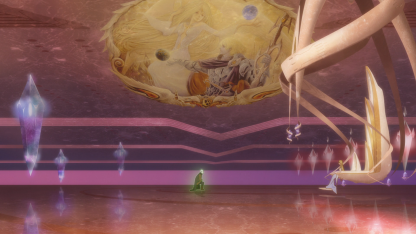 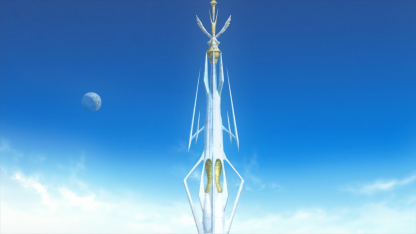 And we also learn more of the connection between Gamilas and Iscandar…  There’s a mural in Starsha’s throne room identical to the one in Dessler’s.  When Starsha and Dessler are shown together – she’s surrounded by birds identical to the one Dessler killed a few episodes back.  Even the architecture of the their palaces is similar.

And we also learn the origin of Dessler’s war of conquest and final madness…  Starsha desires peace, and he will provide it under the iron fist of Gamilas of domination.  It’s left unsaid, but I believe that’s why she’s helping the Terrans.  That “peace” horrifies her.  Dessler saw this as a betrayal of his love, and snapped. 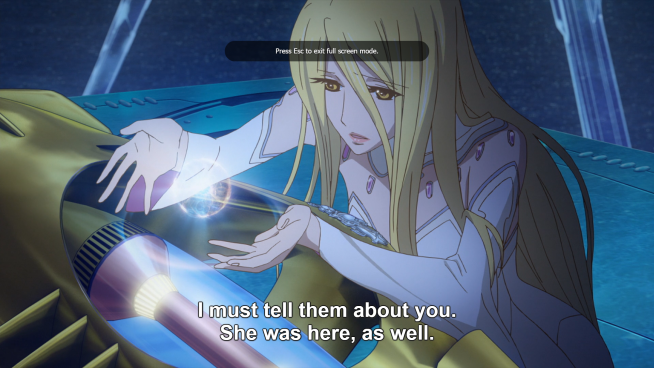 Starsha holds a one sided conversation…  with who?  She fears she will never see whoever it is again if she gives the Cosmo Reverser to the Terrans. 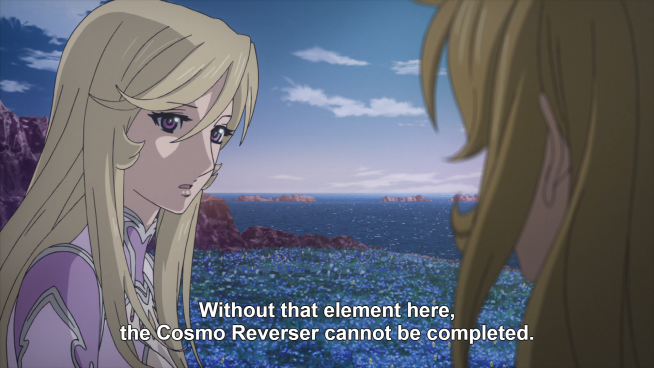 And Yurisha reveals why the Yamato had to come to Iscandar…  The Cosmo Reverser must be bound with an element that contains the memories of Earth in order to be able to restore the Earth. 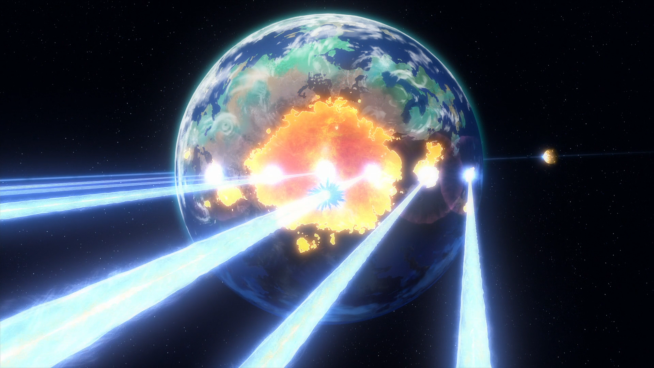 Starsho decides to give the Cosmo Reverser to the Terrans – and explains the source of their fear of the Wave Motion Gun and the origins of Icandarian pacifism.  Like the Gamilas they too once waged a war of conquest, powered by the vast destructive powers of Wave Motion Energy. Starsha then take Kodai to a graveyard where Iscandar’s people sleep – and where his brother is buried.  She explains he arrived on Iscandar when a Gamilas prisoner transport crashed…  And that he died despite her efforts to save him.

It’s never said, but I believe it was Mamoru Starsha was speaking to – and whose memories form the core of the Cosmo Reverser. 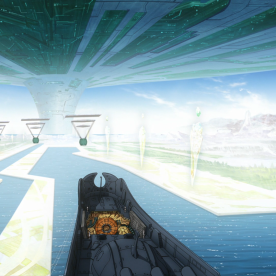 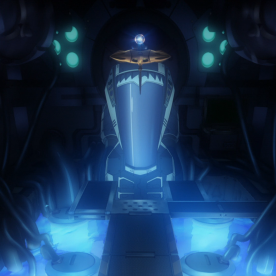 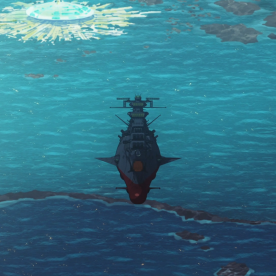 Yamato herself has been rebuilt to carry the Cosmo Reverser – and sets out to return to Earth. 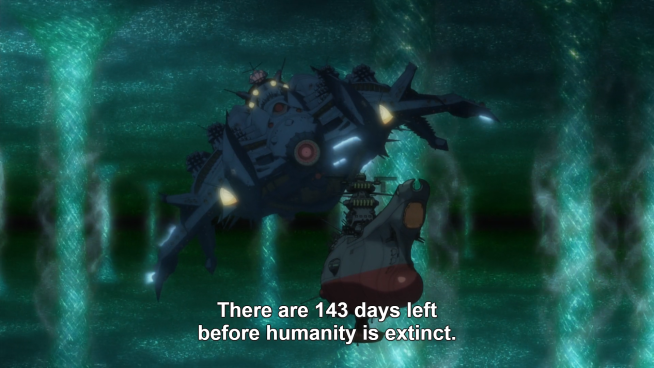 But her perils are not over…  she still has to make it home before the deadline.
Yamato 2199 group watch:
Other Participants: