Busy, busy week at shows set up for the final arcs and penultimate episodes!  Hinata and Aoi reconcile, Harakuna gets amped up, and Hanebado is…  well, once again Hanebado.

All that and more after the jump!
The shows that I am watching are in bold, shows my wife and I are watching together are in bold italics, and  marks dropped shows.

Is it just me…  Or did that victory feel just a little unearned?  From desperate worries and plans to Titan guts splattered about the landscape all in the span of a single episode.  I understand that they’re picking up the pacing this season because the political stuff is boooooring!  But I think they could have spent a little more time here.  Yes, I’ve seen the argument that this displays how skilled they’ve become.  I counter that with the immense  strength and threat they built up the Reiss Titan to be.

Not the best episode ever…  Very preachy (that is, way too much Narrator) and they just couldn’t resist yet another “fighting the infection” plotline.  Still, plenty of Platelet fanservice so it wasn’t all bad.

Seriously, CGDCT/moe spinoff based on the Platelets – when?

Chio’s has settled into what can be best described as comfortable mediocrity.  Nothing really wrong with that per se…  It just hasn’t been as consistently funny as it was early on.  That being said, I laughed my _ss off during the first segment.  The series is at its absolute best when it gets inside the insanity that lives in Chio’s head.

And the conflict between Aoi and Hinata is resolved – not with a bang, but with an old joke shared between close friends.  Aoi’s staunch insistence on standing by her friend rather than continuing the climb broke the logjam in Hinata’s feelings and they were finally able to talk it out.  Perfect. 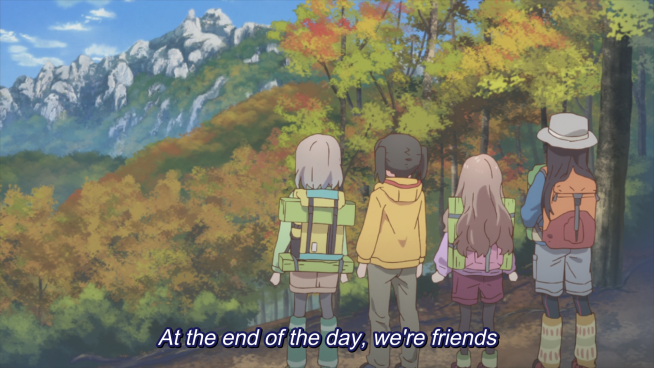 I kept waiting for Aoi to make a reference to the incident on Mt Fuji, and I’m glad she didn’t.  This isn’t paybacks, it’s about what friends do for each other.

The girls sleeping on the long train ride home…  Priceless.  Who want to bet that right out of the frame, Aoi and Hinata are holding hands?  They don’t have to show us.  We know.

I went back and checked the manga, and yep, they’re skipping stuff.  They kept all but a couple of Cakey’s best lines/bits – and the ones they skipped don’t matter except in the unlikely chance that Grand Blue Dreaming gets a third season.  Have I mentioned how much I love Cakey?  She’s the only sane one in the bunch and it’s funny watching her try to maintain her balance (and sanity) in and amongst the madness of PAB. 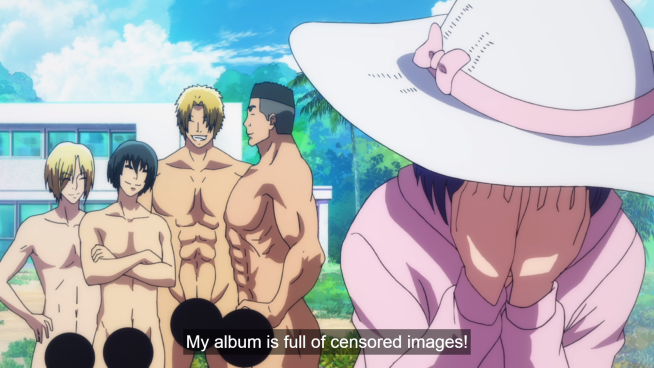 They also cut the funniest part of Iori bunking with Nanaka and Azusa, but then they trimmed all the groundwork laid in previous chapters.  (tl;dr version: Azusa has the hots for Nanaka, part of the reason he bunked with them was to “protect” Nanaka.)

From the preview, they are going to hit the pool scene – my absolute favorite bit from the Okinawa arc.

This is only the second time I’ve watched an anime where I was familiar with the source…  And it’s been a very different experience from watching Sweetness & Lightning in that respect.  Dreaming is a serial, and they had to trim to fit chapters into episodes and to fit the whole thing into a single cour while also reaching a natural stopping point.  Sweetness on the other hand was episodic and they could and did skip about to maintain the pace of the series without worrying quite so much about adaptation issues.

Once again Hanebado demonstrates its amazing skill at spending two-thirds of an episode either on complete irrelevancies or going back over well covered ground.  That match though…  When it gets to actually playing, it seriously, seriously delivers.

If the series matched the quality of it’s musical cues…  we’d be having a very different conversation.

Some folks are saying this isn’t “actually” a sports anime…  And really, I dunno.  It certainly works as one for me – I mean the whole darn show is about girls participating in a sport isn’t it?  No, it’s not fifty eps long.  Nor does it go into obsessive detail about things.  But it strikes me that neither is central to any kind of useful definition of a genre.

Either way, this was a damn fine episode.  I spent a good part of it practically leaning forward in my seat anticipating what might come next.  They did a good job modulating the tension with flashbacks and turning the camera on the folks watching the match.  I enjoyed the heck out of it.

Not sure I understand what all the fuss is about – Bakugou sure is a puzzle sometimes.  But, All Might was happy and pretty much every review I’ve read was pleased, so whatever.

Once again Uori is being a self-centered so-and-so, and once again all is forgiven and the other girls welcome her back with open arms.  Sigh.  This is a well-worn trope in anime that feature any kind of group of people and not one I enjoy when done so badly.

Which inspired this thought:

Just once I'd like an idol anime to be honest. "You know what? You're right. You're self centered and clueless and we're tired of it. Pack your sh*t and GTFO!"

It’s never going to happen, but I can dream can’t I?

Well, there you have it!  Another week in the books.

It’s been nice this week, the heat has finally broken which means I can cook again…  Had some lovely chicken curry rice last night, and am thinking of making up a big pot of veggie soup this weekend.  OTOH, Hisone to Masotan (Dragon Pilot) drops on Netflix tomorrow so I might want to pick something that doesn’t take quite so much attention.  (I’m currently thinking of marathoning it on Sat.)

Next week’s entry may be shorter than usual because we’re taking off early Wens afternoon to drive over to the Big City to catch My Hero Academia: Two Heroes.

Anyhow, how did your week go?  Drop a comment and let’s chat!