And now it’s the post you’ve all been waiting for!  Time to run down the first batch of new shows and try to sift the gold from the mud.  And honestly, so far, it’s hard work as there really isn’t much to work with.  We’ve got far too many isekai, and far too little originality.

Anyhow, hit the jump and let’s run ’em down!

Stop me if you’ve seen this before…  Cute introvert meets genki extrovert and learns to come out of her shell.  What?  You didn’t stop me?  You must have only started watching anime yesterday… OK, excessive snark aside, after all is said and done there’s just not much more (so far) to Houkago Saikoro.  It really is the distillation of any number of previous shows, stock characters and all.

Status:  Uncertain.  Most likely keeper due to it’s unusual hook (board games).  Also, because I have weak spots for CGDCT and school club shows and this hits both quite squarely.

Ascendance has a great concept, but so far it’s boring.  This episode took some awfully thin material, and then stretched it out until it practically broke.  Myne’s ongoing self pity didn’t help matters much…  But maybe, with her newfound purpose, that’s going to change.

Not at all what I expected, as it’s basic story is quite different from the first series…  Still, who can’t help but be charmed by the Bananya kittens?  Certainly not me! 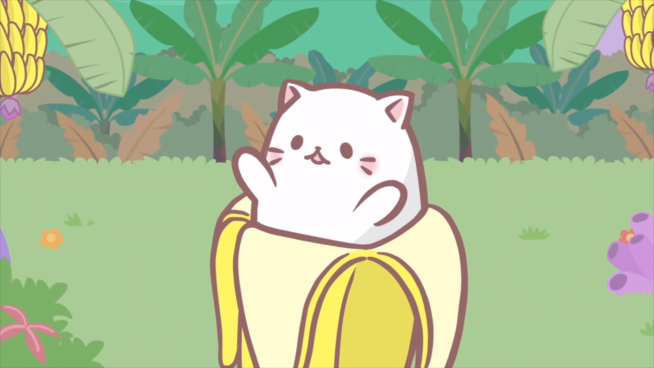 Ristarte is far and away the star of the show…  Telling the story from the point of view of the supervising goddess was an inspired choice.  Toyosaki Aki is doing a superlative job of performing the various voices, noises, and reactions demanded of her character.  (I rarely mention VA’s, and that’s something I need to rectify.)  In the same vein, the animation staff is doing a bang up job of providing the visuals.

Notice how I haven’t mentioned the titular hero?  There’s a reason for that.  He’s tedious, drab, and BORING.  Practically the definition of a one-trick-pony.  He doesn’t deserve much more than a brief dismissal…

And that’s a Problem with a capital P.  Even the funniest comedian can’t make a routine work unless the straight man ups his game and gives the funny girl something to work with.

Status: Even though it’s standing on the edge of the drop zone, I haven’t kicked it over the side – yet.

Ok, I have to admit I chuckled through the whole episode…  For the most part, it was right on it’s game and had great comedic timing.  But, like Cautious Hero, so far it’s a one-trick-pony.  Kemono Michi is by the same author as Konsuba, and he got away with one-trick-ponies because he had a whole cast of ponies to mix and match each episode.  Unless Kemono follows the same route (and soon!), it’ll quickly become stale.

Oresuki has premiered, but I haven’t had a chance to check it out yet.  Other than that, I’m caught up with everything that’s premiered through Thursday PST (GMT -8).  Feel free to comment on anything I haven’t mentioned.  I depend on y’all to help me find the diamonds I miss.

So, feel free to drop me a comment and let’s chat!