The second and final batch of first impressions…  It’s a lean season folks, but we’ll make the best of it.

Let’s hit the jump and dive right in!

And that’s without the usual problem of mobile game adaptations…  There’s a huge cast, and they spent a good chunk of the episode introducing them.  The other usual problem, that they assume the viewer is familiar with the game mechanics, is thankfully absent.  (So far.)

Status:  Even my well known soft spot for cute anime girls can’t quite make me like or enjoy Azur Lane…  I’m not entirely certain why I haven’t already dropped this hot mess.

This has to be one of the oddest first episodes I’ve ever watched.

As expected, it picked up with the cliffhanger than ended the first season…  And then preceded to wrap up the threads of the competition.  Thematically, it felt more like a finale/epilogue than a first episode.  You could argue that in a continuing series the two are one-and-the same…  But usually the mid-season/arc climax is attached to the previous season, not the new.

Status: Why am I even watching this?  The first season was so annoying… Oh, yeah, despite being something of a mess, they do manage to hit some pretty sharp emotional high points.  Stand by for another season of alternating praise and despair.

ORESUKI: Are you the only one who loves me? /
Ore wo Suki na no wa Omae Dake ka yo Ep 1 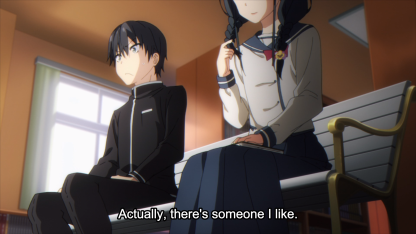 I find myself annoyed and intrigued…

First up, the annoyance.  The entire episode was essentially three repeated skits, with changes in the third.  That was a massive waste of the viewers time.

Yet, there’s more here than that.  The setup left us unprepared for the massive face-heel turn, even though there was a hint or two…  (Though I have to say, I’m usually not fond of “everything you thought you knew was wrong”.)  That leaves me intrigued.

On the balance, I think I’m more intrigued than anything else.  Will Kisaragi get the comeuppance he deserves for being a manipulative ass?  Will he embrace his dark side?  I’m looking forward to finding out.

I have to say…  Outburst Dreamer Boys has the best OP I’ve seen so far.  The first episode is probably the best so this season.  It’s fast paced, aggressively silly, and absolutely true to itself.  I love shows that embrace their inner nature with no apologies.

Mizuki is the mystery here…  My theory?  She’s a chuuni too, but she desperately wants to hide it.  With the madness of the boys around her she’s not going to be able to hide it for very long.  Will they play it like Seki-kun, where Rumi tried to keep a facade of disinterest and disgust?  Or will Mizuki burst from her shell and join wholeheartedly in the lunacy?

Though it doesn’t feel likely, there’s also a distant third possibility…  The Supernatural Battles route, where their powers and “The Agency” are real.

I’ve seen some debate over whether it’s a reverse harem or maybe a rom-com.  To me there’s no evidence either way, so I’m sitting that one out.

Also, my wife caught the last third and then watched the entire ep.  This started as a ‘me’ show, but now it’s a ‘we’ show.

Sidebar:  Getting back to taking screenshots after such a long break…  I’m reminded just how crappy the Funi and HiDive web interfaces are.  And it’s not just about screenshots, their navigation sucks rocks as well.

There’s still two big premiers yet to come…  (My Hero Academia, and Chihayafuru.) But those are a while off yet.  I haven’t built a schedule yet, so I don’t know when I’ll be posting.  I wouldn’t be surprised if I end up skipping the rest of this week and pick
up with weekly coverage sometime next week.

With the hiatus last season, I never got to summer’s Looking Back, so there’s that to look forward to as well.

Pretty much everything so far that I expect to watch has now premiered, so everything is fair game.  Are there shows I’m missing that I should take a look at?  Drop a comment and let’s chat!