I don’t know why I haven’t answered the many times I’ve been tagged before…  some silly reason or another.  But I felt like writing, and two bloggers have recently tagged me, so I decided to stop being silly.

Anyhow, you know the drill, hit the jump and read my answers to the questions asked of me!

The post title comes not just from the award, but also from song from my distant childhood…  That being said, let’s dive into the meat of the matter…

The first set of questions are thanks to Kieko‘s nomination.  Thank you Kieko!

Is there an anime you’ve always wanted to watch but have yet to?

I’d post a screenshot of my Crunchyroll queue, but it would just be embarrassing.  And then there’s my Netflix, Amazon Prime, HiDive, and Funimation queues to consider….

I guess my highest priority right now should be My Teen Romantic Comedy SNAFU.  I’ve heard many good things about it over the years, and there’s a third season coming next year.  (For that matter, there’s a bumper crop of sequels coming next year.)

What genre of anime have you not tried out yet? Why?

That would be…  supernatural/horror.  (As opposed the existential/horror like Promised Neverland.)  As a general rule I don’t like supernatural stories, and I can take horror or leave it…  Mostly because it just leaves me cold.

Is there an anime ending that frustrated you? If so, which one?

There’s an absolute ton of them over the years!  I hate inconclusive endings, and I don’t care much for “and our battle goes on” endings.  Very few of the latter are well done, and all too often just feel like they’ve just run out of time.

The most recent most annoying one would probably be Granbelm – not only inconclusive, but a pointless cliffhanger to boot.  Pointless because there’s no obvious story left to be told, and thus there’s unlikely to be a second season.

Kind of a hard question to answer.  The term OP is used interchangeably to mean the actual animated OP, and to refer to the OP song.  (Since I use the latter, that’s how I’m gonna roll…)  Also hard to answer because there’s so many I love.

Which shouldn’t surprise anyone because my love for Yorimoi (second only to my love for Euph) is pretty well known.

As a bonus answer…

My favorite ED, and one of the very few ED’s I actually watched each week.  Usually, I just fast forward to the end and any “next episode” information.  (Or potential post credits scenes – I always look for those.)

You can see more of my taste in anime music in my Anime Playlist and Favorite OP Bingo posts.

Which three anime characters would be the worst to get stuck in an elevator with?

What do you enjoy the most about blogging?

Responding to comments, and taking part in discussions in the comments.

The general rule on the internet is "never read the comments". In the world of anime blogging – nothing could be a bigger mistake. Quite often the comments contain surprising viewpoints or subtle perceptions.

Always read, and reply to, the comments!

Do you plan your posts or are they more spontaneous?

Yes.  That is, I do both depending on my mood and the nature of the post.

Do you have a notebook dedicated to jotting down blog post ideas? (I find it quite helpful to have one)

I don’t have a notebook per se, but I do have a ton of drafts of works in progress.  I really should have a notebook for stuff that hasn’t progressed to being a draft yet.  And I do have three steno pads less than six inches from my fingers…

What’s your favourite season? Why? 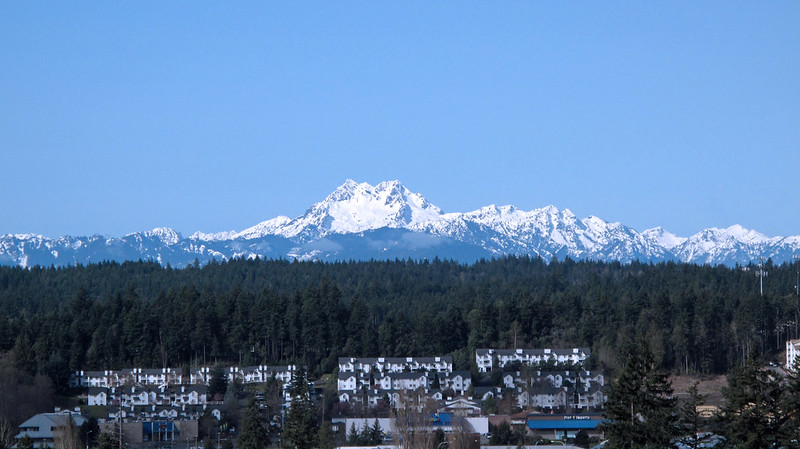 Honestly, except for the hottest days of summer, think pretty much every season has something to recommend itself.  I’m not too fond of the coldest, dreariest, days of the Pacific Northwet’s long winter rainy season…  But on the days the sun is out, the mountains on the horizon are snow covered and awesome.  The picture above was taken off the side of the road while I was driving to the grocery store.

Are you a coffee or a tea person?

As far as hot beverages go, coffee hands down.  I do love me some sweet tea though.

What’s your favourite type of food?

I’d say that Japanese is my favorite cuisine…  But BBQ is by far my favorite type of food.

The second set of questions are thanks to Merlin‘s nomination.  Thank you Merlin!

Who is your favorite celebrity crush, real or fictitious? By all means, include a picture. 😉

What would your Patronus/spirit animal be?

Not a huge Harry Potter fan, and…  not something I’ve ever really thought about.  Gonna take a pass on this one.

If you suddenly had superpowers, what would they be (you can pick up to three of them) and what would be a practical day job to use them in?

I’ve always thought that being able to control someone’s emotions would be the ultimate superpower…  As far as a day job goes, I could be a grief counselor, work in suicide prevention, or as some kind of therapist.  The idea isn’t a permanent alteration, but a temporary one as a form of relief, support, or assistance.

Be it the Shire or the Federation of Planets, storytellers tend to make up some society which is their ideal. Mine is an extended clan of half-demons who prioritize honor, compassion, freedom, and strength. What would yours be?

That’s a hard one to answer, especially given the stream-of-consciousness way I’m answering these questions.  Equality, equity, and opportunity would be key characteristics I’d build into my ideal society.

You are captain of a starship that has discovered a habitable planet. What did you name your ship, and what would you name this planet?

Assuming an independent vessel of my own?  Wanderer.  The name of the planet though would be more situational… depending if I’d run out of obvious ones and the characteristics of the planet.

You can visit three worlds from anime/books/TV/etc., for twenty-four hours each. Which ones do you visit and what do you do while there?

The Four Islands Archipelago (Aokana:Four Rythm Across the Blue),  I’d spend as much time as possible flying with grav shoes.  Maybe try a game of Flying Circus, but I’m not all that coordinated or much a sports type…  But I’d like to try.

I can’t really come up with a third that’s not more about the characters.  There’s any number of idol groups I’d love to see in concert though…

What is a book, comic/manga, or game you’d love to see in a cinematic form? Or the other way around, what is a movie, TV show, or cartoon/anime you’d love to read in written form?

I’ve long loved the movie Command Decision…  I’d love to see a version set in modern times, and with the theme of the moral ambiguity of the US’ recent conflicts woven into the narrative.  It would be a good fit I think.

What is your favorite color?

Your favorite supernatural creature is real. What is it, and can humanity coexist with it?

I don’t have a favorite supernatural creature…

What would love to get for Christmas, or a birthday?

I could just link to my Amazon wish list…  :)  But generally books or cooking utensils are my favorite.

My wife says she gives me cooking stuff out of enlightened self interest.  She’s often (jokingly) threatened to give me cookbooks from my list – with post it notes marking the recipes she wants me to try.

What are your most and least favorite parts about blogging?

Most?  As I said above, talking and debating in the comment section would be my favorite.  The actual process of writing would be my least, as it does not come naturally to me.

Yeah, the last question is kinda lame…  But I’m running short of time today so I kinda punted.  Sorry.

My nominations (in no particular order):

28 thoughts on “A Bright Sunshiny Day! The Sunshine Blogger Award”