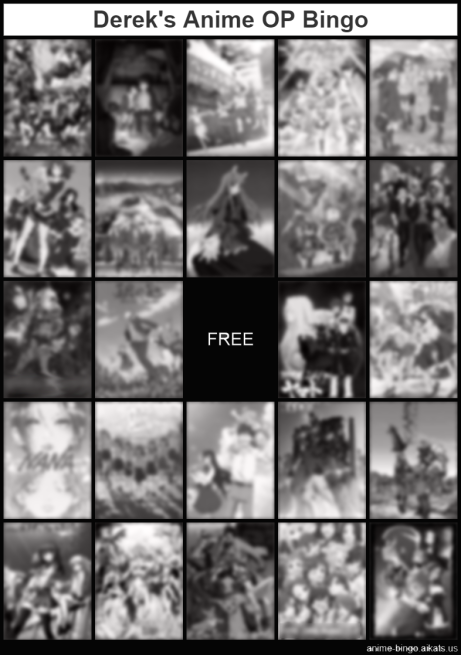 This should be fun and different!  A little while back, there was a thing going around on Twitter about making a Bingo card with your favorite anime theme songs…  And I’ve decided to turn it into a bit of a contest here at the Lounge.

Hit the jump, read about the contest and see what you could win!

So, here’s how it works:  I’ve taken the images for twenty four of my favorite anime OP songs, and put them on a Bingo grid.  To make things a bit more fun, I’ve made them black and white, and blurred them.  Even more fun?  Some of these anime have more than one OP tune!

You get to try and get a Bingo by figuring out the anime and song.  (A Bingo is five across a row, down a column, or diagonally from any corner.)

Leave your guess in a comment using standard bingo notation.  (I’ll leave you on your own honor to not read anyone else’s guesses before leaving your own.)  You can guess as many songs as you like, but only one Bingo guess per person and it must be explicitly stated. (For example: B1= Cyborg 009 “What’s the Justice?”, I2= Promised Neverland “Touch Off”, N3= Free Space, G4= Flip Flappers “Serendipity”, O5= Girls Last Tour “Ugoku Ugoku”.)

Comments on this post will be locked next Monday prior to posting the first batch of reveals, so don’t dawdle in getting your guesses in!

Every Monday for the next five weeks, I’ll reveal five squares – and we’ll see who got it right (or who got it spectacularly wrong).  Will anyone have a Bingo?  If nobody has a Bingo, I’ll see who got four right, then three (if needed), etc…  Someone will win, it could be you!

In the event of a tie,  I’ll make a random selection between those persons making a correct guess.

The prize is three months premium subscription to Crunchyroll, paid via a Crunchyroll digital gift card.  (Please read Crunchyroll’s terms & conditions for the card.)  And we all win from one point of view, five weeks of talking about anime theme songs!

Be sure and check out the other parts to this series: