Hit the jump and let’s travel back in time to Summer 2015!

I did some research, but this is written mostly from memory…  My original comments can be found in the comments section of Top Summer 2015 Anime: Final Ratings at Mage in a Barrel.

Special award; Silver Raspberry for the show that most wasted it’s initial premise.

I can’t say much today that I didn’t say back then…  I love the heck out of the OP (it’s in my anime playlist) but other than that the show had no lasting value.  I’ve never rewatched even a minute.

This would be Studio Manglobe’s final production, as it filed for bankruptcy just a few weeks after the end of the season.

Not bad, not great, but not bad. Decent enough characterization (even if trope heavy, and with the MC being a Gary Stu), and decent animation… but in the end, not as good as it could have been. Like so many shows this season, it could not decide what it wanted to be – an action drama or a political drama. Whatever it turned it’s attention to was handled well, but the whipsawing tone got to be a bit wearying.

Special Award; The character most otaku will want to see cosplayed (Rory Mercury).

I’ve rewatched Ep 6 (“Ride of the Valkyries”) quite a few times, because it’s cool.  And because the scene with Rory and Kurabayashi fighting back-to-back is really cool.

The protagonists go up against a dragon, and produce one of the best lines of the entire series…  (It’s a nod to the kaiju genre, best known in the West for the long running Godzilla franchise.)

Final rating: 3.0 Decent enough, but mostly an extended setup for the second cour.

That the show ended abruptly with episode 11 is emblematic of it’s problems… the set up a premise, but then just didn’t know where to go with it. Several of the individual episodes were quite good (others not so much), but they never quite managed to string together a coherent story arc. Any of the four main threads could have made a decent short format season on their own, but taken together there just wasn’t enough time to do all of them credit.

Remember how I’ve always said I’m mostly writing this from memory?  Well, I don’t remember a darned thing about this series other than it had to do with idols and idol culture.  I think that says it all.

Outstanding – until the last couple of episodes. I loved the concept of building each episode around a central pun or joke, and was amazed they managed to pull it off week after week. The last couple of weeks were a bit of a fizzle though, as they started to take the ‘plot’ too seriously and left off the laughs.

Not much to say that I didn’t say then…  Though Miss Monochrome was hit or miss sometimes, I’d still watch another season.

Wow… it’s hard to believe twenty four episodes have gone by. In some ways, it’s been wearying due to the sheer weight of numnbers. In others, energizing because they so neatly lampshaded so many of the tropes endemic to the rom-com genre. (Though OreMono flirted as much with drama as with comedy, so simply calling it a rom-com does it a disservice.) Overall, a good series that I’m glad I watched, one of the few bright spots this season.

Previously reviewed in the Spring 2015 Looking Back.

I really don’t know what to say for a season review… after week after week of heaping on the superlatives, the well has run dry.  This emphatically isn’t damming with faint praise, I truly just can’t think of anything more to say.   I’d almost go so far as to say this was THE shining light of the season.

Oddly enough for a show I’ve never rewatched…  I still recommend it highly as practically the purest distillation of Slice Of Life that I’ve ever seen.  From what I’ve heard, K-On! fans may want to dispute that, but whatever.

Never rewatched the show, but I’ve rewatched this scene plenty of times…  I just love it to pieces.

Sigh I really wanted to like this show more than I did in the end. It kept my attention week to week… but in the end it was just wearying. Despite a decent concept and some good lines and good scenes, the endless exposition and monologing and the glacially slow pacing pulls it down. The final nail in the coffin was the increasingly self aware game world intrusions.

When the second season aired in 2018, I wasn’t even tempted to watch it.  If Summer 2015 had a show I’d love to travel back in time and tell myself to skip…  It would be Overlord.  Yes, I know that I rated Gangsta even lower, but at least it had interesting characters and cool fights.

No, that’s not the OP (which I enjoyed and watched every week).  It’s a thoroughly charming insert song from Episode 8.

Though the individual episodes were a bit formulaic (character has a fear or a mental block, famous and experienced seiyuu shows up and dispenses the wisdom needed to get past it), overall the show was actually pretty good. Though not nearly as good as Shirobako, it also gives us a peek behind the curtain and does a decent job of it.

I rewatched this within the last year or so, and the second time around it seemed more agreeable and likable.  Familiarity breeds…  enjoyment?  Or maybe it’s my increased focus on characterization, which is one of Sore ga Seiyuu!‘s great strengths.

I’d recommend giving this one a watch for it’s rare combination of idol, workplace comedy-drama, SOL, and CGDCT.

Snow White with the Red Hair / Akagami no Shirayuki-hime

Season review; I really struggled to rank this show. I enjoyed it after a bit of trepidation at the start, but… there’s just something I can’t put my finger on. There’s certainly a lot to enjoy, especially in the animation and the characters, but it just seems to be lacking something overall. Too many episodes centering around Shirayuki and her (often over)competence would be my main complaint. It’s good that they didn’t go with the overused trope of the girl having to be constantly rescued, but the pendulum can swing too far the other way. The real strength of the series was it’s character development, with the aforementioned flaws in Shirayuki’s character. She was simply too good. 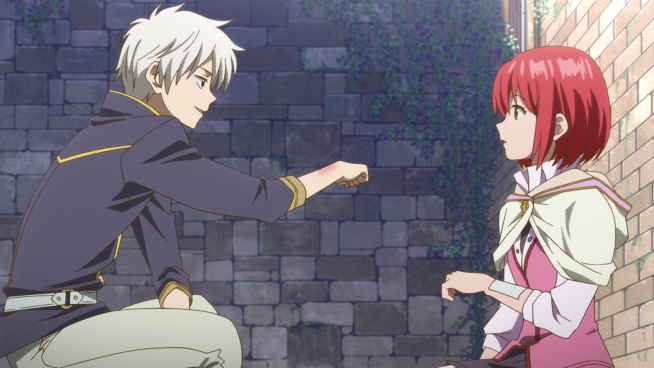 As time has passed, my main thought about this show is an increased appreciation for Obi and the changes in his relationship with Prince Zen mirror Zen’s character growth.  He ended up being featured in Adventuring with anime characters! and a conversation with Karandi inspired her Top 5 Obi Moments From Snow White With The Red Hair.

Hard to tell how much of that is this season, and how much is the second season…  The two run together in my mind.

I did try and rewatch recently, but it looks like I stopped after Ep 7.  I can’t even recall why.

Back then, I didn’t write a season review because a pair of (largely pointless IIRC) special eps delayed the finale.  What I mostly recall five years on is that the series had such promise, but then squandered it.  The biggest problem was that the cast was way too large and we spent too little time with any of them.  The few memorable characters mostly stood out for their tropish characteristics.  (The Sleepy One, the Hungry One, etc…)

Honestly, the season started out strong… it’s amazing how well they could take the same material they’ve covered before and still get us to watch and laugh. But as it swung into the second half, it got weaker as it departed from the slice-of–life format in favor of actual strong character progression and closing out character arcs.

S3 was… a bit of an odd duck.  The previous seasons had ongoing plot points, but was mostly episode focused.  This season was a little more arc focused and closed out many of the previous plot points.  So, it definitely wasn’t quite as enjoyable.

Final rating: 3.0 Good, but not great. The same as the preceding two seasons.  Never rewatched.

Pretty much your average CGDCT/moe short. Not sad I watched it, but there’s no value to be had in a re-watch either.

I can’t add much here because I honestly don’t remember much about the show or it’s characters.  Honestly, there’s nothing actually wrong with that…  as I’ve said many times, not every show is one for the ages.

Another show where I don’t really know what to say… week to week, it was just quietly excellent. It stuck to it’s basic premise and left me with a smile and a desire for more as the credits rolled. (This is especially surprising given the ludicrous simplicity of the premise.)

Usually I’m not a fan of one-trick ponies, but Wakako-zake defied that and spent the season among my “must watches”.      Ended up rewatching it last week…  Since it’s a short, it only took 45 minutes and that included watching the OP every time!

The anime short lead me to watch the live action on Crunchyroll, and I have rewatched parts of that series multiple times.  Crunchy only has the first two seasons (of the live action), and it’s a crying shame they haven’t licensed the remaining three.

So, click on that season chart, then drop a comment and share what shows you watched during the Summer 2015 season – what do you remember?  How have they held up?