With the insane go-go-go seven evenings in a row behind me, and despite Crunchy once again misbehaving on weekends, I’m mostly caught up.  This week, catching up on weekly series, some thoughts on March comes in like a Lion, a little bit about my non-anime hobbies and why I’m only caught up on shows my wife and I are watching…

So, fresh cup of coffee at hand and my animusic channel playing on Pandora, let’s get right into it.

3-gatsu no Lion  (Something of a series review.)

Well, it’s first in alphabetical order so might as well dive in…  I have to admit, despite how good it was I had a hard time sticking with Lion because it had some serious pacing problems early on.  (And long before I really grasped Nikaidō, I loathed the heck out of him.)  But, as Alton Brown says – “my patience was rewarded”.

You might think it a bit odd to headline a season review with a screenshot from the first episode…  But it really illustrates how far Rei has come in the last 22 episodes.  He’s no longer sitting isolated in that corner…  In the wonderful Shimada arc that capped the second cour he’s sitting in the center and interacting with the world.  He’s not entirely free of the idea that people only accept him because he’s got the “golden ticket”, but he is taking those first tentative steps.  (Pushed along by Nikaidō and Hayashida-sensei, pulled along by the Kawamato sisters…)

I enjoyed how they closed the circle in the finale with the standalone bit with Rei in middle school.  But it was also pretty sad when you link that to his homelife with his adoptive father.  Unliked at school, unloved at home, it’s easy to see why he reached for the “golden ticket”.  Not only did it buy him someone sitting across from him, but positive attention from his adoptive father.

And yeah, I see a lot of myself in Rei’s story…  a rocky relationship with my father and often being the odd man out in school.  BTDT.  But like Rei is starting to find out, I eventually found there were other weirdos like me, and they became my friends.   We’re seeing it in Shimada’s workshop, with the Kawamato sisters, and maybe (next season) with the After School Shogi Science Club…  Rei is finding that there are people who want his company, who like him for himself, and who don’t have to be forced to endure him.  That’s a wonderful thing.  Maybe, despite the bleakness, that’s why I’ve never been able to turn away from March.

I’m not entirely certain how the After School Shogi Science Club is going to work out…  but I am intrigued.  I’m also curious about what’s going to happen with the hints that Hinata is starting to get intrigued by/interested in Rei…   I can’t wait until the new season starts in October.

(This has gone on long enough I’m just going to drop this into series review category even though it’s not a standalone post.)

Ep 10…  started with the @$#% “crushing on Sensei”, and took a turn for the weird with a examination of the scientific basis behind Machi’s nature.  I can’t say I enjoyed it very much.   The short scene where Machi suddenly sees a whole new world open up before her was one of the best of the series.

Ep11…  Honestly, I thought this was the finale by the time it was over…  They took pretty much every theme of the show and wrapped it up in a pretty bow.  I particularly enjoyed how the final step has been taken – the non-demi students have gotten involved and the girl’s world has gotten bigger and lot friendlier.

However pleased Satō-sensei’s‘s story was  once again pushed into the background.   Maybe that will be addressed in the season finale, I certainly hope so.

The finale of Konasuba came on like a huge sigh of relief – finally it’s over.  We’re released from our weekly obligation.  This season started slow with the recap episodes… But it was back in top form once those were over and we started getting new material.  The dungeon crawl episodes were classic and laugh out loud funny.  Then we hit the seemingly endless morass of the ‘vacation’ arc.  Not their finest hour, and even the final battle fell somewhat flat.   Everyone got their signature moves in, and then it was over.   A saddening finale to a show I had looked forward to so much.

Maid Dragon pulled off something this week that it hasn’t in quite a few episodes…  It made us laugh out loud.  Honestly, during the performance scenes we could barely restrain ourselves.  That sounds like I’m complaining doesn’t it?  Not at all, the low-key drama that has marked the last few episodes has been outstanding but it was nice to go back to the show’s roots.  Along the way this week, they reinforced how far Koyabishi has come, from reluctantly accepting Tohru because she’s too good hearted to recant on a promise made while drunk…  to accepting that the three of them are a family now.  The end scene, where she was trying to sneak a present “from Santa” into Kanna’s room was an absolute delight.

In some ways…  Ep 9 was the conclusion of Hannabi’s arc.   At last, she’s starting to untangle sex, affection, and friendship.  The first ep of the entire series that I actually honestly enjoyed on it’s own.  Scum’s and 3-gatsu have that in common – while the show is outstanding, many times the episodes are hard to bear.  A conundrum that I’m going to have to ponder in the future.

Episode 10…  was a mess, and intentionally so I suspect because it’s tied up in Mugi’s confusion and internal conflicts.  Between the way he was abused by his senpai and how he’s being abused by Minagawa-sensei for their own selfish pleasure, there’s little wonder that he can’t untangle things the way Hannabi has. He (and Kanai-sensei) are both caught up with the idea that they can “save” her from her self-destructive behavior.  I did expect a more dramatic confrontation with Hannabi, but that she just walked away from her is probably just confirmation of her new found strength.

And I don’t know if it’s good or bad that the most self-aware character in the whole mess is the vile and confused Minagawa-sensei.

At this point, I’m scratching my head.  Even though Kyōko is the least of the girls we’ve seen so far…  and Shōichi is definitely the oddest he’s been so far…  Three episodes in, I have to say this is the most satisfying arc of the three.   I can’t quite put my finger on it, but lacking the forced encounter with Hikari or the odd coincidences of Toru’s arc, this feels much more realistic and organic.  Part of that may be that the childhood friend is such an old cliche in anime…  But the camera is pulling further back from their relationship and spending more time on the role(s) that friends (of both MC’s) are playing in the budding romance, and that also helps a great deal.  Make no mistake though, despite each them placing the other firmly in the “just friends” column they’re both aware that they’re fooling themselves.  They just can’t admit it to the other.

(Pizza break…  I write these entries mostly right in the order you see them and then go back and edit/tighten them up.  And it’s time for a spot of lunch.)

Wrapping things up…  why I’m behind on shows I’m watching by myself.  You see, I’ve only got so much creative energy to go around (on top of last week’s crazy busy schedule) and way too many hobbies.  And this week, I’ve been obsessing over a photograph. 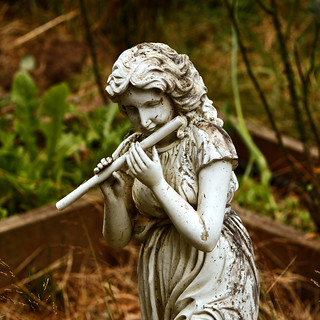 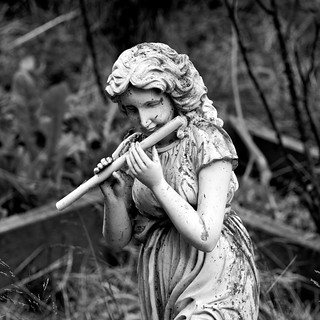 This is two versions of Lonely Piper, a photograph I took almost five years ago at the annual house party held by a couple I’ve known for years.  A year and a half ago, M. died suddenly and last year’s house party was also a memorial to him.  Because she was suddenly widowed and faced with raising two daughters, L. (quite understandably) let her garden slip.   And when I saw how the statue was surrounded by overgrowth, I couldn’t resist photographing it again…

One habit of mine as a photographer is that I often let photographs sit on my hard drive for months or years before processing them…  I’ll look at them occasionally, awaiting the day the shot leaps out at me or a photograph finally tells me it’s ready and what it wants to be.

In this case, that habit was reinforced…  Working with the photographs taken at the party/memorial was hard because M. wasn’t just a geat friend but also one of my mentors in photography.

Late last week, I was doing my usual every-week-or-so slide show of my edit queue, and this photo leapt out at me….

There was also a third version, but it was a real horror and has been consigned to oblivion…  I’m not entirely sure I’m finished yet, but now I’m content to let her rest for a while.  Sooner or later she’ll speak to me and I’ll know.

So, that’s where we stand right now…  There will be a whole bunch of finales in the next week and a half, and they’ll either get standalone entries or maybe they’ll be packaged up in weekly entries.  I just don’t know yet.

Also, look forward to my Spring 2017 preview/anticipation post – later this week or early next.

Have a good one, and thanks for reading!