Busy, busy week… Two finales, several penultimate episodes, and quite possibly the finest episode this season.  All this, some thoughts on the differences between heroism in The Incredibles and My Hero Academia, and more after the jump!

(I’m trying to write this as if I didn’t already know a second season has been announced.)

That worked…  I guess.  The Itou/Ayado relationship was put on hold (mostly due to Itou’s self-effacing nature), and the romance between Tsutsui and Iroha was reconfirmed.  Not that we need it reconfirmed, but that’s how romance anime works.  Other than the revelation that Iroha and her brother were not related, there were no big surprises.  I guess you could say they just coasted into the ending without exerting much effort.

Such coasting isn’t that unusual, but at least the final scene gave a bit of closure.  More of a “our battle goes on” ending than a “go read the manga” ending.

(OK, now writing with the foreknowledge of a second season and treating this ep as more of a “midseason break”.)

I really don’t see where they can go from here that isn’t “more of the same”.  That works in a manga you read weekly or monthly, or in a tankoubon…  But it’s hard to pull off in a continuing anime series.  And the whole deal with her brother has a good chance of heading quickly south into squick territory.

Is it just me, or has the pacing really been off between Eps 10 and 11?  Both of them felt like finales of a sort – but the actual finale comes tomorrow.   I may have just not noticed them before this, but it seems that recently more than a few shows have adopted the “finale and epilogue” structure.

Anyhow, to the business at hand – this week’s finale-but-not-final ep.  The first main thread of the story is that staple of high school anime, the career survey.  Unsurprisingly, none of the girls want to be anything but manga artists.  Only Ruki-chan had any kind of realistic backup plan, to teach nursery school.  This was nicely contrasted with the Matron revealing that she had decided not to become a manga artist, but instead decided to support other budding mangaka by becoming the dorm matron.

The second thread was all about preparing to close down the dorm.  (For good?  For renovations?  I don’t recall.)  The girls are dragooned into cleaning out the storage room, and Kaos discovers some graffiti left by previous students…  Which inspired her to ganbatte (as if she hadn’t been doing that all along) and resulted in her getting a two issue one-shot, her first actual success!

Which… felt off to me as they’ve spent so much time emphasizing how useless and untalented she was and not showing much if any personal growth at all.  I think I’ll have more to say on that in my series review.  It’s not something that really fits here and I need to think it out more.

Ick…  They went in a creeper direction again this week.

Didn’t hit me till I sat down to write this review…  But there’s an interesting common thread between the two segments.  Both involve the protagonist trying to create something that isn’t there for their own selfish reasons.  Seta (the journalist) trying to create the image of a hardened yakuza so that he keeps his job…  and Nitta trying to turn Anzu “to the dark side” (for lack of a better term) basically out of pure selfishness.

Both parts felt a little… forced I guess?  Almost but not quite filler.  In particular the Anzu/Nitta segment was good, but also felt like it was mostly intended to set up the final scene…  Would that make it a two-parter?  I guess so.  It just feels odd here since so far Hinamatsuri has mostly confined itself to self-contained segments and no cliffhangers.

Speaking of the cliffhanger…  Did they drop a hint as to Nitta’s real feelings?  I mean, just moments before he was all “dammit, reality is returning” but there was a flash at the end where he seemed to be in shock and actually care.

Either way – guesses on what happens in the finale?  It’s not implausible that Hina simply got bored and wandered off.  But we still have Mao wandering around out there somewhere, and her appearance in the ‘flash forward’ that opened the series.

Not ashamed to admit that this scene, when it hit me what All Might’s true message was and who it was intended for…  Damm onion ninjas. 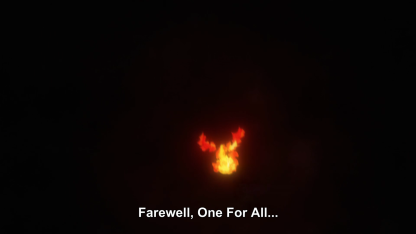 I’ve rarely seen such a crowning moment of awesome…  A capstone for a belief core to Academia‘s entire structure – heroism and strength come not from Quirks, but from deep inside. 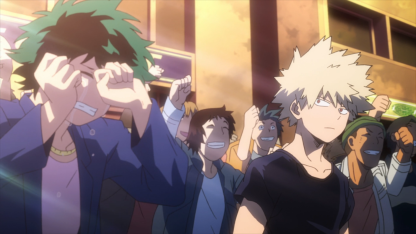 They’re quick moments, but interesting.  Bakugou is very somber and serious during All Might’s final moments as a Hero…  What is he thinking?  Does he see that as raising the bar on what he must do to be the Number One Hero?  The second shot…  I can’t tell if he’s being sympathetic to Deku, or questioning.

It was interesting to ponder on this episode after going to see The Incredibles 2 the next day.  It had never really occurred to me how both address the issue of the legitimacy of superheroes.  The view is less nuanced in The Incredibles – more about the supers, and their duty to use their powers for good and to protect the innocent.  Academia takes the position that it’s less about doing good and more about being good.  Instead of simply being protectors, being a hero is as much about inspiration as raw power.  And it’s not a matter of style over substance, All Might’s wellspring of inspiration comes not just from his attitude and his smile – but from the certainty produced by his deeds.  And unlike Mr Incredible, All Might is self-aware enough to know that this matters. 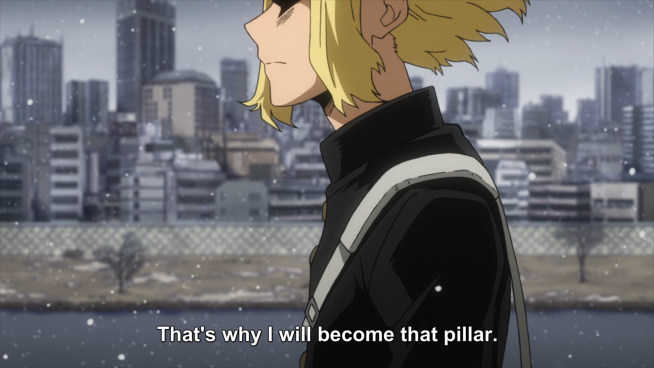 Endeavor, in his self centeredness is much closer to Mr Incredible than All Might…   And I have to wonder if that’s what Endeavor recognized?  As Academia has emphasized again and again is that the true nature of heroism comes from inside the Hero… The ultimate difference between Endeavor and All Might isn’t raw power, but that inner certainty.  Both Shimura Nana and All Might seemed to recognize that drive and nature in their respective proteges.

I liked the first segment a great deal…  The contrast between the aunt and her sense of adventure and niece trying so hard to play it safe was interesting to watch play out.  And did she end up with a bit of a crush on Sui, or is it just me?

I laughed out loud that so many of the reviews had photos of Gure’s latte “art” (which they’d made fun earlier in the segment).  Speaking of Gure, he was the hero of the second segment – rushing off full tilt to procure a key ingredient so that Rokuhoudou would not disappoint any customers.  He’s so earnest, so honest, so clueless (in spots) and so over-the-top.  Gure is rapidly becoming my favorite character that isn’t Sui.

Still building towards the fated (scripted?) confrontation – LLENN v. Pitohui.  SHINC has signed onto this plan (for reasons unclear to me) and throw their chances at winning in order to break M and take his sniper shield out of the equation.  The rest of the episode was basically devoted to showing in various ways what a sadistic, heartless, heedless idiot Pitohui actually is.

The biggest idiocy?  Apparently she and M are using Nerve Gear – for that full “you might die” experience.  Which, as many folks have pointed out, is potentially huge plot hole.  Wouldn’t they have been confiscated?  Wouldn’t the game software be designed to reject a connection from them?  It’s very likely they were confiscated from known survivors.  But what about Gear from those who didn’t go into professional custody (as Kirito and Asuna were).  Or Gear from folks who were unable to log in on the fateful day?  (Like Pitohui herself.)   It’s quite possible (if not entirely plausible) there’s still Gear floating about in the wild.  As to the question of game software – if GGO is built on top of the World Seed framework…  It’s entirely possible that it wouldn’t occur to Kayaba Akihiko to build in such protection.  Why would he?

They’ve referenced Shinon (twice) and Yuuki…  It was inevitable that they’d reference Kirito.

This wasn’t exactly an easy episode to watch…  Not for any great emotional depth, but because of the complete lack of emotional depth.  They tried to sell us on the notion that Tada was silently pining of Theresa-hime and that none of his nosy friends had noticed for six months.  And they failed, abysmally.  They’ve spent a ton of time establishing that Tada has the emotional sensitivity of a turnip, and failing to capitalize on any chance to show him moving beyond that.  This episode was (to paraphrase Karandi) too little, too late.

I’m… not exactly sure what to think of this ep.  It wasn’t quite the epilogue-and-wrap-up that I expected.  It wasn’t quite an actual finale either.  With the time skip and the careful introduction of each character, it felt more like an OVA than anything else.

Either way, we got a final look at most of the girls and their determination to race.  With pretty much the entire cast having their moment in the spotlight there wasn’t time to go into any kind of depth however.  Particularly, they lost their final chance to get inside Silence Suzuka’s head.  I wasn’t really happy with the cop-out ending where “everybody wins”…

This ep was mostly about Naoya…  via a chance encounter at work, he hooks up with a very lonely and introverted Kou.  He ends up working very hard at getting better at video games so he doesn’t feel so bad about hanging out with her ingame.  For her part, she seems to accept that there’s someone who genuinely want to hang out with her despite the whole (tropish) introverted/plain/gamer/nerd thing.  Wotakoi has played fast-and-loose with tropes all season to great effect, but this time it felt forced and seemed to fall flat.  And there’s still a trope waiting in the wings…  I don’t think Nao really realizes that Kou is a girl.

Looking forward…  Should have my Summer preview out later this week.  Haven’t really laid the schedule over a calendar, but SAOA:GGO is going to be the pacing show for my Spring season review.  (Yay, looks like I’ll be working on it across the holiday week.  What fun.)