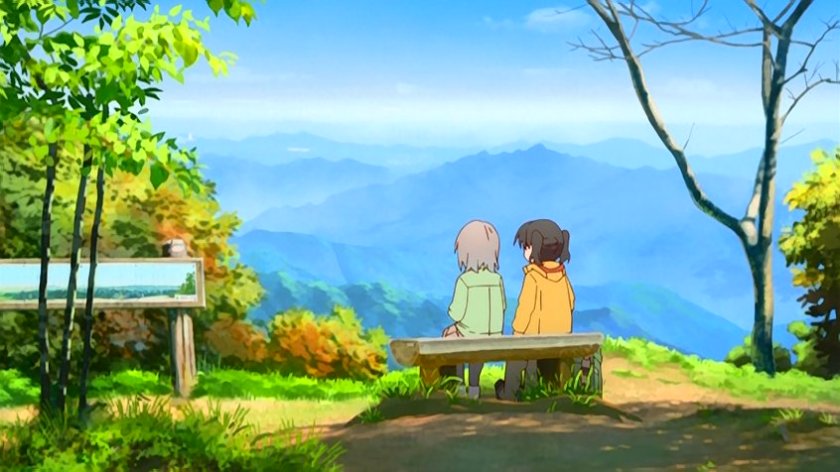 Yama no Susume returns to its roots this week, all that and more after the jump!

(And jeez, I really have to get better at building hype and expectation don’t I?)
The shows that I am watching are in bold, shows my wife and I are watching together are in bold italics, and  marks dropped shows.

They haven’t explained how succession works in their world…  But the situation as described seems odd at best.

If Historia carries royal blood via the Riess family, wouldn’t her (still living) father be the True King and she the Crown Princess?  I can’t figure out how a system would work that would displace Lord Reiss in favor of his daughter.  It could be “youngest available heir”, but that would lead to an awful lot of periods of regency…  Non constitutional monarchies tend to run on personal influence and loyalty, and that means that regencies can (and often do) lead to instability and usurpation of the Throne.

Erwin’s theory is interesting…  And I wonder if the Yaeger family basement has evidence for that theory?  They keep teasing us with the key to the basement (it even appears in this season’s OP).

Is it just me, or should this anime have been called “Immune System at Work”?  :)  :)  Looks like next week they’re going to shake up the formula, and we’ll get a story about White Blood Cell U-1146’s childhood.

Xenodude’s review of this week’s episode, the introductory line is…  well-played indeed.

Laughed my _ss off at the dance sequence.  It started out so serious, like they were calling a Final Battle attack…  And then without a shred of embarrassment it dissolved into complete silliness.  Truly, truly something that could only be done by the best of friends.

Aahh…  Possibly the most “Encouragement of Climb”-like episode so far this season.  I have nothing at ALL against eps 1-5, but episode 6 really showcases what I love about the series.  Mountain climbing, character interaction, and a certain sense of poignancy…  That’s what I’m here for.

Loved the hell out of Hinata and the milk.  Once again, she puts on airs of maturity, and then laughs it off.  Such a scamp.   This also reminded me of the “cooking contest” in ep 3(?) of the first season.

On the other hand, there is a serious lack of Kaede in this season.  Yeah, from a story point of view it makes sense, but she’s one of my favorite characters.

Discussing YnS elsewhere, and trying to describe it to someone who doesn’t watch anime, it popped into my head to call it a coming of age story.  And the more I think about it, the more I convince myself that it’s true.  Especially in Aoi’s case, there’s been a ton of growth over the course of the show.  Yeah, the framing story is on the lightweight side…  but that doesn’t mean there aren’t hidden depths.

Not my favorite episode, for some reason I was never quite fond of the events surrounding the beauty contest.  On the other hand, Cakey joins the cast!  If you haven’t read the manga, she has a rather interesting story arc.  Unless they skip a bunch of stuff, or significantly alter the order they cover things I don’t think they’ll get to her full backstory though.

Also liked Azusa…  “Why are you walking around half-naked?” “um…  because my shirt was wet, duh!”.  Girl has no pretensions, inhibitions – or sense of shame.

Taken in isolation, this was a d_mm fine example of a sports anime…  A little light humor, some nice character moments, and a well-directed and animated one-on-one competition.  You could almost watch this episode standalone and still enjoy the h_ll out of it.  Maybe the bog standard “I wanted to win but I’m still having fun” takes it down a notch, but whatever.

Unfortunately, it’s an episode in an ongoing series, so it can’t be taken in isolation…  As good an episode as it was, Hanebado can ill afford many more detours.  Six episodes in, and they still haven’t done all that much worthwhile with Ayano – who is, in theory, the main character!  I don’t know that I’m looking forward to next week and the return of the twin-tailed oujo-sama.  Looks like we’re going to go from the sublime to the ridiculous.

And so…  the tournament begins.  Despite the fanservice and Gainax physics it was a good episode overall, Harakuna sticks to its guns and takes the actual game seriously.  There’s quite a bit of discussion (amongst teammates) of tactics, when, and why.

No sign of Narumi and Ayasa, so this isn’t the Big Tournament featured in the opening of the first ep.  Also, the mysterious fifth girl who has featured in the OP all along is shown wandering around and observing the tournament.  Future coach/manager?

I love it when they spend time with characters other than the Big Four.  I hate it when they dominate the events anyhow.  OTOH, they’re showing Midoriya’s growth into his destiny – replacing the Symbol of Peace as an inspiration.

Karandi at 100 Word Anime published an interesting essay this week:  Appreciating the Transformative Journey of All Might’s Character.   Especially interesting are her thoughts on All Might’s new role as a mentor.

Cheers for continuing to stand firm on its central idea – Hanako as support staff.  Jeers for taking up the old trope of “food made of love encourages and energizes us!”.

And I’m doubtful of the curry made from leftovers.  I’ve tried doing that myself and the results were unpromising to put it kindly.  Or maybe it was because I used leftover pot roast… but starting from scratch doesn’t work either.  I stick with chicken and pork for my curries because chuck always tastes like pot roast no matter what I do.

Some ponderings on the new style/philosophy

I’m certainly enjoying the new faster/lighter style of blogging but it in one particular way, I’m finding it somewhat stressful.  Previously, I’d tried to be More Serious so that people would take me seriously.  Now I’m afraid that when I am Serious, people won’t notice because they’ve already written me off as a lightweight.

On the other hand…  looking at my comment section, it doesn’t look like people actually notice my more serious points and questions in the first place.

My work at the Fair starts this weekend, so the next three weeks are likely to light if the happen at all…  And then right after the Fair I have two more possible light/if at all weeks because of an SCA event.  Sigh – looks like a good chunk of the rest of this season is going to end up being written off.

And there you have my thoughts on the week!  If you have thoughts or comments, drop me a comment!  Thanks for reading!