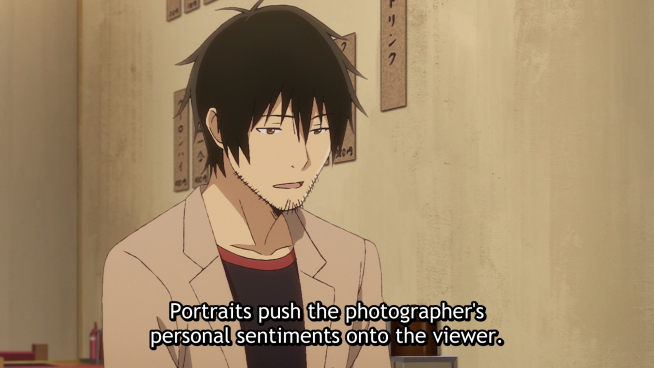 Minato’s thoughts on photography inspired a few thoughts of my own on the topic… I agree with him on some things, disagree on others.  I also look at other ways he can indulge in his budding passion for documentary photography.

Hit the jump and let’s look at some pictures! 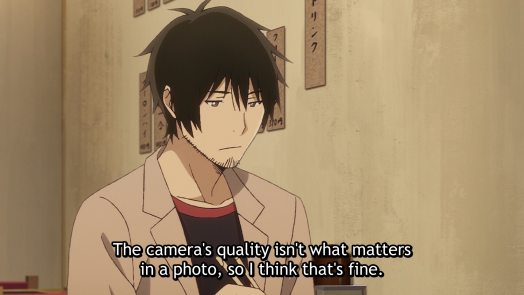 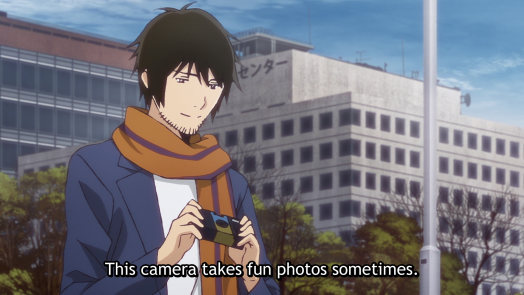 The second image seems to contradict the first, but let’s look at one of my images first… This was taken when my siblings and I visited the beach at dawn when I was home for my mother’s funeral last year.  Even though I had my big camera in my backpack, I chose to use my phone…  It’s faster than my big camera, fits in better in such a situation, and puts me into the scene.  I think Minato chose a disposable because it takes “fun photos” (which I take as meaning snapshots) for much the same reason.  A bigger camera can lead to detachment and emotional isolation rather than being part of the environment.

Which casts an interesting light on his choice…  A camera usually used for snapshots rather than “serious” photography.  (Not that you can’t do so.)  A camera that allows him to be in the moment emotionally when out with Haru.

As a side comment, the rest of the photographs of mine in the post were taken with consumer and prosumer level gear from 2008 or 2010 depending on the image.  (The latter is still my daily carry.)  You don’t need the latest and greatest.

All that being said…  it’s time to dive into the genres/categories of photography Minato discusses in Episode 5.

NOTE:  I am presuming the Japanese terms were more-or-less translated directly and correctly.

Documentary photography is a style of photography that provides a straightforward and accurate representation of people, places, objects and events, and is often used in reportage

Documentary photography usually refers to a popular form of photography used to chronicle events or environments both significant and relevant to history and historical events as well as everyday life. It is typically covered in professional photojournalism, or real life reportage, but it may also be an amateur, artistic, or academic pursuit. 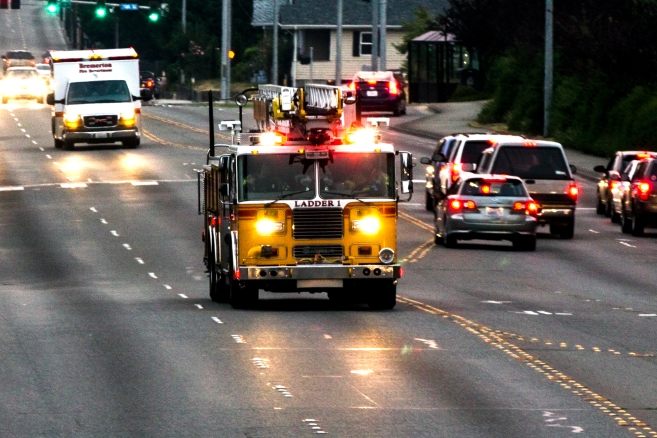 The photograph above is one I took a few years back, just happened to be standing in the right place at the right time…  It’s a classic photojournalism style shot.

As in the photo above, documentary photography is all about impact…  it’s rarely subtle.

And that poses a problem for Minato’s plan to “travel the world” as a documentary photographer.  There’s only two ways to get that impact.  The first is to be in the right place at the right time, or to be able to get to the right place while the event is happening or shortly thereafter.  The other is to travel somewhere and photograph the impact of an ongoing or large scale event.  Neither is conducive to just wandering about, so I hope he has some kind of plan.

Or…  he has some other options too.  I talk about those in the rest of this post.

Side note, two of my favorite series of documentary photographs are the more than a job and emergency response collections centered on Detroit fire fighters by Brian Day.  (Man, I miss Flickr…  What Yahoo! did to it is a crime against humanity.) Today, landscape continues to be a major theme in art with many artists using documentary techniques such as video, photography and classification processes to explore the ways we relate to the places we live in and to record the impact we have on the land and our environment.

Landscape photography shows spaces within the world, sometimes vast and unending, but other times microscopic. Landscape photographs typically capture the presence of nature but can also focus on man-made features or disturbances of landscapes.

Many landscape photographs show little or no human activity and are created in the pursuit of a pure, unsullied depiction of nature, devoid of human influence—instead featuring subjects such as strongly defined landforms, weather, and ambient light. As with most forms of art, the definition of a landscape photograph is broad and may include rural or urban settings, industrial areas or nature photography.

From the point of view of fine art and competition centered photography, Minato isn’t wrong here…  In those fields there’s not supposed to be any evidence of the “hand of man”, and that pretty much leaves them with only beauty to work with.  This leads many landscape photographers to work on a broad sweeping scale…  But personally, I find those to be sterile and boring.  Unless you capture an unusual lighting or weather condition, one beautiful picture of a mountain or field of flowers is much like another. But if you step away from the purist definition…  There’s a larger world to be found, and I suspect it would be right up Minato’s alley.  This picture is one I took a few years back trying to compare and contrast the suburban development in the foreground with the unspoiled Olympic Mountains on the horizon.

Landscape photography, whether broad vistas, or closer views can be documentary in nature too.

A portrait is a representation of a particular person.

But portraits have always been more than just a record. They have been used to show the power, importance, virtue, beauty, wealth, taste, learning or other qualities of the sitter. Portraits have almost always been flattering, and painters who refused to flatter, such as William Hogarth, tended to find their work rejected. A notable exception was Francisco Goya in his apparently bluntly truthful portraits of the Spanish royal family.

Portrait photography or portraiture in photography is a photograph of a person or group of people that captures the personality of the subject by using effective lighting, backdrops, and poses. A portrait picture might be artistic, or it might be clinical, as part of a medical study. Frequently, portraits are commissioned for special occasions, such as weddings or school events. Portraits can serve many purposes, from usage on a personal Web site to display in the lobby of a business.

Here…  I think Minato is letting his personal emotions get in the way of his thinking about and evaluating his own work.  Falling in love with your own work is an error second only to hating your own work.  In some way though, I can’t blame him.  Honest evaluation of your own work is hard.  It’s a difficult skill to master, and even more difficult to keep honed. 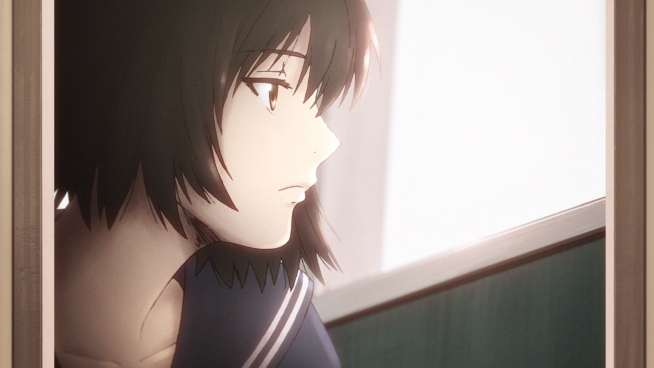 Evaluating his portrait of Haru…  I don’t feel that he forced anything on anyone.  He nicely captured her uncertainty about her future with the juxtaposition of the blank area on the right with her downturned head and slightly averted gaze.

I think he’s just being hard on himself.  Too hard. 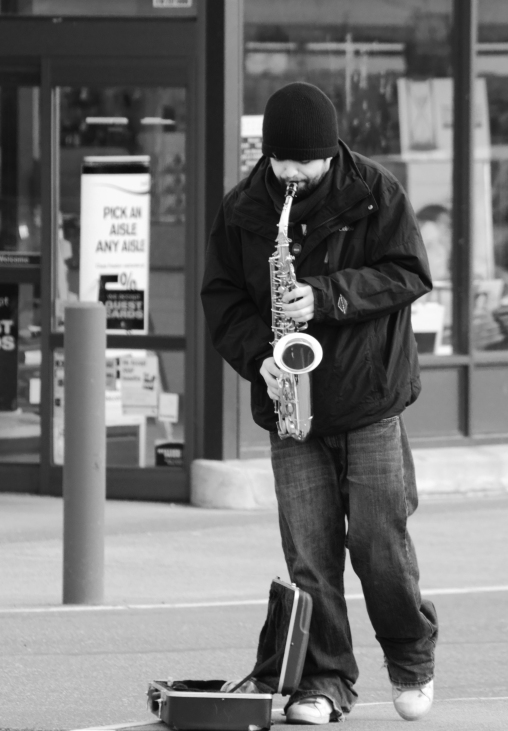 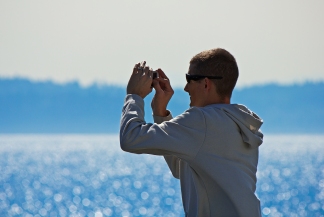 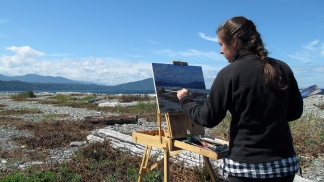 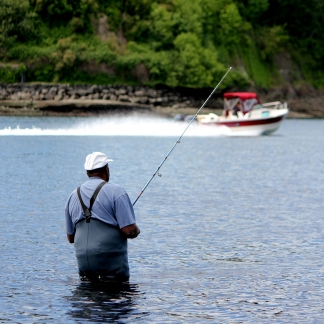 (Click on the individual images to see them full size.)

Backing up from classic and formal portraiture, there’s a lot of places that taking pictures of people can take you…  The busker and the photographer can be seen as social commentary (documentary photography by any other name).  The artist and the fisherman were attempts at capturing the scale of time (something I’ve touched on previously).

Minato, there’s a wide world out there waiting on you…  From your portrait, you’ve got talent…  I think you just need to get out of the box.

Thanks for reading!  I hope it was entertaining and a bit educational…  Drop a comment with your thoughts and let’s chat!