Bit of a bobble this week, posting a day early because I have an appointment tomorrow afternoon. As it works out, only one show gets skipped but such is life. Anyhow, we’ve got a lot to chat about so hit the jump and let’s run down this week’s episodes!

The shows that I’m watching are in bold, shows my wife and I are watching together are in bold italics,  marks dropped shows and (*) marks shows with no comments this week.

Being a sports anime it reaches for that staple of sports anime – pitting the underdog MC’s against another, formidable, team and getting their butts royally kicked.  It’s a well worn trope, but it works and can be used to great advantage to build characterization.

Instead, Cramer basically took twenty minutes of my life that I want back.  All we learned is that one girl is insanely fast, and another is a fangirl of the new coach (a former and famous athlete).  They spent more time on side characters, on the other team, than on any of our putative MC’s.  And that’s setting aside the other new (side) characters they introduced…

Cramer is steadily being crushed under it’s own weight.

One of those moments when you know…  Not only that this would be an important screenshot, but that Kyo has crossed a boundary.  But I mean that in a good way – he knows that Tohru is in pain, and even if he doesn’t clearly understand why he reflexively reaches out to comfort her.  That’s not something he would ever have done before.

Because they were interrupted, we’ll never if he’d try and bluster and blow it off…  But even if he did, that small act of kindness remains.

Harder to navigate is Shigure and Akito’s love/hate/lust relationship…  Whatever happened in the past, whatever caused it to happen, their relationship is a raging fire…  and remember a fire can both serve as warmth and comfort – and bring vast and total destruction.

And I’d be remiss in not mention that it’s complicated by Akito’s view of herself as puppetmaster – controlling the Sohma family by right.

HIGEHIRO Episode 2
Higehiro: After Being Rejected, I Shaved and Took in a High School Runaway
Hige wo Soru. Soshite Joshikosei wo Hirou.

Hmm…  So what’s really up with the phone?  Yoshida is starting to go to increasing lengths to ensure Sayu’s peace of mind.  And he gives in pretty meekly when she orders him about. 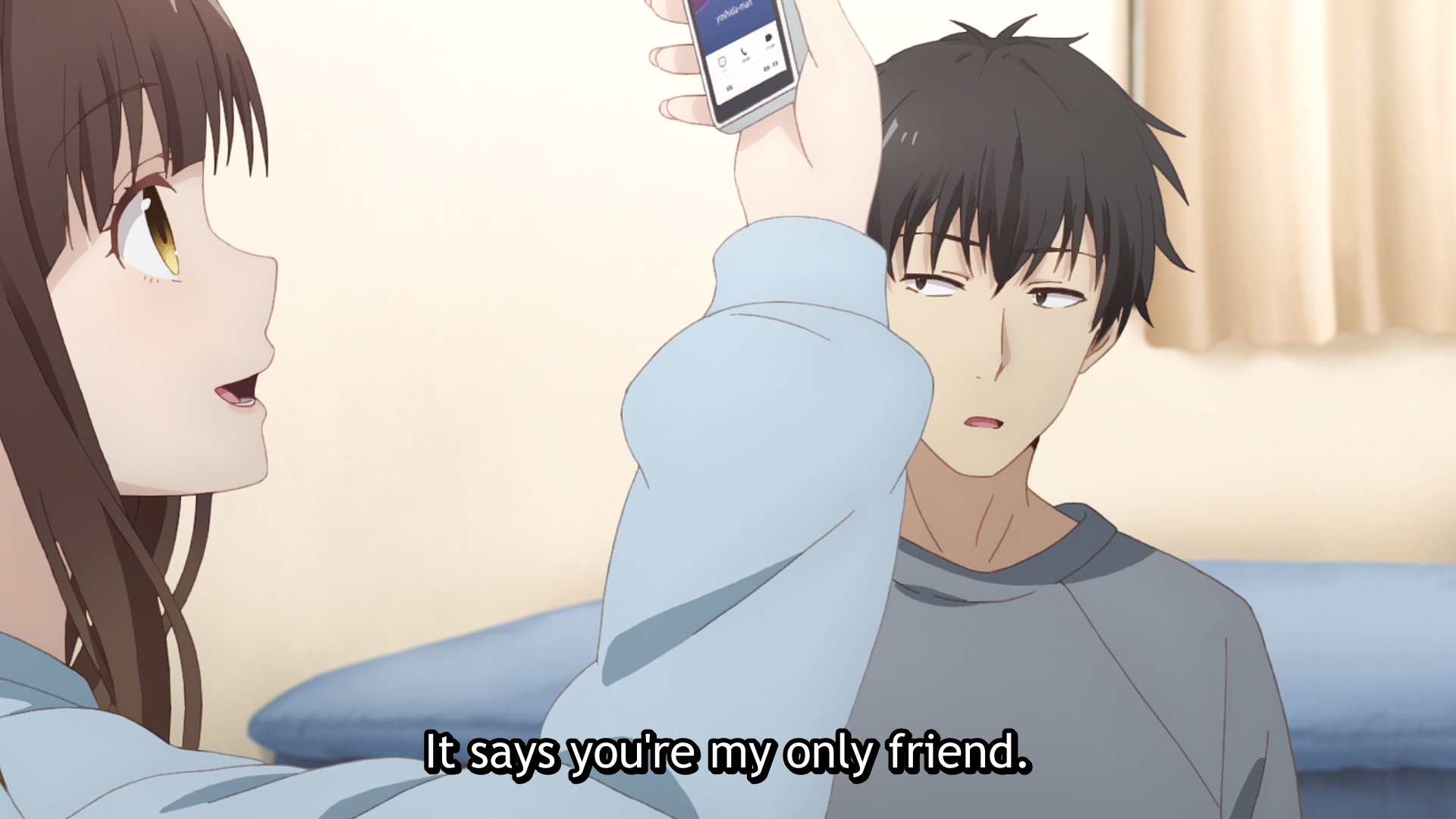 OTOH “you’re my only friend”…  I hope they get more into her background, and handle it well.  There’s a lot of questions there.  Why did she really cut herself off from her friends a family?

And storm clouds are building on the horizon.  More than one person is noting he’s showing obvious signs of being in a relationship.  Yuzuha seems to have missed those signs – and no doubt is setting her cap for him.  Yoshida’s life is about to get really complicated.

Bland?  I mean it wasn’t awful or anything, I just didn’t feel much when the credits rolled.  I laughed a little bit at points, but they didn’t stick if you get what I mean…  This isn’t really a comedy.  It’s really not much of anything so far.

If this episode, telling all about the different kinds of ceramics, is any indication…  This series is headed into some very odd edutainment territory.  Deeper than I expected even a blatant tourism advertisement to go. 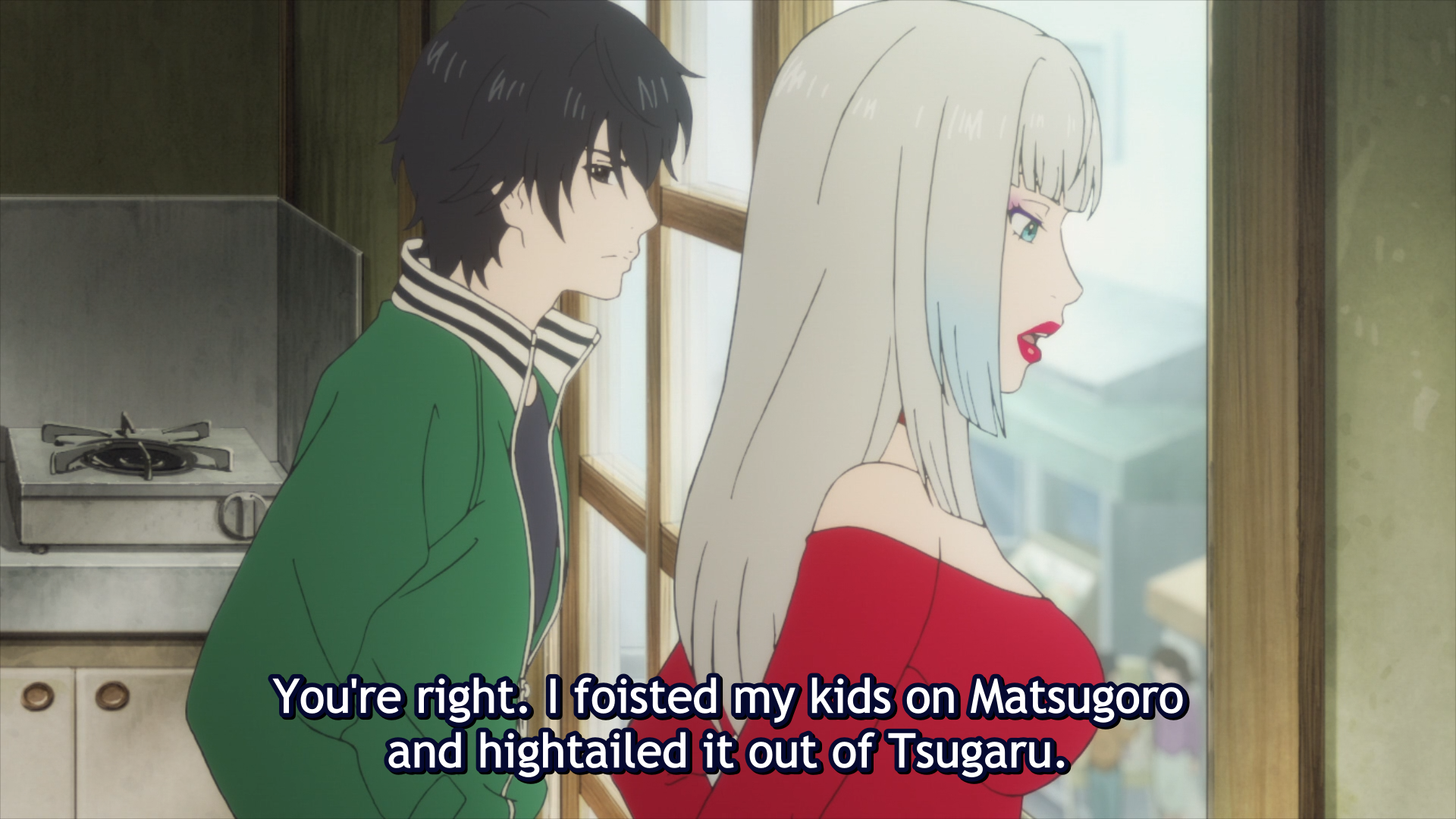 I wonder if Umeko is also from Aomori?  Did she flee the backwater as much as the burden of having children?  I wouldn’t go too far down the latter road, as she’s obviously determined to do right by Setsu if he’s going to live in Tokyo.

At the same time…  There’s a bit of cognitive dissonance.  On one hand, she doing right by Setsu while also seeing him as a potential partner in her performances.  On the other, she’s keeping her involvement at arm’s length and summons Wakana (the elder brother) to handle the business of getting Setsu started at school.

And speaking of Wakana…  No wonder Setsu feels a bit adrift.  He’s been surrounded by accomplished musicians all his life.

Maybe the school club is what he really needs.  A place where he can be mentor and teacher and learn he has a value of his own.

It would not be inaccurate to call this “yet more setup”…  Until Class A and Class B finally meet in battle.  I was pretty impressed with Shinsho’s power-up.  The ability to mimic voices radically decreases the ability/likelihood of the other side to ignore him and thus not be affected by his Quirk.  This elevates him from a Problem (if his opponent screws up) to a Threat.

We also see more of the whatever-is-going-on with One For All.  This is more a case of just waiting out the series, waiting for the situation to become clearer.  It’s very odd however that Deku is having visions that All Might doesn’t seem to have ever encountered.

Kumoko wins her way free of the Labyrinth and defeats a powerful force of her brethren sent to force her to return.  Even though it was once again enlivened by Aoi Yuuki’s voice work, it really was kind of hoh, hum, here we go again.

On the human side however, tension abounds.  The demons may be unified, but the humans, humanoids, and demi-humans opposing them are anything but.  And that’s before Hugo finally makes his (Demon Lord influenced?) move.  There’s war coming on the human side too.

At the end of this episode I was where did all the time go?  I don’t mean the fifteen year time skip in the episode itself…  I mean it solidly held my attention and I didn’t realize that twenty minutes had flown past.

Anyhow, not-killing the Assemblyman fifteen years ago doesn’t seem to have had any butterfly effects.  Despite the past being changed, the future… isn’t.  Which is very odd indeed.  And pursuant to that, Matsumoto (that d_mm bear) pops up and give Vivy her next mission – preventing apocalyptical mass murder from being carried out by an AI.

Only Vivy senses a rat.  But is she wrong?  What is the post credits scene actually telling us?  (You did watch the post-credits, right?)  Is Estella starting the war?  Or preventing it?

And there you have!  Plenty of good episodes this week to balance out the not-so-good…  Sorry for being in a bit of a rush, but I have a vaccination appointment tomorrow at a very inconvenient time for getting any blogging done.

Other than that, I think Thursday will be this season’s blogging day going forward.  It’s just the best fit between the various parts of my schedule.  There’s never going to be a “perfect” day from the point of view of the anime schedule, I’m just going to be late to the part on some shows.

Anyhow, drop a comment and let me know your thoughts this week on anime or anything else that’s on your mind!