Well, here we are again – back for another season!  There’s a couple of premiers to cover, and it looks like I may be saying goodbye to a few in the next couple of weeks!

Which shows make the grade and which might get the gong?  Hit the jump and find out!

The girls go to an art store, and hijinks and fun are to be had.  Then a fairly predictable first-day-at-a-new-school segment.  A fun show to be sure, there’s just not always going to be much to say about it.

The first ep, with a pair of girls at the crossing and the kohai confessing to her senpai on the sly…  was not bad at all.  The second ep, mostly concerning a little pervert dude lusting after a classmate, not good at all.

I guess in an anthology series you can’t win ’em all.

Mostly a long infodump…  Genet questions Honey about her past, thus allowing Honey to explain to us all the requisite backstory.  The fighting scenes were creative and dynamic and provided a much-needed break from the exposition.

I was much better prepared for Hinamatsuri‘s mix of seriousness and comedy this week, and as a result enjoyed the show much, much more.

However, I have no freakin’ idea what’s going on or where the show is going.

Meh, I can’t say I’m at all fond of Kakuriyo.  The second ep was all talk, talk, talk…  And the third ep something of a pointless mess.  How did Grandpa Tsubaki go from a spendthrift libertine (ep 2) to someone the Young Master of the kimono house was afraid of his grand-daughter of marrying into the Tenjin-ya (ep 3)?  And then we’re suddenly back to all about food…  And piling on mysteries and a cliffhanger.

Unless some clarity emerges in ep 4, Kakuriyo may end up being dropped.

I see two different sets of episode numbers for MHA, so I’ll be using both.  The first is the number of the ep within the current season, the second the number overall.

Just as with last season, we had a recap episode and then an introductory episode…  Most of this week was devoted to reacquainting us with Class A and their quirks.  Way too much time was spent on Mineta’s Quirk – Perversion.  If he gets no more screen time this season, I won’t be bothered in the least.

I was tempted to screenshot the bathing scene, but I’ll leave it at this:  MHA did you really have to go there? 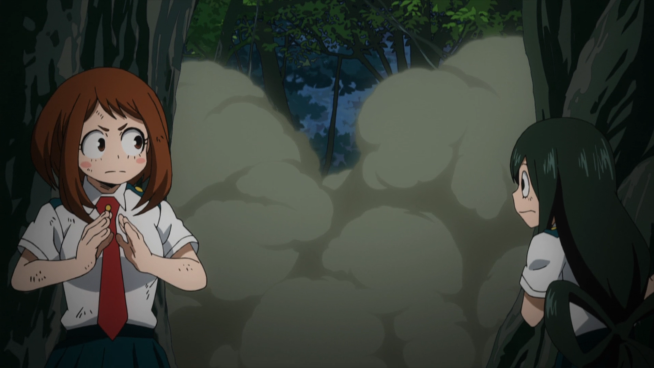 Yeah, we’ve seen all this before, but it was still cool to see Ochako and Tsuyu cooperate to take a monster down – without the help of the main guys.

We’re also introduced to Kouta – an orphaned child who doesn’t think much of heroes as a consequence of his parents, both heroes, being killed in action.  He can’t reconcile his personal feeling of abandonment with the public adulation his parent’s death receives.  I think this arc will be another “what does it mean to be a hero”.

The second ep was just as unlikeable and repetitive as the first.

Frankly, Tsutsui is a bit of a jerk.  But to his credit he’s trying to work out his feelings.  I was kinda surprised at the way they turned things though…  In ep 2 he presented Ioroha with an otaku type figurine he made of her.  But in ep 3 he tried to work with what she liked and taught himself baking.  One the surface he’s afraid of being a normie, but without realizing it he’s starting to value that side.

For her part, despite her devotion to Tsutsui, Ioraha is something of a self-centered bitch…  But is much less self-aware about it.  To some extent she’s almost playing at being a girlfriend knowing that in a few months she’ll transfer away and it’ll be over.  I get the feeling that the rumors swirling about her at school are just the tip of the iceberg of a rocky past.  Though we don’t really see her POV, I think she’s been hurt in the past and is being hurt in the now.  Is that what lead her to offer herself sexually to prove herself to Tsutsui?

The most interesting thing about Kanojo, especially in Ep 3, is that just when you think it’s going to go all tropish – it becomes insightful and relatable.  Mark my words folks, Kanojo isn’t getting a lot of buzz, it should be.

A slow, slow ep dedicated mostly to setting up that characterization of all the staff at Rokuhoudou.  Loving the hell out of the aesthetic of the show, all done in muted colors and detailed animation.  The attention to detail in re-creating a Showa era teahouse was impressive.

Note:  This is a Tuesday “us” show, and thus will likely regularly be a week behind because of my usual Tuesday evening social night.  Unlike Yorimoi I don’t see Yotsuiro as being “big” enough to stay current.

And who buys this “random character generator” crap?  We’ve seen Death Gun’s striking avatar.  We’ve seen our MC’s with avatars that just happen to resemble them IRL in both Alfheim Online and Gun Gale Online.

And the less said about the “boot camp” segment, the better.

Just for reference I looked up the SAO timeline.

Yeah, probably nobody but me cares, but I thought it would be interesting to put SAOA:GGO in perspective with the main series.  April 4th is kind of spooky, even though it shouldn’t be.

Tada-kun started as an “us” show, but when we sat down to watch this weeks ep, my wife decided she wasn’t interested…  So now it’s a “me” show.

This week Theresa-hime starts at school (OK, she’s more than just a tourist), and decides to join a club to get the whole Japanese High School experience.  After a whirlwind tour she joins the Photography Club, just by chance the same club that Tada belongs to.  The balance of the ep was taken up by various Photo Club hijinks.

Yes, I’m going to refer to her as Theresa-hime from here on out.  They’ve done a darn poor job of hiding the fact that she’s anything but a normal high school girl.

I think Tada-kun will get a lot better once it gets all the introduction and setup out of the way.

I am just not feeling it here…  They keep setting up rivals/frenemies, only to forget them five minutes later.  The racing scenes aren’t very exciting.  And they’ve dragged out the “pervert Trainer-san” joke just one too many time.  They set up an interesting story, but haven’t done much with it.

Musume gets one, maybe two more eps.  I can’t take two cour of this.

That was a heck of a nice setup…  It’s no MMO Junkie, but it’ll do.  I am not however sold on Hirotaka and Narumi dating.  It just seemed to happen out of nowhere.  I’d also like to see Narumi act a little more like the adult she’s supposed to be, rather than a leveled up high school girl.  If that’s supposed to be her charm, it’s lost on me.

Nice characterization here…  She’s supposed to be a fujoshi, but she does know and appreciate anime outside her notional wheelhouse.

Still, it’s relatable enough that I’m curious to see where it goes next.

Now that we have HiDive, we’re working through their exclusives from past seasons….  Earlier in the week, we finished the excellent Hakumei and Mikochi from last season.  Charming as hell, and loved it from beginning to end.  Next up is either is Mitsuboshi Colors (a potential “us” show), or Action Heroine Cheer Fruits (a “me” show).

I’m working on it ever as I type, but in a few minutes the Schedule page will be up-to-date with shows and tags.

So, what did you think of this week’s shows?  Drop a comment and let’s chat!