Most shows are getting to the middle third of their arcs…  introductions and set up are over, and now we dive into the meat of things! END_OF_DOCUMENT_TOKEN_TO_BE_REPLACED

Everyone knows about NaNoWriMo. Fewer know about NaHaiWriMo, National Haiku Writing Month – where the goal is to write a haiku every day. I’ve taken part for the last two years, with decidedly mixed results, and I’m jumping in again this year.

Hit the jump to learn more and how you can participate here at the Lounge!

END_OF_DOCUMENT_TOKEN_TO_BE_REPLACED

And now… we’re into week three, for many people a decision point on whether or not they’ll keep watching a show.  What did I drop?  What are you dropping?  Hit the break and find out, then let us know in the comments! END_OF_DOCUMENT_TOKEN_TO_BE_REPLACED

Aaand… we’re off to the races.  Week 2 of a given season is usually an interesting one, the premieres (intended to grab our collective attention) are over and the stories actually begin.  For me, it’s also halfway between the start of the season and the third episode ‘gut check’.

Note: I know some shows only have placeholders (marking what I have seen)…  My original plan was to sit down after dinner and watch the shows I wasn’t caught up on.  Then I’d write my remaining entries, edit them this morning, and publish.  All that never happened.  Miss Rose, one of our guinea pigs, would not eat her dinner and was showing signs of distress.  That wasn’t entirely expected because she is, was, elderly and has been in decline for some time.  We ended up at our vets to see her off across the Bridge so she wouldn’t suffer through the night.  I did not sleep well and I’m still out of it today.

Rather than delay this post, I decided to go with what I have and stick to my schedule by publishing on Monday.  I’ll either publish a supplementary post later this week or incorporate the missing shows in next week’s reviews depending on how my time works out the rest of this week.

END_OF_DOCUMENT_TOKEN_TO_BE_REPLACED

Why week 1.5?  Well, I’m planning on posting each Monday, and after posting the last of the premiers last week I don’t want to wait a week and a half before posting week two and I wanted to get a few more premiers out of the way while they’re fresh.

So, hit the jump and let’s dive in!  Be sure and let us know how your week in anime went, the Lounge is much more about you than it is about me.

Note:  Crunchyroll is still not entirely functional…  wasn’t able to watch any shows Saturday or Sunday night.  They said, a week ago, that they were being DDOSed – but nothing since.  These leaves me behind on a couple of shows I’d hoped to talk about this week.  (And I need to get this written and posted so I can get on with housework… we had a busy weekend and the kitchen is a wreck.) 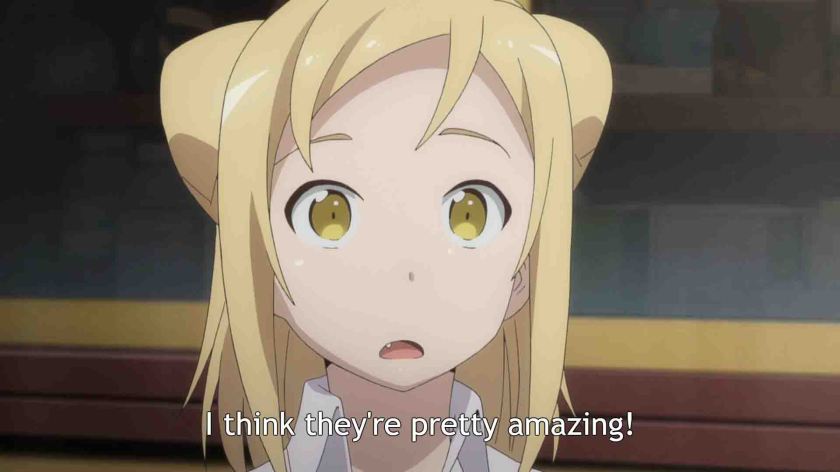 END_OF_DOCUMENT_TOKEN_TO_BE_REPLACED

Welp, the final batch of premiers are in the can and it’s time to take a look at them.  After that, I’ll take a look at my schedule for the remainder of the season.

Be sure and let me know about your thoughts down in the comments!

If you haven’t read them, check out part one and part two as well.

END_OF_DOCUMENT_TOKEN_TO_BE_REPLACED

Seven more shows, and we’re pretty much done with the premieres.  There’s still a few to go, including some biggies like Konasuba 2, but we need to move on to weekly postings soon too…  So this will be the last dedicated first impressions post this season.

That being said, let’s dive in and take a look at the good, the bad, and the “oh-my-diety who thought that was a good idea?”.

END_OF_DOCUMENT_TOKEN_TO_BE_REPLACED

Well, now the first five shows of the season under my belt…  and things are shaky so far.  Two immediate drops, one meh, and two that might not be entirely bad.  Not a promising start, but there’s more premieres to come so I have hope.

See more after the jump, then let me know about your season so far down in the comments.

END_OF_DOCUMENT_TOKEN_TO_BE_REPLACED

With Fall 2016 drawing to a close, and the premieres starting in just over a week… it’s time to look forward to Winter 2017 and new anime.  I try not to get too excited, because you never can tell whether or not they’re going to get picked up…  But it’s still fun to think about it.

Konasuba 2:  More comic adventures, more explosions (but only once a day!), and maybe more Aqua being eaten by a frog… What’s not to like?  “Trapped in another world” (especially a gamified one) is a genre that’s about been done to death, but Konasuba’s comedic take is very refreshing.  The first season was laugh-out-loud funny with fun characters and some nice dramatic touches, I look forward to more.

Looking Forward To – shows I’m interested in checking out for one reason or another:

Fuuka:  Honestly, I can’t put my finger on why I’m looking forward to Fuuka.  Maybe it’s because the female lead reminds me somehow of Ritsu from Kawai Complex. (A character I liked and an anime I enjoyed.)  Maybe it’s because 2016 was bereft of any decent romances and I’m starved for one.  Whatever the cause, I feel compelled to look forward to it.

Little Witch Academia:  I enjoyed the OVA and the movie, while the premise is rather generic, the characterizations and writing were a cut above.  The movie especially was a nice blend of comedy and drama.  But…   The PVs make it look like the anime will be a reboot of the story rather than a continuation, and that moves it down a notch from Eagerly Anticipating to Looking Forward To.  LWA will live or die by whether or not it can maintain the charm of the originals and not drop into being a generic school comedy – only with witches.

Piace: Watashi no Italian:  I didn’t care much for the manga…  which seems kind of odd to say for a show in the Looking Forward To category doesn’t it?  Mostly I didn’t like the extraordinarily slow pace.  (By the end of the first volume, they were still introducing characters.) But it has the bones of a wacky workplace comedy, if only they can tighten the pacing.  Plus I just can’t resist at least checking out anime about food.  These two things together bump it up from “Sure, whatever”.

Akiba’s Trip:  Honestly, I’m checking this out mostly because the OP is sung by Earphones, the voice actress idol unit formed by the main cast from Seiyu’s Life!.

BanG Dream!:  In the wake of the over-the-top success of Love Live! and the more modest success of Wake Up Girls!, mixed media idol projects are slowly becoming A Thing and BanG Dream! is the latest of those to make the leap to anime…  At least for me, they’ve been a very mixed bag though.  The announced plot (girl who dreams of being an idol finds her instrument, meets other girls with similar dreams, and they set off down the rocky road to stardom) doesn’t exactly excite me either.  But I love idol anime, so I can’t resist at least checking it out.

Idol Jihen:  A world where political parties are formed by idol units to fight back against a corrupt government and “save the smiles of the people”…  Sounds like someone decided to file the serial numbers off of AKB0048, slap on a coat of fresh paint and see if it sells.  As with BanG Dream!, I can’t resist at least checking out idol anime, otherwise meh as I didn’t much care for AKB0048.

Seiren:  Romance/comedy…  An original project and the PV’s are playing it close to the chest, so we don’t know too much about the plot.  I’m checking it out mostly “just in case”.

Scum’s Wish:  Highly anticipated by many…  But the one chapter of the manga I’ve managed to read so far left me mostly meh so it drops to the “Sure, Whatever” category.  It may rise, or drop off entirely between now and the premiere depending on whether I get a chance to read more and how I feel about.  Or I may just skip the rest of the manga and let the anime speak for itself.

Urara Meirochou:  On the list mostly because it has the chance to be my CGDCT of the season.

Because of the Crunchy/Funi partnership, it will be interesting to see how the announcements are handled…  In the past Funimation dropped all the shows on us at once, leaving the exact schedule for later.  Crunchyroll on the other hand typically spaces their announcements out, leaving us in the dark.  Sometimes their announcement has come only hours before the show drops.  Two incompatible styles,  but (at least theoretically) one set of announcements.

Two things I’m not happy about are Netflix and Amazon, who are going to get at least one show each this season.  Netflix doesn’t really understand that the anime community they’re trying to woo is built around weekly simulcasts and pushes everything into their binge watching model.  Amazon…  Amazon is the big elephant in the room.  After the disaster that was Battery, they’re trying to pretend the Noitamina deal never went down.  We still don’t have a legal stream of  Fall 2016’s Great Passage, and Amazon will get the much-anticipated Scum’s Wish for Winter 2017 (and Saekano for Spring 2017).  I don’t know how long the deal runs for, but this season and whether or not they stream Scum’s Wish as scheduled could make or break their relationship with anime fandom for the forseeable future.  (And they’re already in rough waters because of the cost.)

A couple of days ago a friend on Facebook asked for recommendations, people’s favorite series on Netflix and Amazon.  For the first time in a while, I looked at Netflix’s anime section and the wonderful Yuuki Yuuna is a Hero leapt out at me…